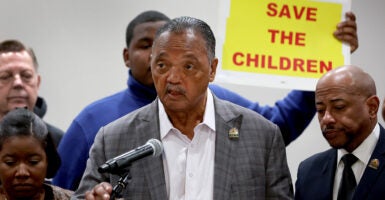 Civil rights groups focused on black Americans have been publicly silent about the D.C. government's vaccine mandate for schools, which could force about 40% of the city's black students to stay out of school. Pictured: Political activist Jesse Jackson joins other Chicago community leaders at an April 27 press conference calling on that city to curtail violent crime. (Photo: Scott Olson/Getty Images)

In the nation’s capital, almost half of the city’s black students ages 12 and over won’t be going back to school this fall. As a result, their already precarious educational situation is primed to suffer even more.

Yet notable civil rights organizations are silent as 40% of the District of Columbia’s black students who are 12 or older are barred from returning to school in person due to the city’s COVID-19 vaccine mandate.

The Daily Signal sought comment from the Black Lives Matter Global Network Foundation, the National Association for the Advancement of Colored People, and the Rainbow PUSH Coalition on the impact that the D.C. vaccine mandate for students would have for black children.

The Daily Signal also sought comment from Ibram X. Kendi, director of the Center for Antiracist Research at Boston University and author of the book “How to Be an Antiracist.”

None of the three organizations responded, nor did Kendi. They also have not released statements on the District’s vaccine mandate.

The Daily Signal also sought comment from Del. Eleanor Holmes Norton, a Democrat who is the District’s nonvoting representative in Congress, on how she thought the mandate would affect her constituents. Norton did not respond.

According to data provided by the D.C. government, 65% of the city’s 94,573 public school students are black. Those numbers include pre-K and adult students as well as K-12 students.

Those black students are disproportionately more likely to be behind their peers in every facet of their education.

For example, the National Assessment of Educational Progress, a test of student achievement produced by the National Center for Education Statistics, reported that math test scores in 2019 for black fourth graders in Washington, D.C. were 47 points lower than those for white fourth graders.

The trend in the NAEP test was even worse for fourth graders’ reading scores in 2019, as black students on average scored 54 points lower than did white students.

Again, black students were the lowest-scoring ethnic group in fourth-grade reading, with the average score for whites 258, Hispanics 213, and blacks 204.

The Washington Post reported that only 28% of black students in kindergarten through second grade across the District were hitting literacy benchmarks in fall 2021, compared with 70% of white students.

The depressed numbers for the District’s black students predate the pandemic. A test given in fall 2019 showed that 44% of black students in D.C. public schools were hitting expected literacy benchmarks, the Post reported.

These statistics come as the District of Columbia begins to enforce its vaccine mandate on students ages 12 and up. All students in that age bracket must be vaccinated against COVID-19, or else they will be unable to attend school in person when the semester begins Aug. 29.

Data from the District’s vaccination information website shows that 40% of black students ages 12 to 17 are unvaccinated or haven’t received a second shot of a two-dose regimen.

As previously reported, The Daily Signal asked D.C. Mayor Muriel Bowser during an Aug. 15 press conference about how the city’s vaccine mandate would disproportionately affect black students age 12 or older, 40% of whom aren’t vaccinated against COVID-19.

The D.C. mayor replied: “I don’t think that that number is correct. We have a substantially fewer number of kids that we have to engage with vaccination.”

The Daily Signal sought further comment last week from Bowser’s office, but did not hear back.

Editor’s note: The language in this report was corrected shortly after publication to reflect that 40% of black students age12 or older are not fully vaccinated against COVID-19. This article was also corrected to reflect that the National Assessment of Educational Progress numbers are for Washington, D.C. students.