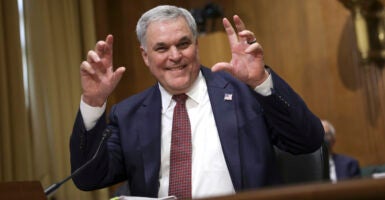 Democrats’ bill, which passed the Senate and House without a single Republican vote, provides $80 billion to the Internal Revenue Service, largely to pay for the 87,000 new agents through 2031.

In an email message Friday to all IRS employees, a copy of which was obtained by The Daily Signal, IRS Commissioner Charles Rettig wrote: “This is a historic time for the IRS, and we are working to move quickly to begin work on the Inflation Reduction Act signed into law earlier this week.”

A key part of our efforts will be the creation of a new, centralized office for implementation of all IRS-related provisions. Building off our successes implementing other major legislative bills, the IRA 2022 Transformation & Implementation Office will work across the IRS and oversee our implementation efforts.

The bill that passed the House and Senate on party-line votes allocates $79.6 billion to expanding the IRS to boost revenue to pay for Democrats’ pet programs.

Estimates show that 57.3% of the Treasury Department’s estimated 86,852 new IRS agents—or fewer than 50,000—would be assigned to tax enforcement.

The new centralized IRS office will be responsible for  “substantive tax provisions as well as the significant transformation efforts,” Rettig said in a separate message to employees Thursday.

The IRS commissioner said that Nikole Flax, deputy commissioner in charge of the Large Business & International Division, will lead the establishment of the agency’s centralized office.

“We have a unique, once-in-a-generation opportunity to transform the IRS in a way to help taxpayers and fundamentally improve our tax administration work that is vital to the success of our country,” Flax is quoted as saying in Retting’s Friday memo. “This is an exciting opportunity, and we will be moving quickly with our work.”

An IRS spokesman told The Daily Signal in an email that separate offices also were established to implement the Tax Cut and Jobs Act of 2017, better known as the Trump tax cuts, as well as the Affordable Care Act of 2010, better known as Obamacare.

The spokesman said the agency could not yet estimate how many employees will work in the new office.

Although Biden and congressional Democrats assert that no one earning less than $400,000 a year will face new taxes, other analysts project that the package as passed will impose a $4,500 tax increase on the average American over the next decade.

Rettig said that in coming days, the IRS would provide details about the new office. He wrote Friday to employees: