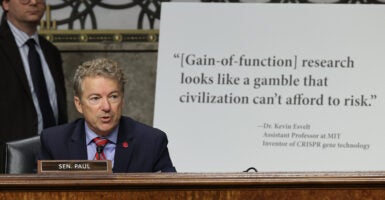 Sen. Rand Paul, R-Ky., chaired a subcommittee hearing Wednesday on gain-of-function research that may be linked to the COVID-19 pandemic. Pictured: Paul questions Dr. Anthony Fauci during a Nov. 4 committee hearing about the ongoing response to the pandemic. (Photo: Chip Somodevilla/Getty Images)

Congress held its first hearing Wednesday investigating whether gain-of-function research financed by U.S. taxpayers could have led to the spread of COVID-19.

“Gain-of-function research has the potential to unleash a global pandemic that threatens the lives of millions, yet this is the first time the issue has been discussed in a congressional committee,” said Paul, ranking member of the subcommittee.

Paul acted as chairman since no Democrats attended the hearing. Sen. Maggie Hassan, D-N.H., is the subcommittee chairwoman, and her name was on the hearing schedule.

The term “gain of function” describes a risky process of making a pathogen more dangerous or contagious for the purpose of studying a response.

In May 2021, Dr. Anthony Fauci, director of the National Institute of Allergy and Infectious Diseases, said the United States never funded gain-of-function projects at China’s Wuhan Institute of Virology.

However, e-mails from Fauci and other federal public health officials showed that Fauci’s agency did fund research that involved making a virus more transmissible from animals to humans.

As previously reported by The Daily Signal, the U.S. government from 2014 to 2019 gave almost $600,000 to the nonprofit EcoHealth Alliance, which in turn used the money to pay for coronavirus research at the Wuhan lab.

The National Institutes of Health, the parent agency to Fauci’s agency, sent a letter to EcoHealth Alliance in July 2020, asking about its relationship with the Wuhan Institute of Virology. NIH also suspended the nonprofit’s grant, pending answers to several questions.

“I’m sure each member of this committee, as well as the full Senate, can agree that we need stronger government oversight of how our tax dollars are being used to experiment with possible fatal diseases,” Paul said at the Wednesday hearing.

Here are four key takeaways from the first hearing on gain-of-function research.

Sen. Josh Hawley, R-Mo., read a statement from Dr. Richard Ebright, laboratory director of the Waksman Institute of Microbiology at Rutgers University, in which he said that National Institutes of Health officials, including Fauci, “lied to Congress, lied to the press, and lied to the public knowingly, willfully, brazenly.”

Hawley read another statement in which Ebright called Fauci’s claim that the NIH did not support gain-of-function research “untruthful.”

Ebright told Hawley: “I stand by my statement.”

“The statements made on repeated occasions to the public, the press, and to policymakers by the NIAID director, Dr. Fauci, have been untruthful,” Ebright said. “I do not understand why those statements are being made, because they are demonstrably false.”

For his part, Fauci consistently has said he did not lie to Congress.

“The problem is that we are so used to thinking of pandemics as a health and safety issue that we have missed the national security implications of identifying viruses that could be deliberately unleashed to kill millions of people,” Esvelt told the Senate panel.

He said that when a disease breaks out, scientists often don’t have to wait to begin studying it, in part because gain-of-function research allows immediate study.

“From a biomedical perspective, that is a triumph, particularly because it only costs a few thousand dollars, and the price is plummeting,” Esvelt said. “But from a security perspective, that means that thousands of researchers could gain access to a novel, pandemic agent as soon as it was identified as such.”

The official line from the Communist Chinese government is that COVID-19 sprung from a wet market in Wuhan and spread throughout the country. A wet market is a term for an open-air, often unhygienic, market that sells fresh meat, fish, and produce.

Dr. Steven Quay, CEO of Atossa Therapeutics Inc., told the panel that scenario is highly unlikely, based on his research.

“There is no dispositive evidence the pandemic began as a spillover of a natural virus in a market,” Quay said. “All evidence is consistent with a laboratory-acquired infection.”

He also said he thinks release of the virus was accidental and not deliberate. He said he understands the conclusion “is not widely held,” but said he would state that under oath and would debate other scientists.

Later in the hearing, he was asked whether he was concerned about China’s continuing to do gain-of-function research.

“In December 2019, they were doing synthetic biology on a cloning vector of the Nipah virus, which is 60% lethal. We just experienced a 1% lethal virus,” Quay said. “My estimate is, that could set us back a millennium. The Black Plague was a 20% lethal event, and it was a 250-year event for civilization to return.”

Sen. Ron Johnson, R-Wis., asked the experts if they agreed with these questions about gain-of-function research: “There’s certainly no benefit that overrides the risk? We shouldn’t be doing this at all?”

Quay said, “My analysis is that [gain-of-function research] hasn’t contributed to the response to this pandemic.”

Esvelt was less certain, but noted the risks are ultimately greater.

“For balancing the potential benefits of prevention against the risk of accidents, it can go either way, depending on the numbers you use,” he said. “When you add the misuse case, that is what blows it out of the water.”

However, Ebright said gain-of-function research on known diseases can be beneficial.

“I believe [that] enhancing the oversight of the research is the more effective and more prudent strategy than simply banning it,” he said.