Is Kansas a Pro-Life or Pro-Choice State? Voters Will Decide 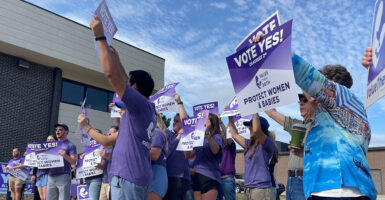 Kansas voters will weigh in Tuesday on a measure known as Value Them Both that specifically says no “right to abortion” exists within the Kansas Constitution. Pictured: Supporters of the amendment rally Saturday in Shawnee, Kansas. (Photo: Caitlin Wilson/AFP/Getty Images)

Kansans are headed to the polls Tuesday to decide how their state will address the issue of abortion.

Voters are asked to vote yes or no on an amendment to the Kansas Constitution, known as Value Them Both, that says no “right to abortion” exists in the state.

“The Value Them Both amendment has really been a movement of the people of Kansas to try to take back control of our policies regarding abortion,” Danielle Underwood, director of communications for Kansans for Life, told The Daily Signal over the phone Monday.

Kansas is the first state to consider abortion on the ballot since Roe v. Wade was overturned by the U.S. Supreme Court on June 24.

Pro-life groups are urging Kansans to vote “yes” on the ballot question, which would change the Kansas Constitution in two ways.

First, if the amendment passes, the Kansas Bill of Rights will clearly state that no right to abortion exists in the state Constitution, nor is the state required to fund abortions.

Second, the amendment would give the Kansas Legislature authority to pass laws regulating abortion in the state.

Passage of the ballot question would mean the following text is added to the Kansas Bill of Rights:

§ 22. Regulation of abortion. Because Kansans value both women and children, the constitution of the state of Kansas does not require government funding of abortion and does not create or secure a right to abortion. To the extent permitted by the constitution of the United States, the people, through their elected state representatives and state senators, may pass laws regarding abortion, including, but not limited to, laws that account for circumstances of pregnancy resulting from rape or incest, or circumstances of necessity to save the life of the mother.

In January 2021, the Republican majority in both the Kansas House and Senate voted to put the abortion amendment on the ballot.

The pro-life effort to pass the amendment comes a little more than three years after the Kansas Supreme Court ruled that the state Constitution protects a women’s choice to have an abortion.

“The amendment on the ballot will mandate government control of our private medical decisions and pave the way for a total ban on abortion,” Ashley All, spokesperson for Kansas for Constitutional Freedom, said in a prepared statement.

“This amendment gives politicians the power to pass any law they want regarding abortion, including a total ban,” All said, urging voters to “protect the constitutional rights and freedom of Kansas women by voting no.”

The pro-life organizations Kansas for Life, Kansas Family Voice, and Kansas Catholic Conference formed the Value Them Both initiative to promote the amendment and educate Kansans on the issue.

The two opposing coalitions, Kansans for Constitutional Freedom and Value Them Both, each conducted grassroot campaigns to win over voters by making phone calls and knocking on doors.

“All eyes in the nation are, at this moment, fixed on Kansas,” Underwood said, adding that her hope is for a “resounding victory” for the pro-life amendment.