Medicare Savings Should Be Used for Improving Medicare, Not Funding Obamacare 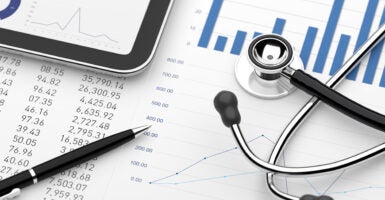 Democrats want price controls on Medicare prescription drugs. But that will just reduce seniors’ access to new and innovative drugs and shift costs to those outside of Medicare. And any savings they get they don’t plan to use to shore up Medicare. (Photo: mkurtbas, iStock/Getty Images)

Under no circumstances should Medicare be milked as a cash cow for other government programs, whether bulking up Obamacare subsidies, funding “climate change” initiatives, promoting taxpayer funding of abortion, or whatever narrow ideological obsession happens to be captivating congressional “progressives” at the moment.

Now get this. In their frenzied attempts to salvage some semblance of the Biden administration’s inflationary domestic agenda, the Senate Democratic leadership is considering a 190-page amendment to impose a complex system of government price controls on Medicare prescription drugs.

Importing price controls into the Medicare drug program is a bad idea. It will reduce seniors’ access to new and innovative drugs and shift higher costs to those outside of Medicare.

In scoring the drug amendment, the Congressional Budget Office estimates that this legislation would save the federal government about $287 billion over 10 years.

What happens to those savings? One would think that because the Medicare hospital insurance trust fund is facing insolvency in just six years, every dime squeezed out of Medicare would go into that deficit-ridden trust fund—or at least offset federal budget deficits incurred by rapidly rising Medicare spending.

But that is not exactly what the Senate Democrats have in mind. In a recent media interview, Sen. Joe Manchin, D-W.Va.—acknowledging that the proposed price control regime would save “about $288 billion over ten years”—suggested: “Take $40 billion of that and extend the Affordable Care Act discounts that people were getting so their premiums won’t go up … And also take the other $240 billion and put it into debt reduction.”

Amidst the crazy congressional spending and raging inflation, Manchin at least got that debt part right. But, as far as Obamacare, he’s got it all wrong. Shoveling Medicare “savings” to cover up holes in Obamacare spending not only ignores Medicare’s fiscal crisis but also ignores the failed Obamacare subsidy scheme that will ultimately cost taxpayers an additional $78 billion.

In fact, not extending the Obamacare subsidies for another year would mean real savings for the taxpayers and would not result in a higher level of uninsurance.

For self-styled progressives, raiding Medicare to pay for their government health care schemes is an old, old story.

Flashback to 1993: The Clinton administration wanted to finance its mammoth proposed Health Security Act (“Hillarycare”) to the tune of $389 billion over the period 1994 to 2000. The proposed method: tighter caps on Medicare spending through tougher price controls that would yield an estimated $124 billion in “savings” over that time period. This attempted raid on Medicare was thankfully stymied by the collapse of the bill.

Flashback to 2010: In promoting Obamacare, his signature legislative achievement, President Barack Obama said he would not “add a dime” to the deficit. The problem: Over the period 2015 to 2024, the Congressional Budget Office estimated Obamacare’s spending would reach nearly $2 trillion.

So, Obama and his congressional allies included a combination of tax increases and spending cuts to pay for Obamacare. Beyond the law’s long list of unpopular tax increases, several of which were subsequently repealed, the CBO reported that the law’s Medicare payment cuts would amount to $716 billion over the period 2013 to 2022.

Incredibly, Obamacare supporters tried to claim that the law’s Medicare payment cuts would not only pay for the new Obamacare entitlement programs but would also extend the solvency of the Medicare hospital insurance trust fund. A classic budget gimmick.

Echoing an earlier CBO assessment of such an outlandish claim, in 2010, Medicare’s actuary, Richard S. Foster, declared, “In practice, the improved HI (Medicare hospital insurance trust fund) financing cannot be simultaneously used to finance other federal outlays (such as the coverage expansions) and to extend the trust fund, despite the appearance of this result from the respective accounting conventions.”

In short, you cannot spend the same dollar twice.

The law also applied another 3.8% “Medicare surtax” on investment income, including income from capital gains, dividends, estates and trusts, and rents and royalties. Revenues generated from this special “Medicare” tax were not earmarked for deposit in the Medicare trust funds but rather a source of revenue for purposes other than Medicare.

Yet another example of using the Medicare label for other purposes.

Flash-forward to today: As part of recent efforts to salvage what is left of President Joe Biden’s “Build Back Better” package, Senate Democrats were planning to expand the 3.8% Medicare surtax on investment income to persons earning more than $400,000 a year and couples making more than $500,000 a year and apply it to business income, including small business income.

It is hard to imagine a worse policy than taxing investment and directly undercutting business and job growth when the country is on the brink of a recession. Because of Manchin’s objections, this provision appears to have been dropped from the Senate proposal.

Make no mistake, Medicare needs reform, but an ill-conceived government price control program that will block seniors’ access to new and innovative medications is not the answer. Instead, Medicare reform should focus on harnessing the benefits and savings from expanding choice and competition.

The savings generated by Medicare reform should be plowed right back into improving the solvency and financial condition of the program and easing Medicare’s rising costs on beneficiaries and taxpayers alike. Savings shouldn’t be diverted to more budget gimmicks or cost shifting.

Taxpayers and seniors deserve nothing less. Congress can and should do better.