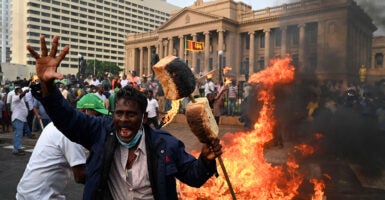 Protesters around the globe are rejecting "green" environmental regulations that are destroying their lives and livelihoods. Pictured: Sri Lankans protest rising prices caused by one such policy at the entrance of the president's office in Colombo on March 15. Four months later, on Thursday, the country's president resigned. (Photo: Ishara Kodikara/AFP/Getty Images)

Sri Lanka is on fire and enraged protesters have stormed the presidential palace. Dutch farmers continue to protest all across the Netherlands by blocking roads with their tractors. Germany, Italy, and Poland have all had their own farmers’ protests, inspired by the Dutch.

Around the globe, protesters are expressing just how fed up they are with failed “green” policies.

The tension has been brewing for a long time. Last December, Sri Lanka’s government banned chemical fertilizers to force the country to move toward organic and environmentally friendly farming.

The results have been catastrophic.

After only seven months, the government was forced to revoke the program as crop yields plummeted and food prices skyrocketed. The New York Times reported that rice prices shot up by nearly one-third, while prices for vegetables rose five times what they were the year before.

Starving and unable to find relief, Sri Lankans began to rise up and revolt against their climate-obsessed government. On July 9, thousands converged on the presidential residence and stormed the gates.

The president wisely fled, promising to resign, and finally did so on Thursday.

Meanwhile, more than 5,000 miles away, Dutch farmers have spent the past three years protesting increasingly odious environmental regulations in their country. Things hit a fever pitch in June when the Dutch government announced a series of plans to try to reduce nitrogen oxide and ammonia emissions 50% by 2030.

The government has blocked the construction of new homes, roads, and airport runways because the required machinery emits nitrogen oxides. Those same oxides and ammonia are two compounds also found in large quantities in animal feces. Thus, the government’s plan to cut down on those emissions would disproportionally affect Dutch farmers.

In response, farmers from across the Netherlands have taken a page out of the “Freedom Convoy” protests in North America and used their tractors to block critical traffic arteries and force concessions from the state.

It’s clear that moves by world governments to prostrate themselves on the altar of environmentalism are neither effective nor popular with their citizens.

They might make Swedish teen climate activist Greta Thunberg happy, but you’d think the country’s leaders would prefer one unhappy Swedish youth to a mob of angry citizens.

And yet, we still see these proposals to fundamentally change the world in the name of environmentalism.

The Biden administration continues to throttle proven domestic energy sources like coal and natural gas, preferring instead to invest in untested renewables like solar and wind. Americans driving to or for work are feeling the most acute impact of these misguided policies.

Even as average gas prices are today $1.50 per gallon more than at this time last year, the administration continues to hold back domestic energy production in the name of climate change. It seems to prefer begging foreign powers such as Saudi Arabia and Venezuela to increase production.

And of course, the Green New Deal is the bad idea that refuses to die.

Research suggests that the financial cost alone to eliminate coal, nuclear, and natural gas from America’s energy mix would be backbreaking, with some estimates as much as a staggering $5 trillion to switch to 100% renewables as the Green New Deal calls for.

But beyond that, as Sri Lanka proves, the central planning and government intervention required by these types of massive climate agendas can easily go awry.

Even supposing nothing goes wrong, as it clearly has in Sri Lanka, do we really trust that the government is capable of effectively transitioning a country in which 80% of its energy comes from conventional sources like coal, oil, and natural gas? Mind you, this is the same government that can’t even get the Department of Motor Vehicles right, let alone mount a monumental undertaking like this.

None of this is to say that in the future renewable energy sources like wind and solar won’t be able to compete, but the government is gambling with people’s lives and livelihoods if it mandates or subsidizes their use.

America’s leaders should keep a close eye on the ongoing revolts in Sri Lanka and the Netherlands. That’s the real result of these climate policies, not the utopian vision the left has.