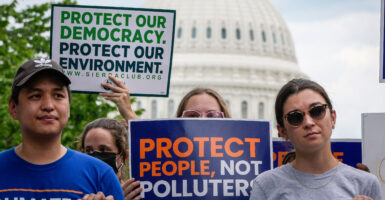 Environmental activists rally near the Capitol on Wednesday to protest the Supreme Court's June 30 decision in West Virginia v. EPA. Their "protect our democracy" complaint was misguided on the ruling, which limited the EPA's ability to regulate carbon emissions from power plants, because the agency had undemocratically overstepped its authority. (Photo: Drew Angerer/Getty Images)

Under the U.S. Constitution, only Congress possesses federal lawmaking power. But anyone familiar with the massive administrative state might question whether that’s true in practice.

After all, federal agencies make a habit of acting as though there’s a special lawmaking power just for bureaucrats.

On June 30, though, there was some good news on the agency overreach front. In West Virginia v. EPA, the U.S. Supreme Court pushed back against an Environmental Protection Agency power grab that went too far.

The court in a 6-3 opinion held that the EPA wasn’t authorized under the Clean Air Act to issue an Obama administration rule known as the Clean Power Plan.

The EPA was trying to utilize a statutory provision dealing with the regulation of emissions from individual power plants to dictate how electricity is generated across the entire electricity grid.

To reduce greenhouse gas emissions, the agency sought to shift electricity generation from conventional sources (coal and natural gas) to renewable sources (wind and solar). In doing so, the EPA was taking action to help kill off the coal industry, with a specific goal of significantly reducing coal-generated electricity.

There’s nothing in the Clean Air Act that says the EPA has the authority to issue such an extraordinary and sweeping rule that would transform the economy and the energy sector. In fact, as the EPA itself stated in 2019 when seeking to repeal the rule during the Trump administration, Congress has precluded that type of generation-shifting scheme.

In this case, the Supreme Court applied the major questions doctrine, which requires a rule of such magnitude to be clearly authorized by statute.

The majority pointed to cases in which it struck down similar efforts by agencies claiming sweeping authority, such as the Food and Drug Administration asserting “that its authority over ‘drugs’ and ‘devices’ included the power to regulate, and even ban, tobacco products,” and the Centers for Disease Control and Prevention claiming it had authority to “institute a nationwide eviction moratorium in response to the COVID-19 pandemic.”

Those are extraordinary cases, as the court pointed out, explaining they are “cases in which the ‘history and the breadth of the authority that [the agency] has asserted,’ and the ‘economic and political significance’ of that assertion, provide a ‘reason to hesitate before concluding that Congress meant to confer such authority.”

The Clean Power Plan is also one of those extraordinary cases.

The EPA claimed it found an incredible and never-before-used power over the energy market in the Clean Air Act through the vague language of a rarely used provision in the statute.

The EPA claimed to have this power, even though it has acknowledged that it doesn’t have expertise on electricity matters. And as explained by the court, “the Agency’s discovery [of the power] allowed it to adopt a regulatory program that Congress had conspicuously and repeatedly declined to enact itself.”

Congress rightfully gets criticized for delegating too much power to federal agencies. But when it comes to the Clean Power Plan, Congress can’t be blamed for excessive delegation. The Clean Power Plan isn’t a reflection of the EPA implementing delegated power, but instead an example of the EPA pushing its own policy agenda contrary to the will of Congress.

As would be expected, there has been left-wing criticism over the court’s opinion and the obstacles it will create for the EPA in addressing climate change. That includes criticism from President Joe Biden.

But it isn’t the job of the court to allow agencies to usurp congressional lawmaking power so those agencies can achieve their desired policy outcomes.

If the left wants misguided policy to dictate how electricity is generated, then Congress needs to pass a law to that effect and not expect an agency without authority to do an end run around the lawmaking process.

Some will claim that that’s easier said than done, given how hard it is to pass laws in Congress.

But such an argument ignores the fact that laws are not supposed to be easy to get enacted, especially laws making sweeping changes. To get a bill enacted, it must pass through a bicameral legislature and get signed into law by the president. Legislators, who are elected and accountable to their own constituents, must negotiate and persuade other legislators who represent different constituencies from across the country to get their legislation passed.

Those hurdles help to get wider buy-in, create predictability, and minimize large swings in national policy (a problem that’s often seen within agencies when new administrations take over).

It creates legitimacy in our laws and faith in our system. And it prevents just the sort of political factionalism that our Founders worried about. Such a process helps to reflect the will of the American people, which is at the heart of any representative democracy.

Justice Neil Gorsuch in his West Virginia v. EPA concurrence and elsewhere has made many of those and other critical points about the lawmaking process.

The implications of West Virginia v. EPA will be discussed and debated for a long time to come. Regardless of those discussions, it’s already clear that in addition to rejecting unauthorized EPA overreach, the Supreme Court has helped to protect the voice of the American people and restore the nation’s republican form of government.