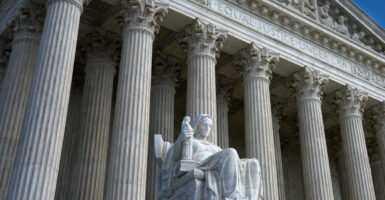 On Thursday, the Supreme Court shut down the ability of the Environmental Protection Agency to completely reengineer Americans’ sources of electricity around a radical climate agenda based on the agency’s expansive interpretation of a narrow provision in the Clean Air Act. The vote was 6 to 3. (Photo: Robert Alexander/Getty Images)

It’s been an eventful month for decisions from the Supreme Court. Monumental decisions on issues of life, the Second Amendment, and religious freedom have now been followed up by West Virginia v. EPA, a decision that has major implications for checking runaway regulators and for the economy.

In short, the Supreme Court shut down the ability of the Environmental Protection Agency to completely reengineer Americans’ sources of electricity around a radical climate agenda based on the agency’s expansive interpretation of a narrow provision in the Clean Air Act.

In doing so, the Supreme Court has made it harder for other regulatory agencies to get away with similar power grabs.

To appreciate the implications of this decision, first consider the things you did this morning to get ready for the day. The alarm on your phone or clock worked. The shower was just the right temperature. Your coffee was hot and the cream was cold. Your clothes are more likely to have matched because of a well-lit room. And you may have turned on a computer to start the workday—all because of electricity.

Americans are extremely blessed to often take for granted all that happens behind the scenes when they plug something into an outlet. Whether we think about it or not, energy is essential to people’s health, well-being, and economic opportunity, and it has been a driver in the dramatic decrease in mortality and extreme poverty over the past century.

This potential for enabling great productivity and growth by individuals, families, businesses, communities, and entire economies is why energy policy matters—and why high energy prices are so corrosive.

Now, imagine if a single federal agency of unelected bureaucrats had a controlling influence over the makeup of the electricity sector. That agency wouldn’t just have influence over power plants, but over the economy. That was the occasion for the Supreme Court’s hearing of West Virginia v. EPA.

In other words, the EPA put itself squarely in a position to set energy and economic policy under the guise of environmental policy while enjoying nearly unfettered power to do so.

One of the many consequences of the plan was that the EPA completely ignored important considerations, such as grid reliability, affordability, consumer choice, and the responsibilities of states. Instead, the EPA’s sole interest was to regulate the grid to achieve then-President Barack Obama’s radical climate agenda mandating a transition away from conventional energy to politically correct renewable energy.

Had the court on Thursday affirmed a near-limitless authority of the EPA to regulate the grid, the Biden EPA was poised to follow up with its own version as a centerpiece of President Joe Biden’s unilateral commitment to the Paris Agreement of 2015.

The Heritage Foundation’s modeling estimates trillions of dollars in damage throughout the economy and to American families, and for no environmental benefit, whether following the Obama administration’s Clean Power Plan or a possible Biden version. (The Daily Signal is the news outlet of The Heritage Foundation.)

In that sense, the court’s 6 to 3 decision in West Virginia v. EPA is very good news for electricity consumers across the country, who are now protected from boundless, unaccountable meddling by the EPA in their electric bills.

However, in many ways, protection from those consequences is an important but secondary issue to whether Congress had even given the EPA authority to do this.

The court rightly determined that the EPA far exceeded its role by creating an authority for itself out of thin air to regulate the electricity sector, and with it a major component of the American economy’s bedrock.

In other words, it mattered immensely how the EPA attempted to regulate greenhouse gas emissions.

That’s why people on both sides of the aisle and of opposite convictions about global warming have opposed the EPA’s attempts to regulate.

At its core, the issue the Clean Power Plan presents is whether EPA is bound by the rule of law and must operate within the framework established by the United States Constitution. …

Accordingly, EPA’s gambit would mean citizens surrendering their right to be represented by an accountable and responsive government that accords with the postulates of federalism.

Tribe called it a “sleight-of-hand [that] offends democratic principles by avoiding political transparency and accountability.”

What West Virginia v. EPA reminds us of is that America is not run by an unaccountable king in the White House and his regulatory agents, but rather by Americans’ elected representatives in partnership with the states.

That expressed will is merely implemented by the executive branch, not the other way around.