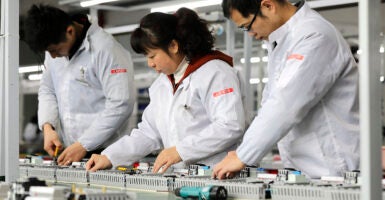 The lack of technological superiority means China’s economic advancement is subject to other countries supplying it with critical chips and capital equipment. That’s why China has been making efforts to reduce its reliance on foreign suppliers and produce more technology domestically.

Apart from economic reasons, the ability to produce key technology of its own would allow China to further pursue its geopolitical ambitions without restraint, such as its self-declaration of sovereignty over Taiwan and the South China Sea.

In contrast, reducing reliance on foreign technology is not an issue for the U.S. Instead, given many countries’ reliance on U.S. technology, the priority for America is to improve its current technology to always keep other countries lagging behind.

China’s late start is the main reason for its inferior level of technology. The communist regime didn’t start actively promoting the industry’s development until the 1980s. Drawing lessons from the experiences of the East Asian Tigers—the four highly developed economies of Hong Kong, Singapore, South Korea, and Taiwan—China had stepped up its efforts by encouraging foreign direct investment in assembling products such as smartphones, laptops, computers, etc., in China.

Despite getting itself inserted into the global production network to make these goods, China did not profit much from being the global assembler and low value-added provider. Instead, China’s export-oriented economic development, based on using and assembling foreign countries’ capital equipment and industrial components, has trapped the nation into technology reliance on foreign countries.

China’s reliance on foreign industrial goods with high technology intensity is evidenced by its growing trade deficit in electrical machinery (including semiconductor chips) from $15 billion in 2001 to $217 billion in 2021, according to data from the Economist Intelligence Unit.

The U.S. was China’s fourth largest import source of electrical machinery in 2021, after Taiwan, South Korea, and Japan. This reliance can also be seen in China’s rush to stockpile equipment from the U.S. last year before new U.S. export restrictions took effect.

In addition, the U.S.’s dominant role in the upstream side of the technology production network has enabled it to restrain the sales of high technology goods to China from its midstream partners. A typical example is the U.S. ban on Taiwan’s TSMC and South Korea’s Samsung from exporting semiconductor chips to Chinese technology manufacturer Huawei. The U.S. was able to do so as the two companies use U.S. technology in making their chips.

And the U.S.’s expansion of licensing requirements in 2020 did not discourage China from purchasing licensed technology from America. According to the U.S. Bureau of Industry and Security, the number of license applications from China for purchasing “tangible items, software, and technology” increased from 3,747 in 2020 to 5,923 in 2021. The total amounts paid for those applications increased from $106 billion to $545 billion. As a result, the licensing amounts per application went up from $28 million to $92 million. In addition, the average processing time in 2021 was 19 days longer than in 2020. In other words, the U.S. export restrictions have made it more costly and lengthier for Chinese companies to acquire license approvals from the U.S.

In trying to reduce China’s reliance on foreign suppliers and produce more technology domestically, the country’s leadership believes that money can solve anything. Although its research and development expenditures as a percentage of its gross domestic product has been notable over the past year, the government-dominated R&D expenditures, including R&D spent by state-owned enterprises, have not yet resulted in significant technology breakthroughs for China.

Obviously, money is not the only means available. But China’s weak regulatory environment to protect intellectual property and authoritarian way of governance have discouraged innovation in the private sector there.

China’s attempts to acquire foreign technology by either theft or coercion show it is unsatisfied with its current technological progress. It understands that slower technological advancement means slower economic growth, which might challenge the Chinese Communist Party’s political legitimacy in the future. It also means the suboptimal development of a military directly competing with the U.S. and of an internal surveillance infrastructure indispensable to the Communist Party’s grip on power.

For a latecomer to the high tech world like China, the direct transfer of technology from more advanced countries is the most efficient way to elevate its level of technology. However, due to declining foreign investment in manufacturing and fewer joint ventures there, China nowadays is less able to rely on foreign investors alone to climb the technological ladder. As such, the government has stepped up its intervention to help Chinese companies acquire technology from the U.S.

China’s rapid economic growth over the last few decades has been based on its joining of the global supply chain network, where the U.S. and its allies hold the technology high ground. China’s direct political confrontation with the U.S. has only exposed its weakness in this solid technological hierarchy and its unbreakable dependence on the U.S. That’s something for the U.S. to build upon and leverage to our strategic advantage.