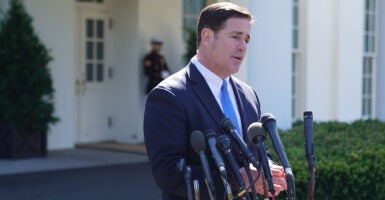 Arizona Gov Doug Ducey—seen here talking to reporters after meeting with then-President Donald Trump at the White House on April 3, 2019—told Arizona lawmakers earlier this year: "Send me the [school choice] bills, and I’ll sign them.” On Friday, they heeded his call. (Photo: Chip Somodevilla/Getty Images) 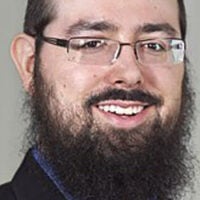 “This session, let’s expand school choice any way we can,” declared Arizona Gov. Doug Ducey in his State of the State address on Jan. 10, “Let’s think big and find more ways to get kids into the school of their parents’ choice. Send me the bills, and I’ll sign them.”

The Arizona Legislature on Friday night answered Ducey’s call, passing a bill to expand eligibility for the state’s Empowerment Scholarship Accounts (also known as education savings accounts or ESAs) to all K-12 students.

Once signed into law, Arizona will reclaim its title as the state with the “most expansive ESA” policy in the nation.

The ESAs are funded with 90% of the state portion of Arizona’s per-pupil funding, including the additional funds for students with special needs.

Currently, about a quarter of elementary and secondary students in Arizona are eligible for an ESA, including students with special needs, students assigned to low-performing district schools, the children of active-duty military personnel, and a few other categories of students.

The Arizona Senate passed HB 2853 on Friday night on a vote of 16 to 10. Earlier in the week, the Arizona House of Representatives passed it by a margin of 31 to 26.

In 2011, Arizona became the first state to enact an ESA policy. Originally, the ESAs were limited only to students with special needs, but state lawmakers have repeatedly expanded the policy over the past decade.

There are now more than 10,000 students benefiting from the ESA policy in Arizona and about 31,000 ESA students in 10 states nationwide.

Last year, West Virginia wrested the “most expansive ESA” title away from Arizona with the enactment of its Hope Scholarship policy, which provides ESAs to all students either switching out of a public school or entering kindergarten.

Once Ducey, a Republican, signs the ESA expansion into law, Arizona will regain its “most expansive ESA” distinction, because the accounts will be available to all students, regardless of what type of school they had been attending.

As a Goldwater Institute report demonstrated, the ESA policy especially benefits students from low-income families. The typical (non-special education) award of about $6,600 covers the median elementary private school tuition and about two-thirds of the median private high school tuition.

Although Arizona does not collect data about the income levels of participating families, the Goldwater Institute looked at data on the geographic distribution of participants and found that “ESA students come from school districts with above-average and below-average poverty rates at broadly equal rates and in virtually identical proportions as traditional public school students overall.”

Additionally, the report found that “the highest concentrations of ESA usage actually occur in the most severely economically disadvantaged communities in Arizona.” Eight out of the 10 districts with the highest share of ESA students statewide have higher-than-average rates of child poverty, and the top three have child poverty rates that are more than double the state average.

The ESAs are extremely popular. According to a Morning Consult survey, 66% of Arizonans and 75% of Arizona parents of K-12 students support the ESA policy.

Nevertheless, opponents of education choice claim that, recent polls notwithstanding, the voters revealed their opposition to a universal ESA policy when they voted by an almost two-to-one margin in 2018 against Prop 305, which also would have expanded Arizona’s ESAs to all students.

However, divining the will of the voters is not so simple. Unlike the current proposal, Prop 305 had a cap on the number of students who could participate. Since the state’s Voter Protection Act requires a supermajority of at least three-fourths of the legislature to make changes to a law passed by the voters on the ballot, even ESA proponents such as the American Federation for Children opposed the measure, as it would have rendered the current program—participation caps and all—essentially set in stone.

Other critics of the program have raised concerns about the quality of education that ESA children receive. “We will not know if students are using our tax dollars … to learn anything,” fretted Democratic state Rep. Kelli Butler.

Proponents of education choice counter that the accountability under the ESA policy is even higher than in traditional district schools. “Parents are the ultimate accountability, not government,” said House Majority Leader Ben Toma, a Republican, the sponsor of the ESA expansion bill. “They know what’s best for their children, and we should trust them to do the right thing.’’

Arizona lawmakers are right to trust families. Arizona has long been a pioneer in education choice—enacting nation’s first tax-credit scholarship policy in 1997, in addition to the first ESA—and the investment in education choice is paying off.

Despite doomsday predictions about the effects that education choice would have on student performance, Arizona has led the nation in gains on the National Assessment of Education Progress over the past two decades.

When families are empowered to choose the learning environment that works best for their children and that aligns with their values, everyone benefits.

Once again, Arizona is setting an example that other states should emulate.