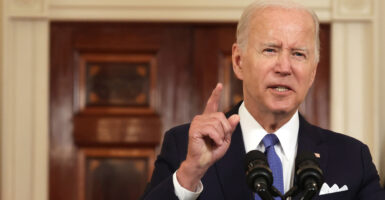 President Joe Biden spoke Friday in response to the Supreme Court decision in Dobbs vs. Jackson Women’s Health, in which the court overruled Roe v. Wade and Planned Parenthood v. Casey. The speech was heavy on outrage, but light on truthfulness. Here are a few of Biden’s worst whoppers.

Claim 1: “Today the Supreme Court of the United States expressly took away a constitutional right from the American people that it had already recognized.”

Biden went on to explain the constitutional right he meant was “women’s right to choose,” which “reinforced a fundamental right of privacy.”

Biden also commented on the history of abortion in America. In the 1800s, it was widely prohibited. “The court laid out state laws criminalizing abortion that go back to the 1800s as their rationale.” But abortion has been legal for the last 50 years. “Fifty years ago, Roe v. Wade was decided and has been the law of the land since then.”

A constitutional right is a right guaranteed by the U.S. Constitution. The Supreme Court wrote in Roe v. Wade that “the Constitution does not explicitly mention any right of privacy.” However, the court proceeded to infer a “right of personal privacy” from various prior rulings and various constitutional provisions. Without definitely establishing where the right of privacy was found, they declared that it was “broad enough to encompass a woman’s decision whether or not to terminate her pregnancy.” The court did not use the phrase “woman’s right to choose” in Roe; that phrase comes from the decision in Planned Parenthood v. Casey (1992). In Casey, a plurality of the court partly overturned and partly upheld Roe.

Biden correctly identified that what he called a “constitutional right” was not endorsed by the court or the law of the land until long after the Constitution and all relevant amendments were ratified. In fact, the “right to privacy” and a “woman’s right to choose” are only recognized in U.S. law because of two Supreme Court cases, which the Supreme Court in Dobbs overturned.

Whatever authority the Supreme Court had to establish such a right, the court has now used that same authority to strike it down. Biden’s characterization of abortion as a “constitutional right,” as opposed to one arbitrarily created by the Court, is: FALSE.

Claim 2: “This decision … made the United States an outlier among developed nations in the world.”

According to Family Research Council, national law in “only six nations” allows “abortion at any point through the entirety of pregnancy.” Those six nations were Canada, China, North Korea, South Korea, the United States, and Vietnam.

By overturning Roe v. Wade, the Supreme Court in Dobbs imposed no national rules prohibiting abortion. Rather, they struck down federal protections for abortion, thus giving the states greater latitude to legislate on this issue. In Dobbs, the Supreme Court made the United States less of an outlier from the rest of the world. Therefore, this claim is: FALSE.

Claim 3: “The court has done what it’s never done before, expressly taken away a constitutional right that is so fundamental to so many Americans, that it had already been recognized.”

Biden repeatedly employed the phrase “had already (been) recognized,” as if the recognition of rights inherently worked as a one-way ratchet; once recognized, they never could be unrecognized. This is the textbook progressive understanding of rights, in which justice advances into the future in an ever-expanding cone of rights.

The closest parallel to abortion in American history is slavery and segregation. Abortion, like slavery in America, required legally denying the personhood — and the natural rights that come with that — of a certain group of people, for the benefit of another group of people. Unlike abortion, the right to property in slaves was protected, or at least permitted, by several provisions in the Constitution. The court formerly recognized that right (Dred Scott v. Sanford, 1857), but has not recognized it since the 13th Amendment was ratified. But slavery was replaced by racially-motivated segregation, which still denied a group of people full equality. The Supreme Court approved this injustice in Plessy v. Ferguson (1896), and it stood for half a century until Brown v. Board of Education (1954). Likewise, the injustice of Roe v. Wade endured for half a century before the court ended it.

Biden’s statement was filled with vague qualifiers — “so fundamental,” “so many Americans” — so that it’s possible for his defenders to argue that it was technically true. However, his statement’s purpose is to argue that there is no prior precedent for the Supreme Court striking down a case like Roe v. Wade. That characterization, fortunately, is: FALSE.

Claim 4: “I believe Roe v. Wade was the correct decision … a decision with broad national consensus, that most Americans of faiths and backgrounds found acceptable.”

Biden meant to say, “Americans of most faiths and backgrounds” (most Americans … of backgrounds?). However, he later admitted that the effort to overturn Roe v. Wade has been in motion for a long time. “Make no mistake, this decision is a culmination of a deliberate effort over decades,” he said. In fact, the effort to overturn Roe v. Wade began almost immediately. On January 22, 1974, a year after Roe was decided, 20,000 people participated in the first March for Life, which has mobilized millions of Americans against abortion over the past five decades.

The Supreme Court explained in Dobbs, “At the time of Roe, 30 states still prohibited abortion at all stages. In the years prior to that decision, about a third of the states had liberalized their laws, but Roe abruptly ended that political process.”

Nor does the substance of Roe (less popular than the demagogued talking point) enjoy a broad consensus, even after it has been the law of the land for nearly 50 years. According to a Marist poll released in January, 71% of Americans, including 49% of Democrats, oppose abortion after the first three months of pregnancy.

There has never been a “broad national consensus” in favor of abortion. Therefore, this claim is: FALSE.

Claim 5: “[State laws are] so extreme that women and girls are forced to bear their rapist’s child. … Imagine having a young woman having to carry a child as a consequence of incest with no option.”

Most pro-abortion rhetoric for decades has relied on the fiction that overturning Roe v. Wade would prohibit all abortions anywhere (hence the polling that shows higher support for Roe v. Wade than for the extreme provisions it contained). But this is not true. Now that Roe v. Wade has been overturned, abortion policy returns to the governments of 50 states, which can each enact the laws they see fit.

Biden himself admitted this. “Many states in this country still recognize a woman’s right to choose,” he said. “So, if a woman lives in a state that restricts abortion, the Supreme Court’s decision doesn’t prevent her from traveling from her home state to the state that allows it. It doesn’t prevent a doctor in that state from treating her.”

Pro-abortion rhetoric also emphasizes cases of rape and incest, the cases where the woman’s plight is likely to attract the most widespread sympathy (but, since the baby didn’t get to choose his or her parents, such an abortion is just as unjust as any other). Such emphasis is misplaced, as cases of rape and incest account for less than 2% of abortions. Additionally, instead of helping abused women, abortion businesses have sometimes covered up for abusers.

Regardless of the emotionally charged questions of rape and incest, the fact remains that Biden contradicted his own claim by explaining how women can obtain an abortion. Anyone who wants to obtain an abortion can travel to a state where it remains legal and obtain one. Therefore, this statement is: FALSE.

To get a more accurate picture of what abortion policy in America will look like going forward, check out Family Research Council’s interactive maps showing the landscape of state policy in the post-Roe era.