Best Teachers Could Be Your Parents, ‘Homeschool Awakening’ Documentary Suggests 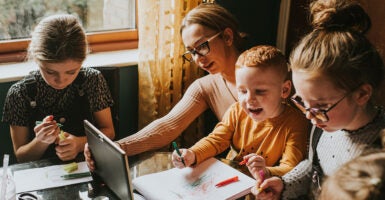 Parents who homeschool become more involved with their children's education, and most are glad they did. Fourteen homeschooling families are featured in the new documentary "The Homeschool Awakening." (Photo: Catherine Falls Commercial/Moment/Getty Images)

Actor Kirk Cameron’s new documentary “The Homeschool Awakening” features 14 homeschooling families. Those families, failed by the public education system, have embarked on a homeschooling journey, and they share how the decision has changed their lives.

Like most other American families, those parents initially sent their children to public school because “it’s just what you do.” The public education norm controlled their family life, but they began to question it.

“As a mom with my first baby, you are just with them 24/7, but then all of a sudden, time for school and the kind of unnatural feeling inside of me: ‘Is this really what I should be doing, dropping them off for a lot of hours, somewhere else?’” asks Cameron’s wife, Chelsea. The couple has six children, all of whom were homeschooled.

Should it be the norm for a 6-year-old to spend eight hours away from his or her mother? Should the norm be for parents to have no idea what their children are being taught? Should the norm be considering a child smart based on how they compare with their peers? The 14 featured families are driven to challenge these norms and more through their homeschooling lifestyles.

The parents addressed common concerns brought up by non-homeschoolers, such as whether homeschooled children would be socialized or whether the parents themselves are qualified to teach their own children.

How do homeschooled children socialize? Well, do you consider socialization sitting at a desk next to someone for eight hours a day, with an hour for recess? Or is socialization, as these homeschooling parents suggest, the freedom to pursue friendships with individuals of their choice as opposed to who they are placed next to in class.

Many parents have the misconception they’re not qualified to teach their children, but Kathy Koch, the author of “8 Great Smarts: Discover and Nurture Your Child’s Intelligences,” and who holds a doctorate in reading and educational psychology, said, “Homeschoolers, we don’t teach content. We teach children.”

She added, “One of the greatest advantages of homeschooling is learning with the kids.”

“We redeemed over 16,000 hours to be with our kids just because we chose to home-educate our children,” one father noted.

The parents in the film realized their responsibility in shaping their children’s minds. The benefits of homeschooling outweighed the sacrifices. The parents explained how homeschooling set them free to individualize learning unique to each child’s needs, and his or her style and pace of learning; to preserve their child’s identity, protecting them from negative outside influences; to deepen their relationship with their child through one-on-one time; and to allow for free, healthy discourse in their homes.

As a former homeschooled student myself, I thought the film did a fantastic job showcasing the joys and freedom homeschooling offers while also including the common worries parents might have before they homeschool.

The film did not offer a look into homeschooling as in depth as a personal experience would, but I think it would be helpful for those parents even slightly contemplating homeschooling to get a feel for the lifestyle and benefits it offers.

The film concluded by featuring children expressing gratitude to their parents for homeschooling them.

As one son said, “It is so easy to buy into the narrative you need to be this, you need to be that, that you lose your own sense of identity. I don’t know why you are here if you are just trying to be someone else. The greatest gift I was given was my own identity and the ability to do things my way.”

“The Homeschool Awakening” was shown in theatres on two nights only last week, but post-theatrical release plans will be announced on thehomeschoolawakening.com.