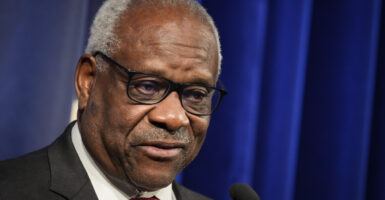 In an opinion written by Justice Clarence Thomas, the Supreme Court rules that the Second Amendment gives Americans the right to carry firearms in public places for self-defense. Pictured: Thomas speaks at a Heritage Foundation event Oct. 21 marking his 30 years on the high court. (Photo: Drew Angerer/Getty Images)

The Supreme Court on Thursday issued its first significant opinion in a Second Amendment case in well over a decade, striking down a New York state law that effectively denied ordinary residents the right to carry a firearm in public for self-defense.

This decision, in New York State Rifle and Pistol Association v. Bruen, is a major victory for the sanctity of the Constitution, the integrity of the Supreme Court, and the personal safety of all Americans who choose to protect themselves with firearms.

In an opinion written by Justice Clarence Thomas, a majority of six justices affirmed that the Second Amendment means what it says—“the people” have a right not just to keep but to bear arms, including in public places for self-defense.

As a result, New York and other states with similar laws cannot continue treating this fundamental constitutional right as a unique privilege for the select few who government officials believe are sufficiently justified by a special “need” to protect themselves.

New York is one of only six states that have “may issue” licensing frameworks for the carrying of firearms in public, meaning that government officials have broad discretion to deny public carry permits for law-abiding applicants.

These six states also generally require—as New York does—that applicants demonstrate that they have “good cause” or “proper cause” for wanting to carry a firearm in public, which is often a demanding standard that ordinary residents rarely meet. New York City’s police department, for example, requires that applicants prove they are in “extraordinary personal danger, documented by proof of recurrent threats to life or safety.”

The petitioners in this case were two law-abiding New York residents who applied for unrestricted licenses to carry firearms in public, citing a general desire to defend themselves should they be violently victimized. Both had their applications denied because they did not “face any special or unique danger to [their] life.”

In other words, the government told the two residents they had no real reason to fear for their safety in public places, so the right to “bear arms” didn’t apply to them. They challenged the “good cause” requirement in federal court, claiming that it violated their Second Amendment rights.

The lower courts dismissed the complaint and cited two previous 2nd Circuit Court of Appeals cases that upheld the New York law as “substantially related to the achievement of an important governmental interest.”

The Supreme Court last fall granted certiorari—that is, agreed to review the case—after nearly 12 years of silence on Second Amendment issues, during which time lower courts routinely ran amok over the high court’s precedent in cases such as District of Columbia v. Heller (2008) and McDonald v. City of Chicago (2010).

What the Supreme Court Held

The majority of justices held that the Second Amendment protects an individual’s right to carry a handgun for self-defense outside the home, and that “good cause” requirements such as the one implemented by New York are unconstitutional because they “prevent law-abiding citizens with ordinary self-defense needs from exercising” this right in public.

In doing so, the high court explicitly rejected the interest-balancing approach relied upon by many lower courts when analyzing Second Amendment cases, which often results in gun control laws being upheld under a standard known as intermediate scrutiny.

Instead, the court spelled out an analytical framework that considers whether a challenged regulation is “inconsistent with the Nation’s historical tradition of firearm regulation.”

Under this framework, the court determined that New York simply could not meet its burden of demonstrating an American tradition of “broadly prohibit[ing] the public carry of commonly used firearms for personal defense or generally requir[ing] law-abiding responsible citizens to ‘demonstrate a special need for self-protection … ’ to carry arms in public.”

What Does This Mean Going Forward?

So what does the Supreme Court’s decision in this case mean for gun owners, other gun laws, and the future of the Second Amendment?

First, it’s important to remember that only six states have laws like the one challenged in New York. The court clearly explained that the ruling “should not be interpreted to suggest the unconstitutionality” of laws in other states where “a general desire for self-defense is sufficient to obtain a [permit].”

Although the justices didn’t “rule out constitutional challenges to shall-issue regimes” that are “put toward abusive ends,” the immediate impact is only for gun owners in the few states with “may issue” laws.

That still means, though, that for tens of millions of Americans residing in those states, the Second Amendment’s protections finally will become a practical reality. New York and other “may issue” states will have to reconfigure their laws to ensure that ordinary citizens are allowed some method of carrying firearms in public for self-defense.

But, as many commentators long suspected, the high court’s ruling does not immediately endanger the public carry permitting laws required by other states, nor does it signal that all states must adopt a permitless carry approach.

Second, the court’s clear rejection of intermediate scrutiny and use of a “text, history, and tradition” standard for analyzing Second Amendment cases sets a much-needed limit on lower courts’ future ability to undermine Supreme Court precedent with “means-end” and “interest-balancing” tests. Lower courts now have a much clearer road map for analysis, which means they will have less “wiggle room” to find any and every gun control law constitutional—a significant problem over the past decade.

Third, as Justice Samuel Alito suggests in his concurring opinion, residents in these six “good cause” states will finally be able to defend themselves more meaningfully in public when the government cannot—which is, sadly, most of the time.

The Second Amendment always has been centered on the natural right to self-defense, and, Alito added: “Today, unfortunately, many Americans have good reason to fear that they will be victimized if they are unable to protect themselves. And today, no less than in 1791, the Second Amendment guarantees their right to do so.”

For far too long, New York and states with similar laws have implemented a government monopoly on armed self-defense in public, often while boasting about failed criminal justice policies that routinely place law-abiding citizens in grave danger. Six justices spoke Thursday for the tens of millions of Americans residing in those states: The right to bear arms applies here, too.