Don’t Draft Our Daughters—or Anyone Else 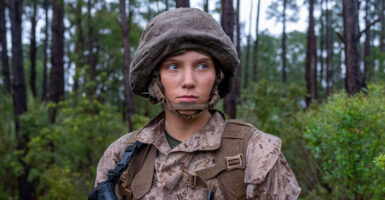 A female U.S. Marine Corps recruit listens to a drill instructor before going through an obstacle course during a training exercise on March 24 at Parris Island, South Carolina. (Photo: Robert Nickelsberg/Getty Images)

Last year, Congress considered a very bad and ill-considered idea. With no debate and no real scrutiny, there was an effort to add to the annual National Defense Authorization Act a provision to require young women to register for military conscription.

The provision was dropped. Proponents will quietly try to add it again this year. It’s still a bad idea. Conservatives in Congress should have nothing to do with this wrongheaded proposal.

Before Congress blithely signs off on drafting our daughters, it first ought to consider the question—is that what Americans really want?

If this is such a pressing reform, why has it never been the subject of a national debate? Why didn’t President Joe Biden make the case when he ran for president in 2020? Why isn’t every candidate for office being asked about the issue in the run-up to the midterms in 2022?

Drafting our daughters is following an all-too-familiar pattern of implementing consequential social change without seriously looking at the consequences.

Many states, for example, have forged ahead with so-called gender-affirming medical treatment with almost no serious consideration of the impact on our children.

If proponents really think registering women for the draft is an urgent issue, they had a whole year to make their case. Instead, they have been operating in stealth legislating mode.

For that reason alone, we should all be asking for a big timeout on the issue.

The superficial argument for drafting our daughters is that it is an issue of equity. We make men register for the draft, so why not also women?

That argument raises a second red flag. Women already have widespread opportunities to serve in the armed forces. This initiative won’t promote equal treatment or opportunity for women.

This sounds suspiciously like every woke campaign started by the left that begins with making a case that it’s all about “fairness,” when what’s really intended is a small first step for a radical agenda.

It would be naive to ignore the fact that there’s a similar campaign already underway against America’s armed forces on issues ranging from climate change to transgender service opportunities, even though the initiatives directly contradict the dictates of military readiness.

If there was a compelling national security case for conscripting women, it would be different—but there isn’t.

The reality is that the current system of U.S. conscription is an anachronism that serves no useful military purpose. Rather than talking about drafting women, we ought to be asking why we perpetuate a draft at all.

Registering for the draft is not an act of patriotism that builds civic virtue. It’s just a legal requirement that, beyond registering, requires individuals to do nothing.

The brutal truth is that even if the U.S. tried to draft Americans, the system would produce almost no manpower. The vast majority of American youths, for various reasons, don’t qualify for military service.

If the U.S. reinstituted a draft, we would be drafting from the small pool of American youths who are already volunteering for military service. That makes no sense.

Rather than tackling real issues, like the social, cultural, and health issues making American youths ill-prepared to serve, and focusing on creating more opportunities and options for service in the all-volunteer force that would contribute to military readiness, Congress will yet again toy with an empty gesture that would do nothing about meeting the constitutional obligation to “provide for the common defense.”

Congress can do better than playing with yet another “draft our daughters” bill that means nothing for America’s defense and insults the American people by saying they don’t have the right to make decisions about service to the nation for themselves.