By the Numbers: How Many Men in California Prisons Identify as Women 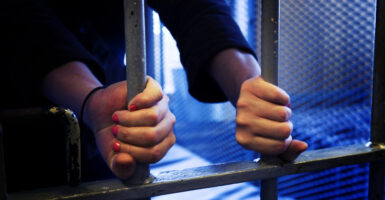 A section of the California prison system's website includes this question: “Does a transgender person have to have gender-affirming surgery to be housed at an institution that matches their gender identity?” Answer: no. (Photo illustration: Getty Images)

California’s prison population includes 1,115 biological males who say they identify as women, according to the state’s Department of Corrections and Rehabilitation.

About 1 in 3 in that population has requested transfers to women’s prisons, but only about 1 in 10 of those requests have been approved, the corrections department says.

California’s prison agency provided the statistics in response to a Freedom of Information Act request from the Oversight Project, the government watchdog division of The Heritage Foundation. (The Daily Signal is Heritage’s multimedia news organization.)

A women’s advocacy group sued the state of California in November to overturn a law allowing biological males to be housed in women’s prisons after a female inmate said she was raped by someone the prison called a “transgender woman with a penis.”

A section of the corrections department’s website devoted to “frequently asked questions” includes this question: “Does a transgender person have to have gender-affirming surgery to be housed at an institution that matches their gender identity?”

The department provides this response: “No. All housing for incarcerated people is evaluated on a case-by-case basis, which includes their criminal history, behavior, rehabilitation opportunities, medical and psychiatric needs, [and] program needs as well as their safety and security.”

Legislation passed by the California State Assembly—SB 132, called the Transgender Respect, Agency and Dignity Act—took effect Jan. 1, 2021. The new law allows incarcerated transgender, nonbinary, and intersex individuals to request to be housed and searched in a manner consistent with their gender identity.

In 2003, Congress passed the Prison Rape Elimination Act, which prohibits making decisions on prison housing based on an incarcerated person’s genitalia.

“All incarcerated individuals have a basic right to safety while serving their sentence in the California prison system,” Dahle told The Daily Signal in a written statement, adding:

If people are under the prison system’s care, we should do everything in our power to prevent cases of sexual assault. I voted against SB 132 when it was in the State Assembly and it is a tragedy to hear that there are cases that have come as a result of this poor policy.

As of May 23, 1,549 state inmates identified as transgender, nonbinary, or intersex, according to the corrections department. That means the 1,115 who are biological males identifying as women make up the largest subset of that group of inmates.

Also as of May 23, a total of 342 biological male inmates who identified as women had requested to be transferred to a women’s prison. Of them, 39 were approved for transfer to a female institution, according to the corrections department. Another 14 were denied a transfer and 28 changed their minds about making the move, the agency said.

The California Department of Corrections and Rehabilitation “is committed to continuing to fully implement” the new law and to “safely housing everyone in its facilities,” spokesperson Terry Thornton told The Daily Signal in an email.

“This is important as national data shows transgender people experience the highest rates of sexual victimization inside prisons and jails,” Thornton said.

Heritage’s Oversight Project also asked California’s prison agency how many biologically male inmates who identify as female have at least one conviction for sexual abuse or a sexual assault.

The corrections department responded:  “We are still working with another unit on this item.”

Asked how many of these inmates have been charged with a sexual abuse or sexual assault offense while in prison, the department responded that “reporting mechanisms do not track sexual assaults by gender identity.”

“Requests for transfer are voluntary; CDCR does not collect and cannot provide information on individual decisions to make, or not to make, a voluntary request for searching or housing based on gender identity,” Thornton, the department’s spokeswoman, said.

The complaint argues that incarcerated women have experienced “fear, anxiety, depression, and/or post-traumatic stress disorder” because of residing, dining, and showering with biological males. SB 132, the lawsuit says, violates the First, Eighth, and 14th amendment rights of female inmates.

In April, the state filed a motion to dismiss the case. In early May, four incarcerated biological males who identify as women filed a motion to intervene in the case, to which the Women’s Liberation Front recently filed a response.

“There is more to come. We will have witness declarations, information from plaintiffs, and information from more inmates,” Lauren Adams, legal director for the Women’s Liberation Front, told The Daily Signal in a phone interview. “Some of the conditions for women in these prisons are horrifying.”

Among the plaintiffs is Krystal Gonzalez, who says she was raped at Central California Women’s Facility by a male who said he identified as a woman.

According to the lawsuit, after Gonzalez requested to be housed away from men, the prison’s response referred to her alleged attacker as a “transgender woman with a penis.” The lawsuit adds that “the psychological distress caused by her assault is exacerbated by the prison’s refusal to acknowledge the sex of her perpetrator.”

Asked about the fairly modest number of transfers compared to the prison system’s total number of males who identify as female, the Women’s Liberation Front’s Adams said: “The state started last summer making transfers. They have slowed the rate, but the transfers haven’t stopped. They were forced by security and safety reasons to put the brakes on.”

“However,” the spokesperson said, “the department is committed to continuing its full implementation of SB 132 and providing a safe, humane, rehabilitative, and secure environment for all people in its custody.”

The website of the California Department of Corrections and Rehabilitation has a lengthy entry on “Frequently Asked Questions” that addresses aspects of SB 132 for prisons.

The FAQ page includes this question: “Will housing transgender women in a female institution put the safety of cisgender women at risk?”

Adams, the lawyer for the Women’s Liberation Front, rejected the state’s argument that a careful review process exists.

“If it is a good review process, I would hate to see a bad process,” Adams told The Daily Signal. “Beyond our general objections to housing women with biological men, we are hearing reports of incidents of sexual acts, both consensual and nonconsensual.”

The prison system’s FAQ entry also includes this question: “Is there a risk that cisgender men will falsely claim to be transgender women in order to be housed with women?”

The answer: “CDCR has the ability to deny a request based on management or security concerns.”