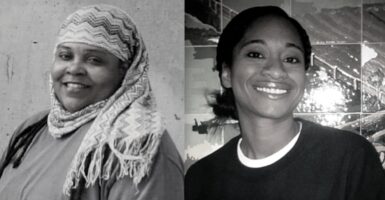 California’s prison system is endangering women by housing biological men in female prisons, according to a lawsuit filed Wednesday.

The California Department of Corrections and Rehabilitation is violating the First, Eighth, and 14th amendments through a new state law, the lawsuit says,  arguing that the law “cannot be applied in any manner that avoids violating the federal and state constitutional rights of the plaintiffs.”

According to the suit, plaintiff Krystal Gonzalez says she was sexually assaulted by a biological male transferred to Central California Women’s Facility under the law, known as the Transgender Respect, Agency, and Dignity Act, or SB 132. When Gonzalez filed a grievance and requested to be housed away from men, the suit says, the prison’s response referred to her alleged attacker as a “transgender woman with a penis.”

“Krystal does not believe that women have penises,” the lawsuit says, “and the psychological distress caused by her assault is exacerbated by the prison’s refusal to acknowledge the sex of her perpetrator.”

The Women’s Liberation Front, a feminist advocacy organization, filed the lawsuit Wednesday in U.S. District Court for the Eastern District of California against the California Department of Corrections and Rehabilitation, Corrections Secretary Kathleen Allison, and wardens Michael Pallares and Mona Houston.

Though several of the plaintiffs are referred to as unnamed “individuals,” the lawsuit specifies the nonprofit advocacy group Woman II Woman, which assists and advocates for incarcerated women affected by the new state law, and prisoners Gonzalez, Janine Chandler, Tomiekia Johnson, and Nadia Romero.

“California is home to the largest women’s prison in the world, where being degraded and humiliated is now part of the daily routine,” Woman II Woman founder Amie Ichikawa told The Daily Signal on Wednesday.

“This anti-woman law was overwhelmingly accepted by the California State Assembly members, embraced by our representatives and lauded by our senators,” Ichikawa said. “Sadly, this even includes the California Women’s Caucus. We do not understand how so many people, especially women, had the audacity to turn a blind eye to this abuse.”

“It’s a really positive step forward,” Wiener, a Democrat, said of SB 132 during an August town hall where he criticized legislation that would ban transgender surgeries for children.

“In California, we are moving the opposite direction, embracing our trans siblings, making it clear that trans people are fully part of this community, and that we love and honor them, and that we are gonna lift them up,” Wiener said.

Under the measure signed into law by Gov. Gavin Newsom, a Democrat, in September 2020, the California Department of Corrections and Rehabilitation must “house transgender, gender-nonconforming and intersex (TGI) individuals in a manner that matches their gender identity while supporting health and safety.”

The law requires the Department of Corrections and Rehabilitation to ask all individuals entering the department’s custody to state their personal pronouns, their gender identity, and whether they identify as transgender, nonbinary, or intersex.

The law also prevents the department from disciplining an individual for refusing to give this information, allows for the information to be updated later on, for staff to use the gender pronouns that the individual requested, and for the prison system to house the individual in a “correctional facility designated for men or women based on the individual’s preference.”

The lawsuit alleges that California is requiring prison housing placements to follow a “faith-based belief system” grounded in “acceptance of the unproven (and unprovable) assertion that human beings have no objective, immutable sex or that a person’s sex can be changed or made irrelevant by a person’s inner “identity.”

This faith-based belief system adopted by the government violates constitutional prohibitions against government establishment and promotion of religion, the lawsuit says, and forces incarcerated women to profess adherence to the state’s belief system.

“They’re trying to take this sort of faith-based system and tell us we have to believe it and we have to act like we believe it,” Women’s Liberation Front’s legal director, Lauren Adams, told The Daily Signal.

“You have people with beards who are calling themselves women, and we’re supposed to act like we think that’s true, too,” Adams said. “And they want to put that into civil rights law. It’s akin to someone saying that their religious beliefs require you to change your diet.”

Women represented in the lawsuit reportedly have experienced “fear, anxiety, depression, and/or post-traumatic stress disorder” as a direct result of housing, dining, showering, and recreating with biological men, the suit says.

Some of the incarcerated women are having sexual relations with biological males in the California Institution for Women and the Central California Women’s Facility, the lawsuit says, “creating a risk of pregnancy and the health and emotional complications from becoming pregnant while incarcerated.”

“Some incarcerated women sharing a cell with a man, along with other women, now make sleep schedules among the women so that a woman is on watch to try to prevent rape by the male cellmate,” the lawsuit says, adding that prison staff in women’s prisons now are “armed with new, stronger pepper spray and riot control measures in anticipation that men are stronger and more violent than women.”

Part of the California prison system’s attempts to respond to the presence of biological males in women’s prisons, the lawsuit says, involved women’s facilities temporarily giving condoms to incarcerated women along with materials about pregnancy and sexually transmitted diseases.

The Central California Women’s Facility, the suit says, “has considered cutting down the only shade trees in the exercise yard, which also attract birds that the women enjoy and appreciate, because incarcerated men might use the trees as weapons and/or because the trees cause visual blind spots.”

These blind spots “present security risks in a mixed-sex environment that are not present in a female-only environment,” according to the lawsuit, “and numerous women suffered psychological distress at the prospect of having the women’s only connection to nature stripped away because of the presence of male offenders.”

The lawsuit also claims that when incarcerated women file grievances asking the California Department of Corrections and Rehabilitation to stop transferring men into women’s facilities, the department alters the female inmates’ statements and changes their references from “men” to “transgender females.”

This process alters “the complaining inmate’s own words, perception, and substance of requested corrective action,” the lawsuit says.

As of Oct. 22, 41 individuals who said they identify as transgender have been approved for transfer to the institution matching their stated gender, California Department of Corrections and Rehabilitation Deputy Press Secretary Terry Thornton told The Daily Signal Wednesday.

Thornton said that a total of 276 biologically male prisoners had requested to be housed in female institutions as of Oct. 18. The California Department of Corrections and Rehabilitation denied seven of their requests, and 10 prisoners “changed their minds,” she said.

“The remaining requests are under review,” Thornton told The Daily Signal.

One biologically male prisoner who was transferred to a women’s prison through these policies is a twice-convicted baby killer who is now incarcerated in the same facility as the mother of his children, who he killed.

The Women’s Liberation Front’s lawsuit maintains that incarcerated women have a right to be “protected from known, elevated risks of the consequences of sex with men.” Women also have the right to be protected from being raped, sexually assaulted, or sexually harassed by men, the suit says.

The lawsuit argues that women have a right to privacy and dignity and should not be compelled to sleep, shower, or “otherwise be naked” in the presence of incarcerated men—“or be exposed to the naked bodies” of biological males.

Adams, the legal director at Women’s Liberation Front, told The Daily Signal that the law is “disproportionately impacting women” without “negatively impacting men at all.”

“There’s no changes to the men’s prison,” Adams said Wednesday. “There’s not a bunch of women opting in to go transfer. And if there were, it wouldn’t be placing men at higher risk of harm.”

The law also creates a whole “set of rights and privileges for people who claim transgender identity,” she said.

Although SB 132 requires prison guards to refer to transgender prisoners by their “preferred honorifics,” she said, there is no such rule for the biological females in California’s prisons.

“I can tell you that from what I’ve heard from the women in there, they’re not referred to by any honorifics by these guards,” Adams told The Daily Signal.

The Women’s Liberation Front legal director also said that although many prison guards are kind to prisoners, some refer to the women using names such as “bitch” or “cow.”

“It’s been demoralizing [for the female prisoners] seeing these men spoken to with respect in that way,” Adams said, adding that the prison guards fear that litigious transgender prisoners will file grievances.

The lawsuit is backed by a slew of supporting organizations, including Keep Prisons Single Sex, the Family Policy Alliance, Concerned Women for America, the U.S. chapter of the Women’s Human Rights Campaign, the Independent Women’s Law Center, and the California Family Council.

This story has been updated to include data from the California Department of Corrections and Rehabilitation.