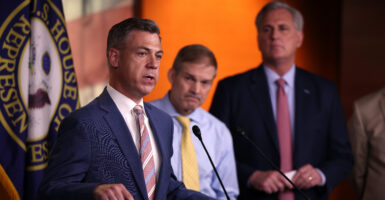 "The more we learn, the more we realize that there were serious security failures at the Capitol, and why doesn't this committee want to dig into that?" asks Rep. Jim Banks, R-Ind. Pictured: From left, Banks is joined by Rep. Jim Jordan, R-Ohio, and House Minority Leader Kevin McCarthy, R-Calif., during a July 21, 2021, press conference on House Speaker Nancy Pelosi’s decision to reject two of McCarthy’s appointees to the committee investigating the Capitol riot of Jan. 6, 2021. (Photo: Kevin Dietsch/Getty Images)

A bipartisan investigation of the Capitol riot would dig into the security breakdown and not ignore questions that didn’t conform to a Democrat Party narrative, said Rep. Jim Banks, whose appointment to a select committee was blocked by House Speaker Nancy Pelosi.

“If I were ranking member of the committee, we would be asking the tough questions that Pelosi doesn’t want the committee to ask, because she’s responsible but she hasn’t been held accountable for the security failures at the Capitol and [on] Jan. 6,” Banks, R-Ind., told The Daily Signal.

“The more we learn, the more we realize that there were serious security failures at the Capitol, and why doesn’t this committee want to dig into that?” Banks added later. “They don’t want to dig into it because it deviates from their political narrative.”

The House panel investigating the Jan. 6, 2021, riot at the Capitol scheduled a televised presentation in prime time Thursday night as the opener for what many Republicans consider to be a series of hearings designed to draw attention to Democrats’ version of what happened that day.

Pelosi then appointed Rep. Liz Cheney, R-Wyo., as vice chair of the panel along with Rep. Adam Kinzinger, R-Ill., to give the committee the patina of bipartisanship. However, both Cheney and Kinzinger have been harsh critics of former President Donald Trump, whom Democrats single out for blame in the Capitol riot.

Hundreds of people who had just attended a pro-Trump rally entered the Capitol that day after some participants assaulted U.S. Capitol Police officers and broke into the building. Inside,  a joint session of Congress was in the process of certifying the Electoral College vote sealing Joe Biden’s victory over Trump in the 2020 election.

Banks said the “breadcrumbs lead to Pelosi’s office,” because the California Democrat is responsible for overseeing security at the Capitol.

The conservative legal group Judicial Watch released records Tuesday, obtained through the Freedom of Information Act, including a U.S. Capitol Police memo that says of the day of the riot:  “Due to COVID-19 and other issues, the normal staffing for a joint session was less than half of what [Lt. Michael] Byrd usually has assigned to the House Chamber.”

“The head of the Capitol Police union told us they weren’t prepared for Jan. 6 because the intelligence wasn’t ever disseminated to Capitol Police officers,” Banks told The Daily Signal, adding:

They weren’t equipped. They had faulty and outdated equipment. And they weren’t trained, even [with] all the BLM [Black Lives Matter] riots in the summer 2020, didn’t train Capitol Police officers to deal with a riot.

And then yesterday, we found out kind of a bombshell. … Judicial Watch through FOIA discovered that the Capitol Police was only 50% staffed because of COVID on Jan. 6. So why was that? Those are serious questions, but they don’t want to ask them because it deviates from their political witch hunt narrative.

According to published reports, Rep. Jamie Raskin, D-Md., is among committee members who want to use the panel as a reason to push for the end of the Electoral College, while others want to push other changes to election procedures sought by Democrats well before the Capitol riot.

“It’s not about studying what happened on Jan. 6 so that something like that doesn’t happen again,” Banks said ahead of Thursday night’s prime-time hearing by the panel, officially called the House Select Committee on the January 6th Attack on the Capitol.

“It’s all about advancing their agenda and also all about payback to their political opponents,” Banks said. “So it’s shameful. The American people aren’t falling for it.”

Committee members have suggested the hearings will provide evidence that Trump is responsible for the riot.

However, Trump has said he authorized 10,000 National Guard troops to be deployed to the Capitol grounds before his Jan. 6 rally challenging the election results, which was held on the Ellipse, a park south of the White House.

Critics of Pelosi have said the House speaker refused the presence of troops.