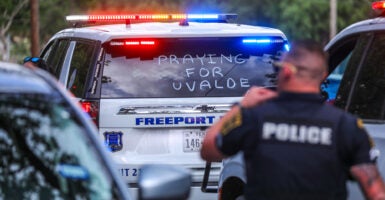 It's highly questionable whether red flag gun laws would have been able to prevent the May 24 mass shooting at Robb Elementary School in Uvalde, Texas, that left 19 young students and two teachers dead. Pictured is the June 1 funeral cortege for two of the victims. (Photo: Yasin Ozturk/Anadolu Agency/Getty Images)

Tragedies like those recently suffered in Buffalo, New York, and Uvalde, Texas, cause many Americans to voice an understandable—if misguided—urge for politicians to “just do something.”

Many of the laws for which they reflexively call—such as universal background checks and bans on so-called assault weapons—suffer from a host of constitutional and practical defects.

They wouldn’t have the impact on gun violence that advocates claim and aren’t likely to have stopped or hindered a single mass public shooting in the past two decades.

One policy that has increasingly found its way into the national conversation is that of so-called red flag laws, also known as extreme-risk protection orders.

While, theoretically, such laws could provide a valuable and constitutional tool to combat certain types of gun violence, none of the ones currently in existence at the state level adequately address the very real concerns that come with depriving people of a fundamental right.

The federal government’s limited forays into this space, such as the Justice Department’s model red flag bill, have also fallen abysmally short, and create additional constitutional and practical concerns.

The theory behind these laws has been to address a very serious concern with respect to mass public shooters. With perhaps one notable exception, every mass public shooter in recent history passed a background check and legally procured firearms, often despite showing very alarming signs of being a danger to self or others.

This is also often the case for those who kill themselves with a gun, the most common type of gun violence in the United States.

Perpetrators of mass public violence in particular pass background checks largely because federal law provides only a limited number of ways in which individuals lose their Second Amendment rights, most commonly by conviction of a felony or domestic violence misdemeanor, or by involuntary commitment to an inpatient mental health facility.

People who have their Second Amendment rights revoked in this manner face a real likelihood of never having them restored, and these are, therefore, severe measures requiring that very high legal thresholds be met.

Involuntary commitment, in particular, is often reserved for only the most serious of mental health crises.

There are, at least in theory, constitutional ways of temporarily restricting gun ownership for individuals who are clearly a danger to themselves or others, regardless of whether they suffer from a diagnosable mental illness or have yet to commit a disqualifying felony.

That said, the right to keep and bear arms is a fundamental constitutional right, and any deprivation of that right—even temporarily and for compelling reasons—requires the highest standards of due process.

The closest corollary to red flag laws is the civil mental health commitment process for individuals alleged to be mentally ill and dangerous.

While red flag laws raise additional concerns and aren’t perfectly analogous, the civil commitment process provides at least a starting point for bare minimum due process standards—the right to an attorney, to cross-examine witnesses, and to testify on one’s own behalf; the burden of the state to continually prove its case by clear and convincing evidence; ex parte or emergency orders limited only to serious threats of imminent harm; and principles limiting deprivations to the least restrictive means necessary.

Moreover, from the perspective of sound public policy, any red flag law should include comprehensive and detailed practical considerations, like specifying the methods for notifying defendants of the allegations and their rights, for storing seized firearms and returning them to their owners, for immediately remedying clear mistakes (such as cases of mistaken identity), and for promptly restoring a person’s Second Amendment rights after orders expire.

Just as importantly, any palatable law should be fully integrated with existing mental health, domestic violence, and addiction treatment infrastructures, and otherwise ensure that the process adequately addresses the underlying problems that led a person to be dangerous in the first place.

It should never be about simply disarming people, but about restoring them to a point where they are no longer dangerous.

These are very important aspects of the theory behind red flag laws. Unfortunately, more than four years after red flag laws came into the spotlight, it’s clear they aren’t necessarily a failure in theory, but they’ve been a failure in practice.

Of the more than 20 red flag laws already on the books, not even one adequately addresses all of the very real concerns that come with deprivations of a fundamental right.

Some states have admittedly done a better job addressing these concerns than others—for example, Colorado’s law is far less objectionable than New Mexico’s—but all of them come up short in key areas, such as authorizing the use of low burdens of proof or failing to provide any mechanism for ensuring those deemed dangerous receive help.

States have proven themselves either unable or unwilling to ensure that the reality of red flag laws pass constitutional muster.

Worse, as advocates push for these laws at a federal level, there are even greater concerns about the federal government’s role.

Both ideas suffer from serious theoretical and practical problems.

Any “true” federal red flag law—one that enables red flag petitions to be filed through the federal court system—would likely suffer from a serious constitutional flaw. The federal government, unlike state governments, lacks general “police powers” and cannot broadly regulate the public safety, except in those limited scenarios specified by the Constitution.

While courts have broadly construed the federal government’s ability to regulate “interstate commerce,” they have also drawn a line at comparable laws criminalizing gun possession on school grounds. This is part of the reason why similar restraining orders based on violent behavior are exclusively issued at a state level.

Additionally, there is no widely available mental health or addiction treatment framework at a federal level, nor is there a true federal equivalent of a local police force authorized to enforce federal red flag orders.

As for a federal bill that attaches federal funding to the adoption of state red flag laws, that raises its own concerns. It’s very unlikely that any set of minimal federal standards would compel states to provide either adequate due process protections or the sort of comprehensive, detailed approach necessary to avoid objection.

That’s especially true if the Justice Department’s recently issued “model red flag law” is any indication of where federal advocates stand on this issue. The model law contains numerous nonstarters, including allowing a defendant’s rights to be revoked at one-sided, ex parte hearings based on nothing more than “reasonable cause,” an incredibly low burden of proof when dealing with fundamental constitutional rights.

The federal government shouldn’t bribe states into adopting a bare-bones framework for red flag laws, especially when states thus far have a less-than-stellar track record of writing and implementing them on their own.

There is, frankly, no reason to believe that states desiring this federal funding would go through the rigorous process of fleshing out the federal minimum standards with sufficient safeguards.

Any red flag laws would have to be much better than they are in states that have already taken a swing at them. Since the federal government in all likelihood won’t improve upon laws passed at the state level and has other constitutional restraints on its ability to legislate in this area, it should pump the brakes on federal red flag legislation.

As we’ve explained elsewhere, Congress has other options it can pursue to help states deal with violence in schools, such as encouraging best practices on school security and ensuring cooperation between federal, state, and local agencies on behavioral threat assessment and related training. None of these options suffer from the same serious constitutional concerns as a federal red flag law.

It’s never worth “just doing something” when that something incentivizes states to do the wrong thing.