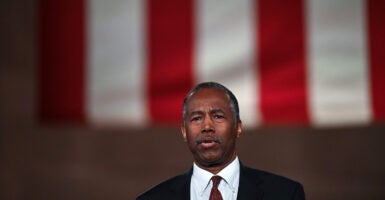 As a doctor, Ben Carson, who is also the former secretary of Housing and Urban Development, says it’s hard for him to understand how medical professionals can perform abortions knowing what we do about a baby in the womb. Pictured: Carson addresses the Republican National Convention from D.C, Aug. 26, 2020. (Photo: Nicholas Kamm/AFP/Getty Images)

A little bit of logic and brain power might go a long way in solving the controversy over abortion, Ben Carson says.

“I wish people would just take a step back from all this emotional rhetoric, and just use their brain, and look and see what is in that mother’s womb,” Carson, a renowned brain surgeon, said.

Through modern ultrasound technology, we know that a child in the womb is “a human being with a head, and a face, with eyes, a nose, and a mouth, and arms, and legs, and fingers, and a heart beating, and it can move, and it can react to the environment,” Carson said on “The Daily Signal Podcast.”

As a doctor, Carson, who is also the former secretary of Housing and Urban Development, says it’s hard for him to understand how medical professionals can perform abortions knowing what we do about a baby in the womb.

Abortion is “barbaric,” he said.

Abortions performed in the first trimester often use a thin tube to vacuum the baby out of the womb. This method is also called suction aspiration and “frequently the baby’s trying to move away from [the suction] before it tears off an arm or leg, and you see all the blood and stuff going down a tube,” Carson explained.

For abortions performed in the second trimester, 14 to 26 weeks, and third trimester, 29 to 40 weeks, the physician often uses forceps to reach in and forcibly pull the baby out of the uterus.

“We want to talk about ancient civilizations and how barbaric they are,” Carson said, but “how are we not worse than that? And I think in the future, people will look back on this time and they will just shake their heads and say, ‘How could those people be like that?’”

Carson’s remarks on abortion come about three weeks after a draft opinion of Dobbs v. Jackson Women’s Health Organization was leaked from the Supreme Court, sparking a national conversation over abortion. The draft opinion indicates that the high court is preparing to overturn the landmark 1973 abortion case Roe v. Wade.

The leak has led to a flurry of protests outside the Supreme Court and the homes of the more conservative Justices.