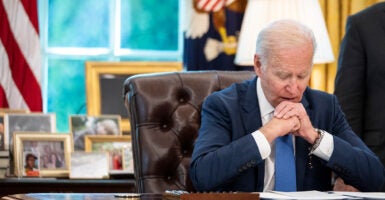 President Joe Biden, seen here in the White House in Washington, D.C., on May 9, is expected to shred former President Donald Trump’s Title 42 as soon as it expires on Monday. (Photo: Drew Angerer/Getty Images)

“The fact is that our borders are not open,” according to Customs and Border Protection Commissioner Chris Magnus.

You could have fooled me.

Notwithstanding this unfounded claim by a member of Team Biden, Border Patrol agents confronted 234,088 illegal aliens in April. This is yet another record shattered by an administration that smashes all the wrong records, like China at a Greek wedding.

Biden is expected to shred Trump’s Title 42 order as soon as it expires on Monday. Federal officials no longer will be able to use the COVID-19 emergency as a reason to deport illegal aliens nabbed on the southern frontier.

More than 40 suspected terrorists have been stopped, under Biden, trying to break into America. Rep. Jim Jordan, R-Ohio, wondered how many of them might be here now.

“Have any of the 42 illegal migrants on the terrorist watchlist or no-fly list encountered on our southwest border been released into the United States?” Jordan asked Homeland Security Secretary Alejandro Mayorkas at an April 28 House Judiciary Committee hearing. The eternally vigilant DHS chief replied: “I do not know the answer to your question.”

“Forty-two is 23 more terrorists than it took to perpetrate 9/11,” Ira Mehlman of the Federation for American Immigration Reform said. He added: “This is further confirmation that the Biden administration is compromising national security in pursuit of an open-borders policy that has no public support outside of ‘the squad’ and their merry band of adherents.”

We should all be a lot more worried about terrorists who are taking advantage of the self-inflicted chaos and are among the 700,000 ‘got-aways’ whom CBP estimates have entered without getting caught since Biden took office. We obviously have no way of knowing anything about the people CBP didn’t ‘encounter,’ but it is reasonable to assume that our enemies are aware of our vulnerabilities and that they are exploiting the situation. Unfortunately, we may have to wait until something goes ‘Boom!’ before we find out.

Beyond these suspected terrorists, who are so eager to come to America, others have been waived in via a program called Operation Allies Welcome. Most of them were granted entry after Biden’s shameful, deadly retreat from Afghanistan last August.

According to documents procured by Project Veritas, “Numerous violent refugees, previously flagged by DHS for a wide range of offenses the agency describes as terrorism, are living in the United States.”

—Nazir Ahmad Rahimi entered last Aug. 24, despite DHS’ warning that he “has engaged or is likely to engage in an unspecified violent terrorist act.” Last seen in Washington, D.C., Immigration and Customs Enforcement seemingly holds Rahimi but has yet to deport him.

—Ismael Jurat arrived Aug. 31. He soon joined the Terrorist Watchlist’s Category 15 for the “Armed and Dangerous” who “used Explosives/Arms.” Regardless, DHS gave him a work visa. Records show he resides in California.

—Anwarallhaq Wahidi came here, courtesy of Operation Allies Welcome. DHS declared him a Category 15 threat on Oct. 17. Ten days later, he scored a two-year work visa. Thanks to this administration, terrorists are receiving work visas and enjoying the USA. The imaginary U.S.-Mexico “border” has lured 23 suspected or confirmed terrorists, while 19 others were intercepted at official ports of entry.

Among an estimated 700,000 “got-aways” who penetrated America’s boundaries without permission and then burrowed within, how many are terrorists? Who the hell knows?

If Biden and the Democrats were any more relaxed about all of this, they would be comatose.