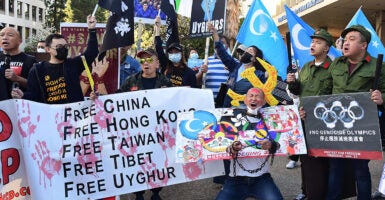 American citizen Wang Shujun posed as a human rights activist to spy on Chinese dissidents in the U.S. and pro-democracy leaders abroad, according to the Justice Department. Pictured: Activists protest the 2022 Beijing Winter Olympics on Feb. 3 outside the Consulate of China in Los Angeles. (Photo: Frederic Brown/Getty Images)

The Justice Department has charged a human rights activist in Queens with spying on Chinese dissidents.

Authorities charged Wang Shujun, 73, of Queens, New York, with “conspiracy and other charges related to an espionage and transnational repression scheme,” the Justice Department announced Wednesday. Prosecutors also charged four persons they said were Wang’s China-based Ministry of State Security handlers with the same crimes; however, these individuals remained at large, officials said.

“We allege Wang participated in a pro-democracy organization with the insidious intent to spy on those who joined,” Assistant Director-in-Charge Michael Driscoll said in the Justice Department’s announcement. “He targeted dissidents living in the United States, putting their lives at risk.”

Prosecutors said Wang founded the Hu Yaobang and Zhao Ziyang Memorial Foundation, a nonprofit dedicated to reform-minded leaders of the Chinese Communist Party, in Flushing, Queens. They said Wang used his status as a human rights activist to gather intelligence on Uyghurs, Tibetans, Taiwanese independence advocates, and Hong Kong pro-democracy activists for his four handlers in China, according to court filings.

Wang then allegedly shared intelligence on his targets with the handlers via encrypted applications, email “diaries,” and in-person meetings in China. At least one individual Wang allegedly spied on was arrested later by Chinese authorities.

Salih Hudayar, prime minister of the East Turkistan Government in Exile, told the Daily Caller News Foundation on Monday that he has been the target of an ongoing Chinese intelligence operation since 2018.

Hudayar said that when a Chinese spy who posed as a human rights volunteer failed to infiltrate his Uyghur group, the East Turkistan National Awakening Movement, the suspected agent filed baseless charges against him with the Metropolitan Police Department in an attempt to silence him.