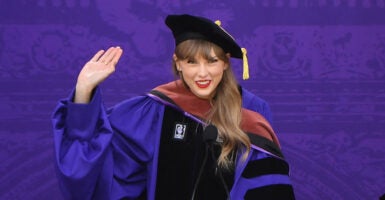 Don’t plan on hearing from a conservative speaker at your college commencement this spring.

This year, just three of the top 100 colleges ranked by U.S. News and World Report are hosting conservative commencement speakers, while 53 are hosting left-of-center lecturers, according to the Young America’s Foundation 2022 Commencement Speaker Survey.

The remaining colleges and universities are not tallied in the foundation’s study if they are hosting speakers without apparent political affiliations, hosting multiple speakers, opted for university personnel to give the address, or hadn’t announced their commencement speakers as of the conclusion of the survey.

The trend of political liberals dominating the list of graduation speakers has been ongoing for the past 30 years, according to the foundation.

For the class of 2022, the speeches are being given by the likes of comedian Ken Jeong and former NBA basketball star Dwyane Wade, with speeches focusing on topics such as anti-racism and social justice.

“Despite his sinking poll numbers and rising inflation, President Joe Biden himself is scheduled to speak at University of Delaware’s commencement—so long as he can remember to show up on time,” the Young America’s Foundation report says. Biden represented Delaware in the U.S. Senate for 36 years.

The foundation says the only three conservatives this year at commencement lecterns will be Virginia Gov. Glenn Youngkin, former NFL quarterback Tim Tebow, and Greek Prime Minister Kyriakos Mitsotakis. However, other leading conservatives, such as Florida Gov. Ron DeSantis; Sen. Ted Cruz, R-Texas; and South Dakota Gov. Kristi Noem were not expected to speak at any commencements this year, according to the foundation’s survey.

“Even as Americans are beginning to wake up and wholly reject the left’s disastrous economic policies and culture wars, America’s universities are working overtime to rehab the left’s failing image,” it concluded. “It’s truly sad that up until their very last day of school, students are being indoctrinated by speakers with a clear ideological agenda—people who have no intent on giving an actual inspiring, powerful send-off to our future leaders.”