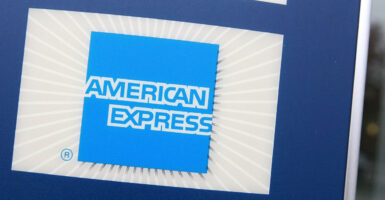 “You are reinforcing this culture that is tearing apart your company, harming your profits, and harming the future of America,” Kenny Xu, head of the advocacy group Color Us United, tells American Express. (Photo: Justin Sullivan/Getty Images)

Internal documents appear to tell a different story than public statements by American Express denying that the credit card giant has implemented “divisive woke policies” that punish white employees, according to a group that advocates a race-blind America.

Color Us United, a nonprofit founded two years ago, joined with allied organizations to expose internal American Express initiatives that are “possibly unconstitutional and illegal,” in the words of the coalition’s website, Un-American Express.

Color Us United, which says it works to “resist those who divide Americans in the name of racial equity in government, schools, corporations, journalism or social media,” has highlighted American Express’ media statements on its promotion, hiring, and compensation policies and then juxtaposed those statements with internal documents.

The multinational credit card company, headquartered in New York City, eventually responded to multiple inquiries from The Daily Signal, which sought comments in response to Color Us United and other critics who say American Express has embraced discriminatory personnel practices while vilifying America’s free market system.

Andrew Johnson, vice president of corporate affairs and communications for American Express, replied in a May 9 email with a statement quite similar to the one that the company issued to Fox News Digital taking issue with an ad campaign that declares AmEx has “gone woke.”

Fox’s April 13 article, published two weeks after The Daily Signal first reported on the Color Us United campaign, included American Express’ statement that the ad “and other related allegations make sensational claims” about the credit card company that “aren’t true.”

American Express remains committed to “fostering a diverse and inclusive culture where all colleagues can thrive,” according to the statement.

The commercial is the work of Consumers’ Research, a nonprofit founded in 1929 devoted to increasing consumer knowledge of corporate policies and products.

The narrator of the ad tells listeners that American Express employees “are promoted and told to offer lower premiums based on race.” The narrator adds that the credit card company has “administered critical race theory training” while informing employees that “capitalism is racist.”

Consumers’ Research partnered with Color Us United and another watchdog group, the New Tolerance Campaign, to challenge these internal American Express policies and encourage state pension boards to divest from the company until it revokes “woke policies.”

The Un-American Express website tells taxpayers that they are financing “wokeness run wild” at American Express through mutual funds, index funds, and direct investments made by state pension boards. The campaign also encourages shareholders to take action against internal AmEx policies that are discriminatory and out of step with longstanding American principles.

Kenny Xu, president of Color Us United, has called on American Express to state publicly that it will not retaliate against employees who speak out against or dissent from race-conscious policies.

“What we would say to American Express is that if you really claim to respect all your employees, as you did in that Fox News article, and if you truly care about all your employees, then why don’t you make a statement saying this?” Xu told The Daily Signal during an interview on Zoom, adding:

Make it clear that you will not fire or in any way harm employees who express concern about your employment policies.  …

Because all these employees really are trying to do is help you  be a better company, help you be a more respectful company, a more tolerant company, truly tolerant company. And yet, you are reinforcing this culture that is tearing apart your company, harming your profits, and harming the future of America.

The Daily Signal also asked American Express whether it is willing to release such a statement. But Johnson, the company vice president, did not respond to this question.

Color Us United organized a petition drive that asks signatories to tell AmEx CEO Steve Squeri “to stop dividing his workforce on lines of race, gender, or sexuality.” Xu’s group set a goal of 10,000 signatures, and has collected more than 8,000 so far.

The petition lists several examples of what Color Us United identifies as “egregious policies” through which American Express:

—Ties executive bonuses to racial “equity,” incentivizing managers to hire minorities even when they are less qualified than other job candidates.

—Provides training in critical race theory, teaching staff that “capitalism is racist” and asking workers to rank themselves on a hierarchy of “privilege.”

Xu is a former intern at The Heritage Foundation, parent organization of The Daily Signal, where he has contributed commentary.

In the interview, Xu said American Express submitted “false” statements in response to allegations by his organization.

For example, the Color Us United leader points to a portion of American Express’ statement that says: “Advancement, hiring, and compensation within our company is based solely on individual qualifications, business, and leadership performance. … and we do not provide any incentive for behaviors that discriminate against or favor any group of employees.”

But an AmEx filing with the U.S. Securities and Exchange Commission shows the company tying 15% of executive bonuses to a “diversity” measurement, which Xu said provides managers with an “incentive to fire white employees and hire employees of color or women.”

Xu said Color Us United has asked American Express “to rescind their anti-white, 15% bonus policy for hiring minorities and women, which is antithetical to the principle of hiring and promoting on the basis of merit only.”

In his written statement to The Daily Signal, Johnson didn’t say whether American Express would comply with this request.

The Un-AmericanExpress website provides links to the internal documents posted by Color Us United in response to American Express’ statements.

Xu highlights one example that concerns the company’s contention that it “never taught” employees that “capitalism is racist.” But Color Us United provided a transcript of a June 17, 2021, conversation between Trisha Rose, a Brown University professor, and Glenda McNeal, American Express’ head of strategic partnerships.

In the transcript, Rose says: “Slavery was an immense economic engine, a globally powerful economic engine that in fact is at the heart of the emergence of capitalism. So, what we know as the modern world on the capital market system begins with slavery in major ways.”

Color Us United also posted a document describing how Khalil Muhammad, great-grandson of early Nation of Islam leader Elijah Muhammad, lectured American Express employees about the “systemic evils” of capitalism during a streaming session on Sept. 24, 2020.

About a month later, American Express first announced a $1 billion “action plan” to promote “racial, ethnic, and gender equity for colleagues, customers and communities” in a press release dated Oct. 29, 2020.

“It should be clear by now that the actions of American Express [in] looking at their employees primarily, and in many cases, exclusively through a lens of race are likely illegal, likely unconstitutional, but most definitely antithetical to American values,” Gregory Angelo, president of the New Tolerance Campaign, told reporters during a virtual press conference April 19. “That’s why we have this campaign to attempt to rebrand American Express.”

Here is the full text of American Express’ emailed statement to The Daily Signal:

The recent allegations make sensational claims about our company that simply aren’t true. American Express has a longstanding commitment to living our company values, which include fostering a diverse and inclusive culture where all colleagues can thrive. Advancement, hiring, and compensation within our company is based solely on individual qualifications, business, and leadership performance.

Any claim to the contrary is wrong, and we do not provide any incentive for behaviors that discriminate against or favor any group of employees. Our diversity and inclusion programs are not based on any specific theory or philosophy, and we have never taught our colleagues that capitalism is racist. We price our products without regard to demographic information, including race and ethnicity, as legally required.

We remain committed to upholding our values and ensuring that colleagues of all backgrounds and perspectives are respected, valued, and welcomed at American Express.