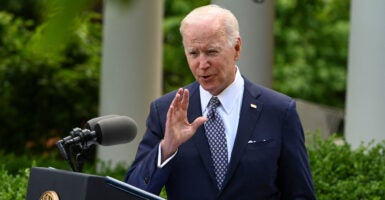 The Senate is considering yet another corporate bailout disguised as COVID-19 relief. Roughly 96% of the $48 billion in the bill would go to the Restaurant Revitalization Fund, a 160% increase above previous funding.

The program was created by President Joe Biden’s American Rescue Plan Act to redistribute wealth from American families to cherry-picked companies. While that’s reason enough for concern, the following are eight other glaring problems with this bill:

1) Subsidies to Businesses No Longer Struggling

Despite being legislated in the middle of 2022, the bill would provide subsidies to offset business revenue losses that occurred in 2020.

The supporters of the bill would have you believe that it’s aimed at businesses struggling today.

Clearly, without the use of a time machine (funds for which are not included in this bill), that cannot be the case.

Nowhere in the bill are any of these subsidies related to the current revenue levels of these businesses.

This bill would simply take money from Americans struggling with inflation today and give it to businesses that successfully struggled through the worst of the COVID-19 lockdowns and now Biden’s harmful economic policies.

2) Subsidies Regardless of Revenue Reduction

For example, the bill doesn’t care if a company had an established trend of declining revenues prior to 2019. Further, 80% of the bill’s subsidies can be triggered with just one dollar of loss.

Those $40 billion in subsidies will match, dollar for dollar, the difference in the 2020 and 2019 revenue levels of all covered companies, not just companies that had major revenue reductions.

Through a sleight of hand, the subsidies would be both free money and a tax shelter—making them, dollar for dollar, significantly more valuable than revenue from actual customers.

Normally, when a company generates a dollar in revenue and spends it on costs of doing business, it gets a tax deduction.

That deduction is a formal way of telling the IRS that you didn’t get to keep the dollar of revenue as profit, that you had to use it to cover payroll or other legitimate expenses, so you don’t get taxed on it.

Similarly, income that is excluded from taxation doesn’t need to be covered by a deduction since it is already not taxed.

Businesses favored by this bill get the best of both worlds. The subsidies both are excluded from taxable income and can be used to generate a tax deduction.

So, since the subsidies are already not taxed, the deduction claimed for spending them would naturally be used to cover other revenue.

These deductions will serve as tax shelters shielding profits from taxation for subsidized companies. That’s not exactly the grants to struggling businesses that the bill supporters purport to offer.

The bill extends and creates several periods during which recipients of the bill’s subsidies can spend the funds. Those periods extend from the start of the pandemic in early 2020 into March of next year and beyond.

The bill gives the federal government the ability to set the end of those periods out to a full two years after the bill is enacted.

Despite the subsidies being nominally tied to 2020, companies will have until mid-2024 to spend them—a minimum of a 1,460-day period to use the so-called emergency supports.

Even before the pandemic, the federal budget was on an unsustainable path. The excessive government spending hurts our economy by diverting people’s money at the whims of politicians and bureaucrats.

Our fiscal situation was worsened even further by Congress injecting trillions of new government spending into the economy, driving up the national debt by nearly $7 trillion in the past two years alone.

Congressional fiscal rules are meant to stop the government from continuously reaching into our wallets. The frequent bypassing of those rules has placed us in the economic situation we’re in; namely,  more than $30 trillion in debt (more than $230,000 per household) with the Fed’s printing presses sending us to 40-year-high levels of inflation.

The fiscal rules would require spending in this bill to either be offset or for events that are “unforeseen, unpredictable, and unanticipated.” Subsidies given out more than two years after the start of the pandemic and that will be available for two more years are none of those things.

Neither is this bill offset in any substantive way.

So, instead of respecting the rules and taxpayers, the bill waives those rules by designating itself as carrying “emergency spending.”

Though the bill calls itself an “emergency,” it cannot so easily mitigate the harm it will inflict on our economy. It represents a further expansion of government that will drive inflation and redirect more of what hardworking Americans produce, and will push us closer to a fiscal crisis.

6) Billions in Prior COVID-19 Funds Unspent

Out of $6 trillion of federal spending for the pandemic, hundreds of billions of those dollars still haven’t been spent. The government’s official COVID-19 spending tracker at USASpending estimates roughly $370 billion still hasn’t been spent.

Those funds were taken out of the hands of American families and the economy at a terrible time. Adding $48 billion more would only increase the harm done by a bloated federal government.

7) Our Economy Needs Workers, Not Bailouts

The record level of job openings demonstrates the strength and desire of American entrepreneurs to climb out of the pandemic.

This bailout bill will do nothing to undo the subsidies that have paid people more to stay home than to go to work or the regulations that have tied the hands of entrepreneurs.

Businesses don’t need subsidies that are two years late. They need the government to get out of the way and stop being a barrier to prosperity.

8) Price Will Be Felt in Inflation, Scarcity

Whenever the government spends, it spends your money. Whether the government gets that money through direct taxation, borrowing by promising future taxes, or printing it, the very real consequences are felt by every American.

If the bill becomes law, it will mean that either the Fed has to print more money, or the federal government has to crowd out more private investment.

In the former, the newly printed dollars will contribute to inflation by draining the value from bank accounts and paychecks across our country. In the latter, the government would starve the engines of our economy, causing more scarcity, driving prices higher, and keeping store shelves emptier longer.

Though the companies favored by this bill will enjoy the bailout and perks, the bill neither addresses an urgent issue nor sets us on the path back to prosperity.

Instead, the cost of the bill will be to double down on the disastrous economic policies that now loom over every American household.