Florida to Teach Students About Evils of Communism. Some on the Left Aren’t Happy About It. 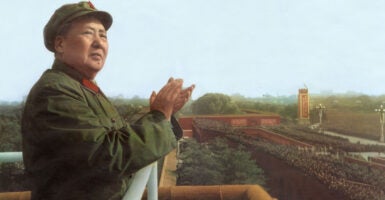 Then-communist Chinese dictator Mao Zedong reviews the army of the Great Proletarian Cultural Revolution in Beijing, then known as Peking, on Nov. 3, 1967. Students in Florida will be taught about Mao and other communist tyrants on Nov. 7, "Victims of Communism Day." (Photo: Apic/Getty Images)

Florida students will now learn about the evils of communist totalitarianism, thanks to the Florida Legislature and Gov. Ron DeSantis.

DeSantis signed HB 395 into law on Monday, creating a “Victims of Communism Day” in which middle school students will receive at least 45 minutes of instruction every Nov. 7 on topics “such as Mao Zedong and the Cultural Revolution, [Josef] Stalin and the Soviet system, Fidel Castro and the Cuban Revolution, Vladimir Lenin and the Russian Revolution, Pol Pot and the Khmer Rouge, and Nicolas Maduro and the Chavismo movement.”

Given the fact that the struggle against communism was the primary focus of American society and foreign policy for generations and that communism still threatens us today, isn’t it appropriate that high school students learn something about it?

Not according to some on the modern left.

University of Virginia political scientist Larry Sabato told me on Twitter that Florida’s initiative is just “political posturing.” Teaching high school students about the murderous regimes of Stalin, Mao, Castro, and other communists is “red baiting,” according to some in the media.

If that’s “red baiting,” then what would you call teaching students about Nazi atrocities and the Holocaust? Surely, young Americans should know about that.

A Miami Herald columnist, Fabiola Santiago, who is from Cuba, ranted that teaching a lesson about communism to students is itself just like communism.

Interestingly, we didn’t get those same comparisons when California mandated a full semester on ethnic studies for students to graduate high school. Some of the people and groups who spearheaded that initiative and shaped the model curriculum were Marxists.

Is it so ridiculous to set aside a single day each year—in a state with many refugees from communism—to talk about an ideology that has done so much harm in the world and has threatened to overthrow free societies around the globe?

Yes, according to Jezebel, which actually went with the line that “true” communism hasn’t been tried yet.

“For any impressionable Florida kids that may be reading this, please note that there have never been any ‘true’ communist countries, owing largely to violent intervention from the U.S. and other Western superpowers,” wrote Jezebel’s Kylie Cheung.

It would have all worked if not for that pesky United States!

Cheung also mocked the contention that communism has killed 100 million people. That’s some kind of right-wing fantasy pulled out of thin air, apparently.

To the contrary, historian David Satter wrote in The Wall Street Journal that communist regimes have killed on an “industrial scale.”

The numbers are staggering.

“In total, no fewer than 20 million Soviet citizens were put to death by the regime or died as a direct result of its repressive policies,” Satter wrote. “This does not include the millions who died in the wars, epidemics, and famines that were predictable consequences of Bolshevik policies, if not directly caused by them.”

When you count the victims not just of the Soviet Union, but of the various communist regimes it was linked to, “including those in Eastern Europe, China, Cuba, North Korea, Vietnam, and Cambodia,” Satter calculated, the number is about 100 million.

Even apart from communism’s lethality is the destructive nature of communism on the living. The ideology destroys economies, strips citizens of basic rights, saps them of their spirit, deprives them of religion and faith, and reduces them to slavery in the name of equality.

Just days after DeSantis signed the Florida legislation, Roman Catholic Cardinal Joseph Zen, a 90-year-old retired archbishop, was arrested by Chinese authorities for his support of democracy in Hong Kong.

The evil of communism is still very much with us.

Unfortunately, young Americans are woefully uninformed about communism and the Cold War. According to a poll conducted in 2016, about one-third of millennials thought that more people were killed under George W. Bush than under Stalin.

One of the foundational reasons for publicly funded education in America is to cultivate self-governing citizens of a republic. Giving American students a basic understanding of the differences between a free society, like ours, and totalitarian societies is essential.

How can they even understand our own country’s flaws if they have nothing to compare them against or to contextualize them?

Students should learn about the history of slavery and racism in America. What the left-wing education establishment increasingly wants is to mandate teaching about those things to the exclusion of anything else.

Even more, it wants to inject lessons in history and even science and math with warped ideology—such as critical race theory—that actually make us more racist and less free.

Its initiatives create an extremely distorted picture of the United States.

Throughout its history, America has been a symbol of liberty. In the 20th century, after a remarkable rise in power, it played an active role in opposition to totalitarianism on behalf of free people.

First was the fight in World War II against Nazi Germany and Imperial Japan—the triumph of which would have created a new dark age.

Next was the long, twilight struggle—as liberal President John F. Kennedy called it—against the Soviet Union and international Marxism. The goal of the Soviet Union, stated very plainly, was to bury the United States and free societies, to push Western civilization onto the ash heap of history.

History, the communists claimed, was on their side. To make sure of that, they imprisoned political dissenters en masse, starved their own people, directly killed millions more, and waged war on those who resisted around the world.

For a time, the United States was the only serious earthly counter to that threat. It was a symbol of hope for people living under the jackboot of fascism and communism.

Countless people abroad who live under the most direct threat of oppression understand what we stand for, at the most fundamental level.

Our own people should know that, too. Learning about communist tyranny and atrocities is a good place to start.