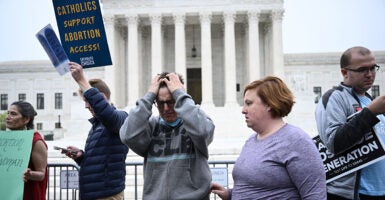 Pro-abortion groups were as vocal as ever following reports suggesting that Roe v. Wade is likely to be overturned in the near future, according to a leaked Supreme Court document. Pictured: Jessica Golibart cries as demonstrators gather in front of the high court on Tuesday. (Photo: Brendan Smialowski/AFP/Getty Images)

It’s been nearly a full day since Politico published a bombshell report indicating the Supreme Court could strike down Roe v. Wade, the 1973 decision legalizing abortion nationwide. Pro-abortion advocates continued to cluster outside the court to protest and give speeches denouncing the prospective ruling, which would be handed down late next month. Also present was a contingent of pro-life activists, trying to spread their message alongside a much larger, often hostile group.

The Daily Signal hit the streets to talk with the activists gathered in front of the court and see just what they’re thinking. Watch below: