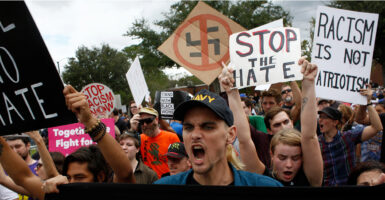 Debate over what types of speech should be allowed on college campuses has become highly contentious, most recently at Saint Vincent College in Latrobe, Pennsylvania. Pictured: Demonstrators gather Oct. 19, 2017, at the site of a planned speech by a white nationalist on the University of Florida's Gainesville campus. (Photo: Blanco/Getty Images)

Saint Vincent College in Latrobe, Pennsylvania, has given us yet another disturbing example of modern American colleges’ disdain for free speech.

David Azerrad, a professor at Hillsdale College’s D.C. campus, gave a lecture at Saint Vincent on April 8, “Black Privilege and Racial Hysteria in Contemporary America,” and the speech rubbed Gary Quinlivan the wrong way. Quinlivan is co-director of the program series at the private Catholic college about 40 miles southeast of Pittsburgh, where Azerrad spoke.

In a letter addressed to the school’s students and faculty, Quinlivan accused Azerrad of “minimizing the role of several highly accomplished African Americans” and that “his theory as to why Kamala Harris was selected as VP on the basis of her standing solely as an African American woman [was] demeaning in many ways.”

Quinlivan added that “the speaker’s presentation was not consistent with the Benedictine values of hospitality and respect for all people.”

“We regret that it was presented at this forum,” he said.

“If you listen to the talk, you can see, without really offering any substantive counterarguments, they’re just indignant that someone deviated from the accepted script when talking about race,” said Azerrad in an interview with The Daily Signal. “They just released a statement slandering me by suggesting that what I said was racist. In fact, what I said was a denunciation of racism.”

But the Rev. Paul Taylor, the president of Saint Vincent, agreed with his colleague and made a stunning announcement.

In another open letter on April 19, released five days after Quinlivan’s, Taylor said that as a result of campus grumblings over Azerrad’s presentation, he and what he calls his “Cabinet members” would “now approve all sponsored speakers to make sure that the message to be delivered is not in conflict with the spirit and Mission of the College.”

Yet, seemingly oblivious to the irony, Taylor wrote that the action the school was taking was intended to “protect the diversity of opinion critical to our students’ educational growth.”

Though disappointed in how Saint Vincent responded to his presentation, Azerrad says he’s not shocked.

“It’s, regrettably, a rather common story,” Azerrad said. “Namely, a speaker on a college campus says something perfectly sensible on the question of race … . A handful of students disagree loudly. After the talk is over, they complain to the administration, and the university administration cowers before their indignation.”

Where the incident at Saint Vincent differs from many other cases like it is in the extreme response of the school’s administration. Cowering before the mob is one thing; active suppression of freedom of expression on campus to placate the mob is quite another.

To Azerrad, the action taken by Saint Vincent’s administration represents a huge problem—and is a disservice to the college’s mission.

“A university is not a ‘safe space’ for ideas. It’s a place where ideas collide, where people express ideas so long as they do it peacefully and calmly, respectfully, which I did,” he said. “The university is overreacting by instituting this draconian policy to preapprove any speakers on campus.”

He added, “I suspect that the net effect of it will be to the detriment of Saint Vincent’s students, who will be exposed to a narrower range of ideas. You don’t go to college to have your prejudices confirmed.”

Azerrad is right about that. While people outside of academia might be rightly frustrated with the rampant censorship on campus, it’s the students who suffer the most.

There are many students on campus who want to be exposed to new ideas, to broaden their horizons and hear opinions they might not ever have considered. Instead, they’re subjected to the whims of radical activists and cowardly administrators who won’t stand up to them—or even agree with them.

Azerrad noted that “the students [who attended the talk] did not interrupt.”

They asked a lot of questions. Given the contentious nature of the subject these days in America, I think, on the whole, they behaved rather well.

There’s an appetite for debate on college campuses, but it’s being actively stifled by leftist dogma that views dissenting ideas as a threat to be eliminated.

Normally, the advice to students engaged in free speech is to ignore the radicals and press on with pursuing the truth. But the fact that Saint Vincent’s administration will now be actively complicit in efforts to stifle speech complicates matters.

The complicity of the school administration makes it a target, however. Students and donors alike should demand change at the school and the reversal of the new speaker-approval policy. If it doesn’t, Saint Vincent should be made to suffer financial consequences.

After all, why should donors be expected to subsidize an increasingly illiberal school? Why should students sit idly by as their First Amendment rights are trampled on?

The school’s 19th-century founder, Archabbot Boniface Wimmer, had some advice for students now fighting back against the tyranny at the college.

Forward, always forward, everywhere forward! We must not be held back by debts, bad years, or by difficulties of the times. Man’s adversity is God’s opportunity.

So, take heart, Saint Vincent students. At least your school’s founder is behind you.