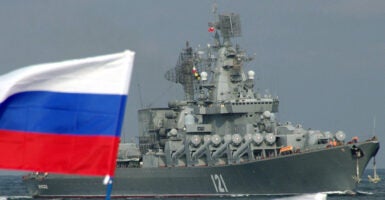 On April 13, the Moskva, the flagship of Russia’s Black Sea Fleet, was sunk by two Ukrainian Neptune anti-ship missiles. Pictured: The Moskva, as seen in 2008. (Photo: Vasily Batanov/AFP/Getty Images)

Once news broke that Ukraine had sunk the flagship of Russia’s Black Sea Fleet, the Moskva, naval analysts leapt into action. The event presents a crucial question to many observers, including the U.S. Navy: How was a well-defended and large warship sunk by two rather small anti-ship cruise missiles?

Based on what is publicly known, it came down to a combination of good Ukrainian tactics and poor Russian naval design resulting in the ship’s loss.

Apparently, during stormy weather (which may have diminished the ability of the ship’s sensors) on the evening of April 13, Ukraine launched two indigenously manufactured Neptune anti-ship missiles that struck the Moskva, resulting in its sinking the following day. From video released by Russia, it’s possible there was a significant loss of life—of a crew of 500, only 120 were present at a ceremony days after the sinking.

Subsequently, the U.S. Department of Defense reported Russian naval forces had moved further from Ukraine’s coastline. However, since Russia has a mix of 20 cruise missile armed warships, amphibious landing ships, and minesweepers still operating in the area, the threat is not yet gone.

Unconfirmed reports indicate that the attack succeeded because Ukraine had used a drone to distract the Moskva’s air defenses. Built in1979, the Soviet-era warship was outfitted with an array of defenses and sensors, but its more capable air search radar critical in defending from this type of attack can only cover so much airspace. In all likelihood, the Moskva’s crew was tracking the drone as the Neptune missiles hit from its blind side. Yet even after such a strike, such a large ship and crew should have been able to save it.

It is clear from photos before the Moskva sank that it suffered extensive fire damage with missile strikes near weapons stored above deck. The secondary explosions of those weapons resulted in the crew abandoning the ship rather than attempting to save it. This is important, Soviet planners designed the Moskva to be able to launch its weapons in a saturation attack against U.S. aircraft carriers—ship survival was not a top concern.

The incident gives us several key insights about our own navy, including some details we can glean regarding our naval adversary China.

The U.S. and Chinese navies design their warships similarly: with weapons mostly below decks, an approach that enables more effective damage control. Effective damage control depends on the crew fighting onboard fires and stopping flooding. However, little is known about Russian and Chinese damage control competencies. For the U.S. Navy, some recent incidents involving severe damage to its warships where the ship ultimately survived indicates a high degree of competency—look, for example, at the U.S. submarine Connecticut’s collision with an uncharted undersea mountain.

Lack of 360-degree defenses proved pivotal in the loss of the older Moskva. In 2016, the U.S. destroyer Mason defended itself and two other warships from cruise missile attacks in the Red Sea from Houthi rebels. Key was the Mason’s Aegis radar system, which provides 360-degree coverage and layered long-range and point defenses—a design modern Chinese destroyers are adopting. Unlike the U.S. Navy, there are no incidents or attempted attacks on Chinese warships with which to assess their performance.

That said, experience fighting at sea is irreplaceable and has deeply informed the specifications on which the U.S. Navy builds its ships—often at a premium cost. The so-called military specification or “mil-spec” is often derived from lessons bought in blood from World War II, the tanker wars of the 1980s, and even recent collisions in 2017 by destroyers McCain and Fitzgerald.

Added mil-spec costs include things like redundancy in critical systems, added watertight compartments to mitigate flooding, and ample firefighting apparatus throughout the ship.

While the Moskva’s sinking is a testament to the ingenuity of the Ukrainian armed forces, it also serves as a reminder of the perils at sea and the cost of failing to make the investments needed to be a competent and potent naval force.

Sadly, based on the administration’s latest budget proposal, which retires many more ships than it is commissioning, the Biden administration appears dead set on a course that will erode our navy’s ability to deter a foe like China.