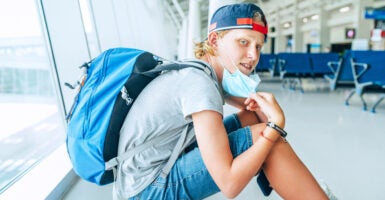 Travelers and flight attendants alike have eagerly parted with their masks, ignoring the advice of so-called experts. (Photo: Getty Images)

Asked whether he would heed calls from a growing number of congressional Democrats to continue turning away migrants at the border due to concerns about COVID-19, President Joe Biden told reporters, “There’s going to be an appeal by the Justice Department.”

The president later cleaned up his own mess, clarifying that the Justice Department will appeal a federal judge’s decision to strike down the Centers for Disease Control and Prevention’s mandate that Americans wear masks on airplanes.

But he’s sticking with his decision to scrap the so-called Title 42 policy. Beginning May 23, maskless noncitizens will no longer be swiftly deported.

Glad he cleared that up.

You can’t blame the president for being confused. His public health advisers seem pretty confused themselves. They’ve convinced him that migrants pose no public health threat but that Americans who travel in anything from Ubers to commercial jetliners do. He will end swift deportations for those who enter the country unlawfully but impose civil and criminal penalties on airline passengers who don’t wear masks.

The administration also is sending confusing signals on vaccines. The Food and Drug Administration has authorized a fourth COVID-19 vaccine dose for people over 50, but the CDC’s vaccine advisory committee didn’t endorse four shots.

And the confusion isn’t confined to Washington. The city of Philadelphia revived its indoor mask mandate on April 18 and rescinded it three days later. On April 22, the Board of Health “retired the system of COVID-19 response levels”—the methodology that had prompted the mandate’s revival.

The CDC, however, isn’t giving up on mask mandates, despite their questionable value.

Its flawed studies of masks and mask mandates included one in February that inspired the agency to produce a poster. It claimed that cloth masks reduced the odds of testing positive for COVID-19 by 56%, surgical masks by 66%, and N95/KN95 by 83%. There’s just one problem: The CDC discloses in a footnote that the results were “not statistically significant,” rendering the study’s findings worthless.

Federal District Court Judge Kathryn Kimball Mizelle, on April 18, vacated the CDC order that required people to wear masks on planes and in airports. Mizelle held that the CDC did not have the authority to impose the mandate under the Public Health Service Act.

That statute authorizes the agency to perform “such inspection, fumigation, disinfection, sanitation, pest extermination, destruction of animals or articles found to be so infected or contaminated as to be sources of dangerous infection to human beings, and other measures.”

The CDC seized on the word “sanitation,” tucked between “disinfection” and “pest extermination.” Administration lawyers argued that requiring people to wear masks on airplanes was a form of sanitation. Mizelle tossed aside that dubious claim.

She also held that the CDC violated the Administrative Procedure Act, which requires federal agencies to notify the public of their intentions and seek their comments before implementing major regulations. The CDC ignored that requirement.

You can’t blame the CDC for not wanting to hear from the public. Within 24 hours of the court ruling, my wife and I were waiting for our flight home at the Denver airport. Only about 1 in 10 people were wearing masks in the terminal.

As we boarded, our unmasked flight attendant greeted passengers, nearly all of whom were maskless, saying, “It’s so nice to see people’s faces again!”

I’m not sure she meant that sincerely in my case, but you get the idea. Travelers and flight attendants alike eagerly parted with their masks, ignoring the advice of public health experts.

Many federal, state, and local officials seem to be clinging more desperately to their emergency powers even as their credibility erodes. Those powers may have been appropriate in the early days of the pandemic when patients were showing up in emergency departments in respiratory distress caused by a novel pathogen that doctors hadn’t encountered.

Today, the coronavirus is no longer novel. More than 219 million people are fully vaccinated, nearly 100 million are boosted, and the CDC estimates that 140 million have acquired immunity naturally. Newly authorized oral antivirals significantly reduce the risk of severe illness from COVID-19.

Instead of sticking with the 2020 playbook, government officials should adapt their strategies to the changing nature of the public health challenge. They should focus on keeping an adequate supply of antivirals and encouraging pharmaceutical companies to develop new vaccines to protect against future variants.

Instead of issuing edicts, they should provide accurate information that people can use to make informed judgments for themselves. The CDC should remember that it exists to serve the public, not rule over them.

Biden, perhaps accidentally, took this approach within hours of Mizelle’s ruling against the CDC mask mandate.

Asked whether people should still wear masks on airplanes, Biden replied, “That’s up to them.”