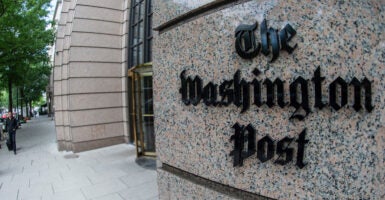 It turns out that The Washington Post embraced some forms of “cancel culture” at least as far back as 1945.

In one case, the Post supported a college that was closing a student newspaper for publishing what the newspaper characterized as a “highly explosive” piece in support of racial integration.

The Post also warned in the 1945 editorial that the First Amendment is “a freedom permitted very few journalists.”

These are some of the details in historian and political commentator Craig Shirley’s book “April 1945: The Hinge of History,” which details the end of World War II. The book also highlights what was happening in the United States as the war wound down.

Included in Shirley’s book are anecdotes about the Post as what the author calls a “southern Jim Crow newspaper,” a newspaper he describes as backing segregationist Democrat politicians.

“The Washington Post has a long and time-honored history in racism,” Shirley told The Daily Signal.

Shirley added that it’s “unbelievable irony” that the Post in recent years frequently charges political opponents with bigotry and racism.

In 2020, the Post settled a multimillion-dollar libel lawsuit by Kentucky teenager Nicholas Sandmann, whom the newspaper falsely had accused of racism.

The Washington Post’s public relations office didn’t respond to The Daily Signal’s request for comment for this report.

In his book, Shirley writes: “The Washington Post and other major publications routinely used racist (or unsettling) terms to describe blacks and Japanese and sexist language to describe women.”

Although the Post and other major media outlets now seem focused on race and identity politics, his book demonstrates how the Post tallied the races of casualties during World War II:

On February 4, The Washington Post ran a story headlined, ‘White Race Hardest Hit by Killings.’ It made the case that white Europeans had suffered more losses in the Second World War than all other races combined.

This reference is to a Post news story with the byline of John O’Neill, published Feb. 4, 1945.

Later that month, Shirley’s book recounts, a controversy arose on the campus of the College of William and Mary that led to the Post editorial board’s supporting censorship of the student newspaper, The Flat Hat:

In Williamsburg, Virginia, the editor of the William and Mary college newspaper The Flat Hat, Miss Marilyn Kaemmerle, was fired and the paper suspended by the administration because she wrote that someday ‘Negroes should attend’ the college and ‘marry among us.’

Shirley’s book cites a news story from The Associated Press that the Post published Feb. 15, 1945, under this headline: “Editor Fired, W&M Paper Will Suspend.”

The same day, the Post ran an editorial with the headline “What Price Freedom?”

An editorial in The Washington Post on the whole matter said [Kaemmerle’s] piece ‘could be considered a grievous error in judgment.’ It called her opinion ‘highly explosive’ and impudently warned that her use of the First Amendment was ‘a freedom permitted very few journalists.’

“They knew what they were doing. It was just a southern Jim Crow newspaper,” Shirley said of the Post.

Shirley said the context of the times is not an excuse for the newspaper, which he says has been “ignorant, intolerant and bigoted,” adding that the Post continues today to be “shoddy and hopelessly biased.”

In “April 1945,” Shirley writes that the William & Mary matter gained attention in the U.S. Senate:

Several days later, a Republican member of the Senate, William Langer of North Dakota, introduced a bill that would have cut off all federal funding from any institutions of higher learning that engaged in discrimination—‘Race, creed or color’—or anyone who expressed their ‘views on racial matters.’

Interestingly enough, the Post seemed to take a different tilt.

“A few days later, The Washington Post’s editorial pages noted the beginning of ‘Brotherhood Week,’ a campaign that promoted tolerance and brotherhood as virtues,” the book says, adding:

But [the Post] did not specify if that included all using the First Amendment or just those so anointed by the knights of the keyboard of the newspaper, although it did mention ‘discrimination among men.’

Women were not mentioned, obviously second-class citizens in the eyes of The Washington Post, but then the editorial had the audacity to quote FDR [President Franklin D. Roosevelt], when he said, ‘It is, therefore, a solemn duty … to keep our country freed of prejudice and bigotry.’ Except of course, in the newsroom of The Washington Post.

Today, the Post often seems more likely to accuse political adversaries of being bigots or racists.

Aside from the cases involving the Kentucky teen and the Twitter account Libs on TikTok, recent Post pieces accusing political opponents of racism include a February column with this headline: “Republicans go back to their bottomless well of race-baiting.”

In January, a column by Jennifer Rubin expressed anger over Republican victories in the Virginia’s 2021 election. Rubin wrote that the media is too soft on Republicans, and is “all too anxious to make the authoritarian and often blatantly racist party seem ‘normal.’”

In 2021, the Post at times promoted the Democratic Party’s characterization of state voter ID laws and election reforms as “Jim Crow 2.0.”

In its “Fact Checker” column, the Post found that President Joe Biden’s description of the Georgia election reform law as “Jim Crow on steroids” was “rhetorical overkill.”

But the column didn’t call Biden’s claim false. Instead, it said: “Still, it’s a close call as the new voting law certainly appears to be a reaction to the fact that Democrats won the presidential contest and two Senate seats in 2020 on the strength of Black votes.”