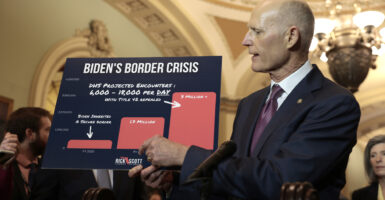 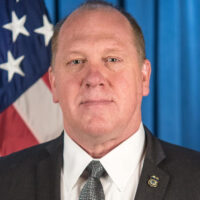 The announcement that the Biden administration is giving free smartphones to illegal aliens who recently crossed the border understandably has incensed Americans. It brings back memories of “Obamaphones.”

Although the “Bidenphone” has limited functionality and provides better immigration enforcement awareness than none at all, it underscores the better options of preventing illegal immigration and detaining those who do enter the country unlawfully.

In a nutshell, the Biden administration doesn’t want to detain deportable aliens because it knows that detention is more likely to lead to deportation. The open borders advocates have access to the same key data as the rest of the public found within the 2020 Department of Homeland Security Enforcement Lifecycle Report.

The open borders crowd knows that if illegal aliens are detained and receive a final order of removal from an immigration judge, they’ll be removed 98% of the time. The same DHS report also shows that unless a deportable alien is fully detained, 85% of them won’t be removed from the U.S.

Only 6% of family groups leave as ordered, as do about 3% of unaccompanied alien children. And let’s remember, 72% of these unaccompanied children are ages 15 to 17.

Detention is a vital tool to ensure that each illegal alien gets due process and actually sees a judge so that a court’s final decision can be carried out—whether it’s some sort of relief or an ordered departure.

Many advocates and politicians claim that these illegal immigrants have a right to claim asylum. But if they believe that is a function of the legal immigration system, then they also must stand by the decision of that legal process and respect it. Detention guarantees both.

Yet President Joe Biden’s administration is attacking detention and Congress is limiting funding for it. During 2020, President Donald Trump’s last full year in office, more than 55,000 illegal immigrants were in detention; now there are about 25,000. Next year’s proposed federal budget would cut funding from 34,000 detention beds to 25,000 beds.

Many Democrat politicians want to end detention altogether for illegal immigrants. Instead, they want to focus on “alternatives to detention.”

Biden’s most recent budget proposal requests $527.1 million, an increase of $75 million, to expand monitoring programs as one such alternative. What ICE really needs is more technology, combined with detention, for effective enforcement to carry out its important mission.

In the past, both Republican and Democrat administrations have been able to do this. But the Biden administration is singularly focused on alternatives to detention rather than on detaining anyone who is here unlawfully.

This is where the smartphones come in.

An estimated 10 to 12 million individuals currently have unresolved immigration cases in the United States. U.S. Immigration and Customs Enforcement, or ICE, is monitoring only a small percentage of deportable aliens who are awaiting an immigration hearing—approximately 213,000 individuals of the 4 million on the “nondetained” docket.

ICE uses these “Bidenphones” or other monitoring devices as a way to supervise aliens placed into removal proceedings, to ensure that they comply with the terms of their release.

To be clear, Immigration and Customs Enforcement doesn’t issue free, all-purpose phones to illegal immigrants. These devices only allow the individual to make a 911 call or to contact the ICE officer assigned to his or her case, according to the terms of release.

The supervision applications are preinstalled in the phones. Officers assign the device to an illegal alien and power on the unit. Functionality is completely controlled by the agency. Participants are unable to disable features or install third-party applications.

In addition, an illegal alien has no ability to browse the internet, make unauthorized phone calls, access app stores, manipulate the phone settings, or send or receive text messages. However, the device does have GPS capability.

This mobile monitoring app provides a secure platform for communication between the ICE officer and the illegal alien.

When a presidential administration and Congress are controlled by advocates of open borders and nonenforcement of immigration laws, alternatives to detention—including these immigration phones—are the minimalist form of monitoring. They are better than releasing migrants with no oversight, no monitoring, and no GPS capability.

Illegal aliens certainly could toss the “Bidenphone” device in a lake and disappear, but data shows that most do not. Instead, most deportable aliens abscond after receiving a final order of removal.

If a monitoring device maintains a good success rate, as it has thus far, more aliens will be in court when they receive a final order of removal.

Immigration judges also order aliens be removed even though they fail to appear in court. These are known as “in absentia” orders, which aliens often appeal, claiming they didn’t receive notice of the hearing and have a right to be heard. These appeals delay the final outcome for years—to the deportable alien’s benefit.

A device that will increase the likelihood that an illegal alien appears in court to hear a decision in person is a net benefit.

Again, to be clear, detention is the most successful way to ensure migrants receive due process and a swift removal when so ordered by a court. The “catch and release” policy sends a bad message to the rest of the world: Enter our country illegally and you will be set free.

That’s why the Trump administration ended such policies.

In the end, preventing illegal immigration is the best policy. For those aliens who do illegally enter the country, ICE should fill its detention capacity.

In reality, some aliens will have to be released for a myriad of reasons. But at the least, the Department of Homeland Security has an obligation to monitor released illegal immigrants to know where they are and to hold them accountable.