Political Deck Stacked Against Parents Running for School Board 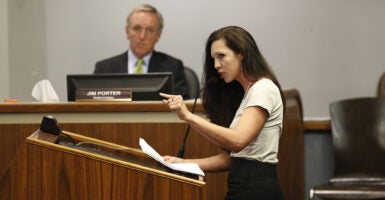 The chasm between school boards and parents has been exposed, and parents are running for board seats to change that. But the political process is structured to protect the interests of teachers unions. Pictured: Parents and others speak out about mask mandates for schoolchildren during a Hillsborough County School Board meeting July 27 in Tampa, Florida. (Photo: Octavio Jones/Getty Images)

Benjamin Tardif is a Spring 2022 member of the Young Leaders Program at The Heritage Foundation.

“I don’t think parents should be telling schools what they should teach.”

Those were the famous words of Terry McAuliffe’s failed gubernatorial campaign in Virginia last fall.

The past two years of the COVID-19 pandemic exposed just how little control parents have over their children’s public school education. And their powerlessness did not end when many schools finally reopened their doors over a year into the pandemic. Parents across the nation still find themselves unable to access the materials used in their kids’ public school curricula.

The deep chasm between the agendas of school board members and the interests of parents and their children has been exposed, and many parents are beginning to feel they must join the school boards themselves to make any real change in their children’s education.

And that’s exactly what they’re doing. Parents with no experience working in the education system are running for and winning school board seats.

One such parent is Koleen Crawford of Londonderry, New Hampshire. Recognizing that remote learning during the pandemic resulted in significant learning loss for children, she laid out her reasons for running for a school board seat, stating, “I’m hoping to help bridge that gap to get our kids back to where they need to be academically.”

Texas resident Scott Henry had never run for any sort of political office and had no political aspirations of any kind. In an interview with the Washington Examiner, Henry cited “the lack of transparency and accountability in our board” as the catalyst for his decision to run.

In addition to running for open seats, parents are attempting to recall school board members in record numbers. Even in leftist San Francisco, voters successfully recalled three incumbent school board members earlier this year after residents became frustrated with the board’s priorities: renaming 44 schools and watering down the admissions process at one of its best high schools, all while running a $125 million deficit and keeping schools closed.

However, not all recall efforts have been successful—though the efforts themselves still send a powerful message.

New research from Michael Hartney of Boston College confirms and strengthens earlier findings that teachers unions “remain a potent force” in school board elections. In other work, Hartney says, “The important reality is that thousands of school board members will be ‘elected’ by tiny and unrepresentative electorates prior to next November’s general election.”

Teachers unions lobby school districts to hold elections off-cycle, that is, not at the same time as national elections. With many elections occurring in the spring or during odd years, most citizens who aren’t union members aren’t paying close attention and thus don’t show up to vote.

As Sarah Anzia of the University of California, Berkeley, points out, “Members of interest groups with a large stake in an election outcome turn out at high rates regardless of election timing, and their efforts to mobilize and persuade voters have a greater impact when turnout is low.”

Earlier research by Anzia confirms that not only do off-cycle elections decrease voter turnout, but they also lead to policy outcomes more favored by teachers unions.

This issue is widespread. Hartney’s new research shows that “union favored candidates tend to win in both strong and weak union states and in conservative and liberal school districts.” In our own data collection at The Heritage Foundation, we counted only 15 states and the District of Columbia where all districts hold regular school board elections in November of even years—in other words, during regular election cycles where turnout is higher.

Given the current system, concerned parents are unlikely to consistently win elections for school boards with such a political process structured toward protecting existing organized interests.

To counter this, policymakers should empower parents to educate their children in accordance with their preferences and values through legislation that allows for the creation of education savings accounts.

Education savings accounts provide parents with the option of removing their student from a public school and getting a portion of the taxpayer money that would normally fund their child’s public school education to use for private school, homeschooling, or other educational arrangement. Lawmakers in 10 states have made accounts available to K-12 students and their families.

Whether it be private school, online curriculum, or private tutoring, the key component is that the people who know the student best are making the choices, not a teachers union or government bureaucrat. Parents have every right to be in control of their child’s education. It’s time for our education system to reflect that.