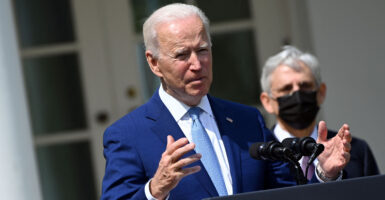 The president of the National School Boards Association says that a White House meeting prompted Attorney General Merrick Garland to direct the FBI to investigate parents who disagree with their local school boards over issues such as critical race theory, gender identity, and mask mandates.

Members of the NSBA board speculated among themselves that the group’s executive director and CEO, Chip Slaven, was using the national association’s letter to President Joe Biden requesting such action to jockey for a spot in the Biden administration.

This information and more is contained in a recently released batch of emails and memos, which also note tension among the national association’s board members about the wisdom of pushing federal intervention in local school matters.

Parents Defending Education, an advocacy group, obtained the information about the White House involvement and other details through public records requests and made it available Thursday and Friday.

The National School Boards Association did not respond to phone and email inquiries from The Daily Signal about the revelations.

Here are six big takeaways from the information about the national association, Garland, and the Biden White House that has come to light.

Less than two weeks later, the NSBA’s Sept. 29 letter to Biden was publicized in The Washington Post and elsewhere. The letter called on the U.S. government to apply the post-9/11 Patriot Act, among other laws, to some parents deemed to be an “immediate threat” to education officials.

The following Monday, Oct. 4, Garland issued a memo directing the Justice Department and the FBI to “address the rise in criminal conduct directed toward school personnel.”

After the memo ignited a political firestorm among activists and conservative lawmakers, the NSBA apologized for the language of its letter to Biden and a link to the letter now comes up blank.

But in her Oct. 12 memo, the National School Boards Association’s Garcia seemed to take credit for Garland’s ordering of investigations.

“In response to the letter sent by NSBA, on Oct. 4, 2021 the attorney general announced in a memorandum widely shared throughout the U.S. Department of Justice that he was ordering all U.S. Attorney Offices and local FBI offices to reach out to local and state law enforcement officials to coordinate efforts on this problem within 30 days of the memorandum,” Garcia wrote.

Before disclosure of the White House meeting, the watchdog group America First Legal asked the Justice Department’s Office of Inspector General to investigate the White House’s role in the Garland memo.

In its complaint, the group referenced a staffer from the White House Domestic Policy Council who sought an “outside group” that would not be one of the “usual suspects” to request federal action against protesting school parents.

2. Board Members Object to Biden Letter

Garcia’s Oct. 12 memo refers to the Sept. 14 meeting at the White House. Emails show that at least two state association officials questioned whether leadership of the National School Boards Association provided information to other board members—most of whom are affiliated with state associations—before sending the Sept. 29 letter to Biden.

“Clearly, this was orchestrated and the letter was contrived for political theater,” reads an Oct. 5 email about the letter to Biden. Sally Smith, executive director of the Alabama Association of School Boards, wrote the email to that group’s members.

Pam Doyle, past president of the Alabama Association of School Boards, wrote several fellow NSBA board members Oct. 11 after seeing a draft of Garcia’s Oct. 12 memo about the White House meeting that preceded the NSBA’s letter to Biden.

If I read the above paragraphs correctly, the origin of the letter began Sept. 14 with a meeting with the White House staff, but fails to specify who met with the White House staff. … The members asked specifically who wrote the letter, by what authority the letter was written, and who or how many states asked for federal intervention. This letter fails to adequately answer the specific questions about the lack of input from the members and [NSBA] board in the letter to the president.

“Did the items Pam [Doyle] has in red happen?” Slough asked. “If they did, execs should have known the letter [to Biden] was going.”

Messina responded that she wasn’t aware, but Slaven—NSBA’s executive director—might have said something about it:

Chip [Slaven] very well may have informed us that he had spoken with the White House that morning. Regretfully, he said that every time I get on a call with him so I don’t pay attention.

In an Oct. 10 email, Doyle told Slough that she suspected political motives by Slaven.

“I had one exec say they thought it was a coup between Chip [Slaven] and the White House in positioning Chip for a place in the Biden square,” Doyle wrote. “I’m not surprised at anything coming from that man or the officers.”

Doyle added: “Keep your fingers crossed—firing Chip would be a first step in the right direction.”

Slaven became executive director of the National School Boards Association in July after a background in Democrat politics.

He previously was director of federal policy and intergovernmental affairs for West Virginia Gov. Robert E. Wise, a Democrat who served from 2001 to 2005. Slaven also was Wise’s congressional district director when Wise served earlier in the U.S. House of Representatives.

In 2008, Slaven contributed $250 to the unsuccessful House campaign of Talley Sergent, also in West Virginia.

Charlie Wilson, another board member of the National School Boards Association, told his school board colleagues in Worthington, Ohio, that he pushed the national association’s letter to Biden about investigating dissenting parents.

In a Sept. 30 email, Wilson wrote: “Dear Colleagues, Attached is the NSBA letter I requested be sent to President Biden concerning threats across the country.”

Wilson continued with a point of local pride: “NPR featured the letter on its news tonight. You will see that Worthington is mentioned in the letter.”

Wilson is immediate past president of the National School Boards Association.

Garland’s son-in-law, Alexander Tanner, is an executive with Panorama Education, a company that makes money off the use of critical race theory in schools.

The teaching of critical race theory, or using it to frame classroom lessons, is a major issue that parents protest at local school board meetings.

Janine Bay Teske, of Wyoming’s Teton County School District No. 1 and an NSBA board member, included an email attachment to a story about Garland’s son-in-law’s stake in Panorama Education, which promotes critical race theory in public schools.

That was one day after Garcia’s memo explaining the Sept. 14 White House meeting that prompted the Sept. 29 NSBA letter to Biden and Garland’s Oct. 4 call for investigating parents who challenged local school boards.

We pay for the Panorama SEL and Climate Surveys and data dashboard. WDE [the Wyoming Department of Education] uses Panorama for one of the Alternative School Accountability Metrics.

In an email thread among several NSBA board members, Ronnie Hopkins, also on the school board in Jefferson City, Georgia, wrote Oct. 1: “One of the last things I need is the federal government telling me how to run my school.”

Slough, the school board member in St. Augustine, Florida, said in the email chain: “I am so upset. Moms for Liberty will have a field day with this!”

The next day, the Florida School Boards Association’s Messina wrote: “If they [NSBA leadership] were truly concerned about safety, it would not have been accompanied by a press release and media interviews. They made it about NSBA, not safety.”