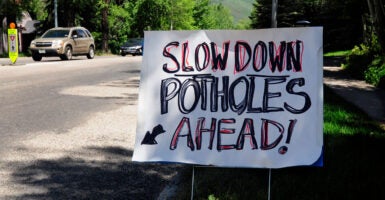 A hand-lettered sign posted alongside an Aspen, Colorado, street on June 11, 2017, warns motorists of potholes. Drivers everywhere should prepare for figurative transportation potholes ahead because of Biden administration policies. (Photo: Robert Alexander/Getty Images)

Just a few months ago, Washington celebrated the passage of a bloated infrastructure bill. Supporters trotted out tired claims about fixing “crumbling roads and bridges” using gobs of taxpayer money.

Yet even if we assume a certain amount of waste, fraud, and abuse due to the problems inherent with federal involvement, Americans might reasonably expect that more than $1 trillion in spending would at least make things better.

Sadly, a crowded intersection of federal blunders could block drivers from getting much benefit from the spending spree.

There are many factors that go into the price of gas, including taxes, distribution, and refining. However, gas price spikes are primarily caused by run-ups in the market price of crude oil.

The Biden administration has decided to blame high oil prices on the Russian invasion of Ukraine. Yet most of the increase in the price of oil over the past year took place before the war began.

Unfortunately, President Joe Biden has outsourced energy policy to activists who want to sabotage the American energy industry, rather than allow it to thrive. Preventing energy production across huge swaths of U.S. territory with “moratoriums” and “pauses” sends a strong signal to global markets that we won’t increase our supply, increasing the expectation of scarcity.

High prices are an inevitable result.

It’s not too late for Biden to unleash domestic production, but so far there is no indication that he will change course.

That means drivers can expect to face continued pain at the pump.

When we hear about new spending on highways, some of the first things that come to mind are adding lanes to address congestion and fixing bad pavement. Yet despite record amounts of supposed highway funding, Congress and the Biden administration are working overtime to detour the money elsewhere.

One factor is the left’s wildly unrealistic Vision Zero agenda, which uses language about safety in an attempt to justify throwing federal cash at purely local projects like bike lanes, sidewalks, and even lane-reduction plans known as “road diets” that are designed to increase congestion.

Legislators have also buried pork spending inside the “highway” category.

The Transportation Alternatives Program is used as a multibillion-dollar slush fund for local projects, such as recreational trails and “streetscape improvements” that are far removed from the highway system. The Congestion Mitigation and Air Quality Program operates similarly, doling out taxpayer dollars for absurd boondoggles, such as streetcars.

Amazingly, the infrastructure bill even included $1 billion for a new Reconnecting Communities Pilot Program that would tear down highway infrastructure linked to racial grievances.

The next time a member of Congress says he or she needs more of your money to improve “crumbling roads and bridges,” remember how Congress used this “highway” spending.

That would have been a bad idea before the pandemic, when transit and rail combined for less than one-twenty-fifth as much of America’s travel usage as roads. It makes even less sense in the wake of the COVID-19 pandemic, which has caused transit ridership to crater, as many white-collar workers go remote rather than commuting downtown every day.

Throwing billions into expanding intercity rail is also a recipe for waste, no matter how much the left pretends otherwise.

Too many members of Congress subscribe to an “if you scratch my back, I’ll scratch yours” mindset, thinking that it’s OK to dump tens of billions of dollars into pits like transit and rail as long as the “highway” category also gets a boost. Unfortunately, that mindset is a big reason why we now have $30 trillion in debt without much to show for it, and why about one-third of spending from the Highway Trust Fund doesn’t even go to roads or bridges.

After the infrastructure bill passed, Secretary of Transportation Pete Buttigieg oversaw the production of a “guidance memo” for state governments relating to how projects qualify for the new funding.

The memo informs states that projects to expand highway capacity should go to the back of the line, even though the infrastructure bill said no such thing. This attempt to rewrite law through obscure bureaucratic documents is sadly all too common and led to firm pushback from Republicans.

At a hearing on March 2, Sen. Shelley Moore Capito, R-W.Va., pointed out that the administration’s memo mirrored language from a Democratic infrastructure bill that didn’t pass. Buttigieg tried to sneak in the left-wing approach anyway.

While that debate might seem like a mere technicality, federal agencies overstepping their boundaries is a serious threat to democracy, as we have seen repeatedly when it comes to COVID-19 rules.

Both the infrastructure bill and the Biden administration’s implementation have gone to great lengths to reduce the value of taxpayer spending for the sake of padding the bottom lines of labor unions.

Biden followed this up by mandating Project Labor Agreements on major initiatives. This essentially freezes out nonunion contractors and will result in even more cost inflation for taxpayers.

A hidden handout for Big Labor is the funding boost for mass transit. Public transit workers are unionized and overwhelmingly work in left-leaning locales. Since government workers are a reliable part of left-wing political machines, it should come as no surprise that they receive lopsided and excessive compensation packages.

Throwing more money at transit will mean inflating those wages and benefits faster than ever.

These five policy potholes should come as no surprise after decades of increasing federal control over infrastructure.

Rather than trying the same top-down approach the next time around, the American public must tell Washington that it’s time to give the power back.