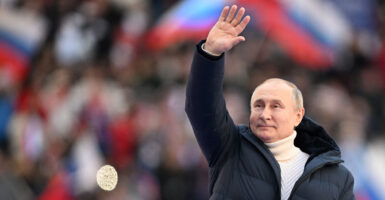 We must take the threat of the use of Russian nuclear weapons seriously, surveil it intensely, and prepare for a possible nuclear event. Pictured: Russian President Vladimir Putin greets the crowd during a March 18 concert marking the eighth anniversary of Russia's annexation of Crimea from Ukraine at the Luzhniki stadium in Moscow. (Photo: Ramil Sitdikov/Pool/AFP/Getty Images)

With Russian forces struggling mightily to subjugate Ukraine in the face of incredible resistance from both the Ukrainian army and ordinary citizens, observers are concerned about the Kremlin escalating the war with the use of nuclear weapons.

Moscow could certainly decide to move the war from conventional to nuclear at any time. As such, we must take the threat of the use of Russian nuclear weapons very seriously, surveil it intensely, and prepare for the possibility of a nuclear event.

But under what circumstances might Russia use a nuke against Ukraine—or as part of the Ukraine conflict?

Dmitry Medvedev, former Russian president and current deputy chairman of the Russian Security Council, outlined Moscow’s policy on using nuclear weapons in an interview Saturday, according to The Guardian:

Number one is the situation when Russia is struck by a nuclear missile. The second case is any use of other nuclear weapons against Russia or its allies.

The third is an attack on a critical infrastructure that will have paralyzed our nuclear deterrent forces, and the fourth case is when an act of aggression is committed against Russia and its allies, which jeopardized the existence of the country itself, even without the use of nuclear weapons, that is, with the use of conventional weapons.

That’s relatively clear, but that’s not all.

Russia also has a secretive “escalate to deescalate” doctrine for the use of nuclear weapons that Medvedev didn’t mention—unsurprisingly—in that list of four conditions. This unspoken possibility is perhaps the most likely scenario of all.

Let’s face it: The war isn’t going well for Vladimir Putin & Co. What the Kremlin thought would be a three-day dash to Kyiv has turned into a monthlong slog, which has seen Russian forces losing general officers, troops, and equipment at an alarming rate.

The outcome—once thought to overwhelmingly favor Moscow—is up for grabs.

That state of affairs doesn’t bode well for the Kremlin and its cronies. Even authoritarian leaders care about public opinion at home and the effect it might have on the regime’s control over the country.

Losing the war in Ukraine would have repercussions on Russia internationally, too, including significant reputational costs, likely diplomatic pariah status, punishing economic costs, and a demoralized, depleted military.

In other words, losing in Ukraine will be plenty painful for Putin and his pals—and this is when, unfortunately, the use of nuclear weapons potentially comes into play for the Russians.

Indeed, Putin might use a nuke (or more) in an (as yet unproven) “escalate to deescalate” plan for advancing Russia’s unjust goals in Ukraine.

Although there is debate about the effectiveness of using a nuke on the battlefield in Ukraine, alternatively Russia could pop off a low-yield, tactical (aka battlefield) nuke over an unpopulated area, or even the Arctic Ocean.

The point would be to send a clear signal to the U.S., NATO, and others who are supporting the Ukrainian political and military resistance that their backing must end—immediately.

If they choose otherwise, the risk would be that Moscow might escalate from a single, low-yield battlefield nuke over an unpopulated territory to high-yield theater or intercontinental-range nukes targeting populated areas in these countries.

The Kremlin might calculate that Ukraine’s supporters (e.g., NATO) don’t have the political will to risk a wider conflict or chance a move up the nuclear-escalation ladder.

Ukraine’s backers—and Ukraine itself—would have to make some fateful choices.

Using the “escalate to deescalate” nuclear stratagem, Moscow potentially could force any number of advantageous political and military outcomes to the war in Ukraine, including a victory that avoids the unpleasantries of a loss.

Of course, the use of a nuclear weapon in war for the first time since World War II is a troubling idea to contemplate. But we must understand that the Russian political and military playbook includes pages on the use of nukes.

Consequently, we must consider Russia’s use of nuclear weapons a real possibility, monitor the movement of Russian nuclear forces with vigor, and prepare for making the tough choices that the possibility of a nuclear event would bring.