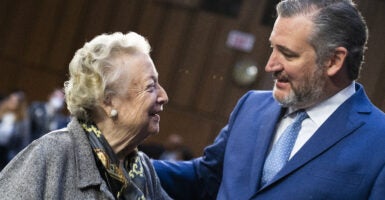 Advocates for and against the judge’s nomination expressed their endorsement and opposition before the Senate committee.

One panel included three members of the American Bar Association’s Standing Committee on the Federal Judiciary, which unanimously gave Jackson its highest rating of “well qualified.” A second panel included five witnesses called by Democrats and five by Republicans.

“The trend by certain judges to decrease sentences far below the advisory sentencing guidelines and prosecutor’s recommendations for CSAM [child sexual abuse material] consumers minimizes the gravity of the offense,” Serano told the Judiciary Committee.

“While the amount of material being produced and number of people consuming this material has increased exponentially over recent years, the sentences have decreased. This makes no sense,” she said.

Democrats on the committee contend that Jackson’s sentences are not outside the mainstream of judges for such offenses.

Serano said the justice system sometimes issues sentences as if the offender was only viewing pictures, rather than creating demand in a toxic industry.

2. ‘A Perspective on Criminal Justice’

Democrats on the committee again pushed back against Republican claims that Jackson has been soft on crime by pointing to support for her nomination from organizations such as the International Association of Chiefs of Police, the Fraternal Order of Police, and the National Organization of Black Law Enforcement Executives.

“One was a detective for Miami-Dade County, and the other rose through the ranks to become chief of police for the Miami Police Department,” Thomas said.

“In addition, her brother served as an undercover officer in a drug sting unit in Baltimore after graduating from college,” he said. “It is our opinion that her direct familiarity with the complexities, challenges, and opportunities within law enforcement provides a perspective on criminal justice issues that can be an asset to the Supreme Court.”

3. ‘He Is the President of This Country’

In his testimony, Alabama Attorney General Steve Marshall, a Republican, opposed Jackson’s nomination and raised concerns about her being soft on crime.

But Sen. Sheldon Whitehouse, D-R.I., known for digressing, began asking Marshall about the riot at the Capitol on Jan. 6, 2021, and Marshall’s membership in the Republican Attorneys General Association.

That group was involved in a robocall supporting former President Donald Trump’s allegation that the 2020 election was stolen.

“Is Joseph R. Biden of Delaware the duly elected and lawfully serving president of the United States of America?” Whitehouse asked.

Marshall responded: “He is the president of this country.”

Whitehouse persisted: “Is he the duly elected and lawfully serving president of the United States?”

Marshall again responded, “He is the president of our country.”

Whitehouse: “Are you answering that omitting the language ‘duly elected and lawfully serving’ purposely?”

Marshall: “I’m answering the question. He is the president of the United States.”

Whitehosue: “And you have no view whether he is duly elected and lawfully serving?”

Marshall: “I’m telling you he is the president of the United States.”

At that, Whitehouse said, “No further questions.”

Eleanor McCullen, who identified herself as a sidewalk counselor for women arriving at abortion clinics, explained that in Boston she approaches such women in a respectful way. She hands out a business card that says: “Hope, Help and Love.”

“I have the privilege of offering hope and offering a different choice—one that empowers the woman to know she is fully capable of becoming a mom and having a successful and happy life,” McCullen told the Judiciary Committee.

McCullen and others were restrained by a 2007 Massachusetts law imposing a 6-foot “buffer zone” between pro-life protesters and anyone entering an abortion clinic.

Jackson, as a private lawyer, co-authored an amicus brief on behalf of NARAL Pro-Choice America supporting that law. In 2014, the Supreme Court, in a 9-0 decision, overturned the law as violating the First Amendment.

Her misrepresentations certainly don’t describe me or any of the sidewalk counselors that I have worked with over the years who provide support, love, and options to women. Indeed, the entire reason I challenged the buffer zone law was because I did not want to shout from a distance or come across as insensitive or compassionless to the women and families I served with love. … So I stood for women, for their children, and for every American’s right to free speech, regardless of their views on life and abortion.

McCullen has helped arrange jobs, education, and financial support for mothers who opted not to have an abortion. She recounted the story of one mother who contacted her in the last week to say that her daughter Rose was 18 and starting college.

“One of the greatest blessings of my life has been witnessing a woman’s life transformed as she realizes she is fully capable of being a mom and having a happy and successful life,” McCullen said. “And being able to watch their children grow up—children who might not be here, had the mother not stopped to talk to me there on the sidewalk—is an incredible privilege.”

Critical race theory, like other versions of critical theory teaching that all relationships are about power, is a problematic view for a judge, said Keisha Russell, counsel for First Liberty Institute.

“A judge who embraces critical race theory’s perspective that America must address racism by encouraging racism cannot be an impartial judge,” Russell, the daughter of Jamaican immigrants, told the committee.

In an April 2015 speech at the University of Chicago, Jackson said: “Sentencing is just plain interesting because it melds together myriad types of law, criminal law, and of course constitutional law, critical race theory.”

Jackson said during her first day of Senate testimony this week that she hadn’t studied critical race theory.

Russell said adherence to CRT removes the principle of equality before the law.

“If a judge believes that the only way to correct racism is to provide advantages to blacks and disadvantages to whites, this would create dire injustices in that judge’s practices,” Russell said, adding:

Every lawyer and judge promises to defend and protect the U.S. Constitution, but she cannot uphold this oath if she believes that the Constitution and the principles of America’s foundation are racist and inherently flawed.

Neither can a judge remain impartial and administer justice independently if she holds a philosophy that correcting racism requires affording privileged classes less justice than oppressed classes.