Same-Sex Marriage Bill Threatening Religious Freedom Heads to Biden’s Desk: Here Are the 39 Republicans Who Voted for It

‘Respect for Marriage Act’: You Will Be Made to Celebrate 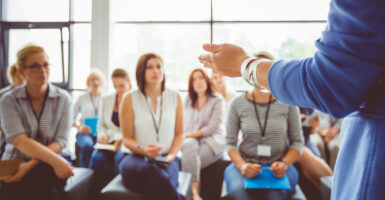 A staff member at one of the nation’s largest school districts said he participated in a “cult retreat-like experience” during a teacher training session, according to a report from Parents Defending Education, a national nonprofit focused on parents’ roles in education.

The Los Angeles Unified School District used materials drafted by the California Conference for Equality and Justice, a nonprofit group aiming to “eliminate bias, bigotry, and racism through providing anti-bias education,” for a training session where educators participated in “socioemotional learning” and affirmed “critical social justice gender ideology,” according to a report from Parents Defending Education.

One Los Angeles Unified School District staff member told Parents Defending Education that participants were led by a “restorative justice teacher” in lessons regarding gender and race in schools.

“Trainers called for us [educators] to raise our hands if we could commit to using preferred pronouns and stand up if we commit to using trans students’ preferred names,” the staffer said, adding that if they didn’t stand up “it was an obvious sign that you’re problematic and bigoted and in the wrong.”

Educators were also given a handout titled “Identity Working Terms” to “address when students or staff make an ‘unacceptable’ error in words or actions that are against gender ideology.”

The California Conference for Equality and Justice training materials defined gender identity as “our innermost feelings of who we are as a woman, man, both, and/or neither,” which can be demonstrated by “the ways we act,” “our clothing,” “hairstyles,” “makeup use,” “our voice,” “the ways we move our bodies,” and “other forms of presentation.”

Another slide titled “Interrupting Bias: Calling Out vs. Calling In” tells staffers instances where they should “call out” when someone’s “words or actions are unacceptable and will not be tolerated,” and “interrupt in order to prevent further harm,” which “will likely feel hard and uncomfortable, but necessary.”

The trainings included a staff checklist provided to educators if they have transgender or binary students, asking what names and pronouns the student will use, reminding them that some students use multiple pronouns or no pronouns at all, and whether their gender marker is changed in the student’s database.

Other considerations included what bathrooms the student will use, if the student has “affirming family members,” and if the school has connected the family to parent support groups, reminding them that this must be done only if it is safe for the child after asking the student about “family dynamics.”

“All students have the right to be referred to by their chosen name/pronouns, regardless of their legal or school records,” the handout states. “A legal name change is NOT required for unofficial name changes” and “no parent/guardian permission or notification is required for student-initiated name changes.”

Another page includes a slide featuring a “Gender Unicorn” and a graphic that teaches that gender identity and gender expression are on a spectrum, including feelings about those to whom they are “physically” and “emotionally” attracted.

“Pressuring LAUSD employees to adopt language with which they may disagree—and encouraging others to bully, intimidate, and silence dissenting views—is appalling,” Nicole Neily, president of Parents Defending Education, said in a statement shared with the Daily Caller News Foundation.

“This took place during an all-staff mandated school hours ‘training’ during a shortened school day, which places a significant burden on working families,” she added. “By prioritizing topics like this over students’ mastery of core subject areas, district administrators have shown that they prioritize social issues over learning.”

The Los Angeles Unified School District and the California Conference for Equality and Justice did not respond to the Daily Caller News Foundation’s request for comment.