She Was in Kyiv the Day Russia Invaded Ukraine. Here’s What She Saw. 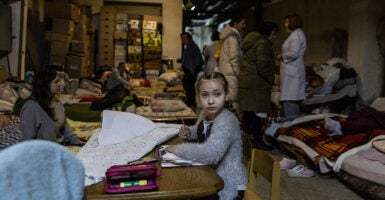 Many Ukrainians were able to escape the capital, Kyiv, and other cities under attack by Russia, but many more remain in danger in Ukraine. Pictured: A girl draws March 1 at a table set up in a bomb shelter at Okhmadet Children's Hospital in Kyiv. (Photo: Chris McGrath/Getty Images)

Kateryna Shapovalenko woke up at 5 a.m. Feb. 24 to the sound of missiles slamming into buildings in the Ukrainian capital of Kyiv. Confused and terrified, the 23-year-old woman began receiving calls from her friends and family confirming her worst fears: Russia was invading.

“February 24th was a very terrible moment. I think it was the worst-ever experience of my entire life,” Shapovalenko said in an interview with The Daily Signal. “I was shocked. I was really terrified. My heartbeat just skyrocketed.”

Shapovalenko detailed how she, and many others in Kyiv, quickly packed some belongings and ran. For many, there was no final destination, only the cruel reality that they could no longer stay in Ukraine’s capital city.

“When I got out from my apartment, I was starting to go to some safer place to meet my friends,” she said. “It was very lively on the street. So many people were trying to go somewhere. Many people with suitcases packed with their most essential belongings.”

Adding to the chaos and confusion, credit and debit cards and cash-payment apps stopped working. Shapovalenko said that made it difficult to purchase supplies for the long journey ahead.

Shapovalenko headed to the Kyiv Metro subway station, where a grim sight greeted her.

“Inside the Metro, I saw so many people,” she said. “It was really terrible and terrifying. And people were really frustrated and desperate. They didn’t know what was actually happening around them.”

Shapovalenko eventually managed to escape to neighboring Poland, where she made her way to Germany and eventually the U.S. She is currently safe in Arizona, but says she has family and friends back in Ukraine.

“Half of my family, they managed to stay in a village in the northern part of Ukraine, which is safer,” Shapovalenko said. “Whereas my uncle and auntie, they’re staying in Chernihiv, which is a city on high attack by the Russians.”

But through all the pain and ruin inflicted by Russian President Vladimir Putin on the Ukrainian people, strong themes of resistance run. The successful defiance demonstrated by the Ukrainians against their would-be Russian occupiers has surprised those who expected Ukraine simply to collapse.

“I think currently the entire world is really surprised by the way the Ukrainians responded,” said Shapovalenko, who compared the fight the Ukrainians are waging against Russia to America’s Revolution against the British:

When asked about what she thinks the future holds for Ukraine, Shapovalenko offered a hopeful view. She said she thinks the shared suffering will solidify a sense of Ukrainian self and bring disparate Ukrainians together.

“I think this particular war will completely transform Ukraine in a positive way,” she said. “Because before this war, people were thinking, ‘What would be the Ukrainian idea? What unites us?’ But right now, we see that the only [thing] that unites all of Ukrainians is freedom.”

“We want to be all together,” she said. “We stand all together for freedom. And I think after the war, people will be very united, and they will value every single time they spend with their families.”

For now, Shapovalenko will remain in America. It’s too dangerous right now to go back to Ukraine, she said.

But she also said the war has changed how she views her destiny within the future of Ukraine and its people.

“This particular war transformed me completely,” she said. “I hadn’t planned on coming to the U.S. right now. It was a forced decision, because I wanted just to save my own life. After this, I really want to come back to Ukraine and continue working on making Ukraine the best place in the world.”