If Putin Attacks a NATO Country, What Are Our Legal Obligations? 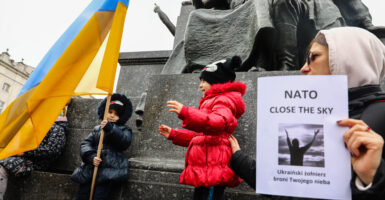 What are the United States’ legal obligations if Russian President Vladimir Putin orders his military to invade a NATO country and NATO invokes Article 5 of the treaty, the collective self-defense provision?

The answer to this legal question, which is complicated, is the narrow focus on this article. Before diving in, however, it’s important to start with a few caveats.

First, as my colleagues have already written (see here, here, here and here), Putin’s invasion of Ukraine, a non-NATO country, has been unlawful, despicable, and totally unwarranted. Ukrainian President Volodymyr Zelenskyy, a former actor and comedian before running for office, has been nothing short of inspiring, brave, and patriotic, as have the people of Ukraine.

At this point in time, given the Russian military’s lackluster and uncoordinated military assault across the country, and the stiff resistance by the Ukrainian military and civilian population, it’s an open question of whether Russia will succeed in its military objective. But given the sheer size of the Russian military, its willingness to unlawfully target civilians and carry out other actions arguably in violation of the law of war and the Geneva Conventions, it may, over time, succeed.

Second, the answer to the legal question posed above does not—and is not intended to—answer the following very important questions: If a NATO country is invaded, do we have a moral obligation to send American forces in harm’s way? Would it be in our nation’s interest to send American forces? Would sending American forces, or providing other military, intelligence, or logistical assistance, increase the chances of a world war?

The narrow focus of this article is solely on delineating our legal obligations.

Third, sprinkled throughout the Q&A below are hyperlinks to previous opinions by the Office of Legal Counsel in the Justice Department across several administrations. No doubt, if, God forbid, Putin was successful in Ukraine and decided to invade a NATO country, administration lawyers and scholars in the law of war would turn to these (and related) Office of Legal Counsel opinions for guidance. As such, we have a fairly good starting point.

Fourth, this is a complicated issue. This article is not meant to be a comprehensive explanation or analysis of our domestic or international legal obligations. Rather, it should be read as merely a starting point for those interested in delving more deeply into the issues, should this scenario come to pass. Let’s hope and pray they do not.

QUESTION: What is the North Atlantic Treaty Organization?

ANSWER: The North Atlantic Treaty Organization, as stated on the State Department website, was created in 1949 by the United States, Canada, and several Western European nations to provide collective security against the then-Soviet Union. It was the first peacetime military alliance the United States entered into outside of the Western Hemisphere.

QUESTION: What is the North Atlantic Treaty?

ANSWER: A series of events in Europe between 1947 and 1948 caused the nations of Western Europe to become concerned about their physical and political security and caused the United States to become more closely involved in European affairs.

Great Britain, France, the Netherlands, and Luxembourg signed the Brussels Treaty in March 1948, which provided that if any one of their countries was attacked, the others were required to help defend it. Two months later, Sen. Arthur Vandenberg proposed a resolution that President Harry Truman seek a security treaty with Europe.

When that resolution passed, negotiations began for the North Atlantic Treaty. European nations wanted assurances that the United States would intervene automatically in the event of an attack on a member country.

But as I have written elsewhere, the power to declare war (Article I, Section 8, Clause 11 of the Constitution) rests with Congress alone, so they worked out language (see below) that respected our constitutional framework.

QUESTION: What countries are members of NATO today?

ANSWER: As of today, there are 30 NATO countries, including the United States, the United Kingdom, France, Germany, Italy, Poland, Spain, and others (found here).

QUESTION: What does Article 5 say?

ANSWER: The text of Article 5 of the treaty is:

The Parties agree that an armed attack against one or more of them in Europe or North America shall be considered an attack against them all and consequently they agree that, if such an armed attack occurs, each of them, in exercise of the right of individual or collective self-defense recognized by Article 51 of the Charter of the United Nations, will assist the Party or Parties so attacked by taking forthwith, individually and in concert with the other Parties, such action as it deems necessary, including the use of armed force, to restore and maintain the security of the North Atlantic area.

QUESTION: Why is Article 11 of the treaty important?

ANSWER: The text of Article 11 reads:

This Treaty shall be ratified and its provisions carried out by the Parties in accordance with their respective constitutional processes. The instruments of ratification shall be deposited as soon as possible with the Government of the United States of America, which will notify all the other signatories of each deposit.

The Treaty shall enter into force between the States which have ratified it as soon as the ratifications of the majority of the signatories, including the ratifications of Belgium, Canada, France, Luxembourg, the Netherlands, the United Kingdom and the United States, have been deposited and shall come into effect with respect to other States on the date of the deposit of their ratifications.

The key language to focus on, from a legal perspective, is “in accordance with their respective constitutional processes.” That is the compromise language hammered out by the United States delegation and Western European countries.

This recognizes the fact that only Congress can declare war or pass an Authorization for the Use of Military Force, which I have written about in a different context here.

QUESTION: In deciding whether to order the armed forces of the United States into harm’s way, are there threshold questions to answer?

ANSWER: Yes. There are two: (1) Is it in the national security interests of the United States to do so, and (2) Do the actions of the party (in this case, Russia) amount to an “armed attack” as defined by Article 51 of the U.N. charter?

QUESTION: Does an attack on a NATO ally require—as a matter of international law—the United States to respond with force?

ANSWER: No. We would never agree to that. As one law of war expert recently explained to me, from a policy perspective, it has been important to convey the impression that we would respond to an armed attack on a NATO ally with military force.

QUESTION: If a U.S. president wants to respond militarily to an attack on a NATO ally, does he have the unilateral authority to do so?

ANSWER: The answer depends on where you stand, as a legal matter, on a president’s unilateral authority to use force.

For example, one such opinion from Oct. 23, 2002, regarding the use of force against Iraq, is extremely broad. Written by Jay Bybee, then-assistant attorney general for the Office of Legal Counsel, the relevant part of the 48-page memo reads:

Accordingly, we believe that the President’s constitutional authority to undertake military action to protect the national security interests of the United States is firmly established in the text and structure of the Constitution and in executive branch practice.

Thus, to the extent that the President were to determine that military action against Iraq would protect our national interests, he could take such action based on his independent constitutional authority; no action by Congress would be necessary.

For example, were the President to conclude that Iraq’s development of [weapons of mass destruction] might endanger our national security because of the risk that such weapons either would be targeted against the United States, or would be used to destabilize the region, he could direct the use of military force against Iraq to destroy its WMD capability.

Or were it the President’s judgment that a change of regime in Iraq would remove a threat to our national interests, he could direct the use of force to achieve that goal.  Were the President to take such action, he would be acting consistent with the historical practice of the executive branch.

Another broad, but not as broad, Office of Legal Counsel opinion that also concluded that the president could use force unilaterally (i.e., with express authorization from Congress) can be found in this 2018 Syria opinion by Steve Engel.

There are a handful of other Office of Legal Counsel opinions that will be instructive to lawyers in the executive branch should this issue arise. Examples include:

A speech by Defense Department General Counsel Paul Ney on the domestic and international law basis for the 2020 airstrike that killed Qassem Soleimani is also useful to the analysis.

QUESTION: If Putin invades a NATO country and triggers Article 5, and the president finds that it is in the nation’s national security interest to respond militarily and such actions rise to the level of war, should President Joe Biden seek congressional authorization for the use of military force or, alternatively, seek a declaration of war under Article I, Section 8, Clause 11?

ANSWER: This is a policy question, not a legal question.

All countries enjoy the inherent right of self-defense. It would be impractical for the president of the United States to seek congressional authorization for the use of military force in an emergency situation. But sending the armed forces of the United States abroad to defend a NATO ally that is attacked by Russia would likely not be considered an emergency situation.

For those interested in reading more about the genesis of Article 5, the North Atlantic Treaty, and related law of war concepts, read this 2019 law review article by professor Michael Schmitt.