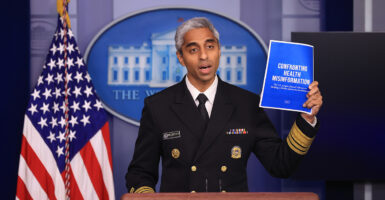 U.S. Surgeon General Vivek Murthy, seen here at the White House on July 15, said misinformation “can cause confusion, sow distrust, and undermine public health efforts, including our ongoing work to end the COVID-19 pandemic.” But the left has weaponized the label "misinformation" more broadly to almost anything it disagrees with. (Photo: Chip Somodevilla/ Getty Images)

The government’s Big Brother-style crusade to control what gets posted online continues apace.

The New York Times reported that Murthy asked the companies to reveal “exactly how many users saw or may have been exposed to instances of COVID-19 misinformation,” on top of providing the demographic data of those users.

The request follows on the heels of an advisory released last July, in which Murthy said misinformation “can cause confusion, sow distrust, and undermine public health efforts, including our ongoing work to end the COVID-19 pandemic.”

The term “misinformation” has become a bit of a catch-all in the COVID-19 era. It certainly can apply to actual untruths, such as that the COVID-19 vaccine contains microchips. But far more frequently, the term is weaponized against ideas the powers-that-be don’t like.

Take, for example, the ever-evolving tale of the Chinese lab-leak hypothesis regarding COVID-19.

Ground zero for the initial outbreak of COVID-19 was quickly determined to be Wuhan, China. The city is home to the Wuhan Institute of Virology, a lab known for conducting gain-of-function research into coronaviruses. When people started suggesting the two were linked, the response from health authorities and corporate media was instantaneous.

The hypothesis was lambasted as a racist conspiracy theory, and anyone who tried to disseminate it was quickly labeled a fringe kook or censored entirely on social media. Back in February 2020, Facebook banned an article from the New York Post claiming COVID-19 could have leaked from a lab.

Fast-forward a year to 2021 and suddenly the lab leak was no longer misinformation worthy of exile from the internet. The same outlets and experts who had gone to great lengths to smear anyone who dared go against their medical decrees were suddenly singing a very different tune.

Facebook itself was forced to recant, and announced it would stop removing posts that asserted COVID-19 leaked from a lab.

That brings us back to the issue of Murthy demanding data on “misinformation” from these Big Tech platforms. As the lab-leak saga demonstrated, the definition of what qualifies as misinformation is incredibly nebulous and can change with the political winds.

Murthy’s fishing expedition to find “misinformation” is for one purpose only; namely, control of our lives and of what we think.

As the pandemic dragged on, the government and Big Tech used the label of “misinformation” to ban ideas and outlets they dislike. They found that strategy to be incredibly effective and want to continue using it into the future.

The strategy is no longer limited to COVID-19, either. The popular streaming site Twitch announced March 3 that it plans to ban users who spread “misinformation” on other topics, including election fraud, and chillingly undefined “misinformation that may impact public safety.”

Once censorship becomes a common strategy against perceived “misinformation,” free speech is effectively dead. Don’t like what your political opposition is saying? Label it “misinformation,” ban it, and call it a day.

Many censorious tyrants have cloaked their actions in the name of “public safety” as Murthy has. And as those definitions of “public safety” rest on foundations as solid as shifting sands, it’s inevitable that the term “misinformation” will be abused further in the future.

For the sake of free speech, it’s essential that Murthy and the “misinformation” mob be countered at every turn. Americans should be empowered to discover the truth on their own, and not have their experiences curated by a biased bureaucracy or unelected tech czars.

The truth is out there. We don’t need Murthy to tell us what it is.