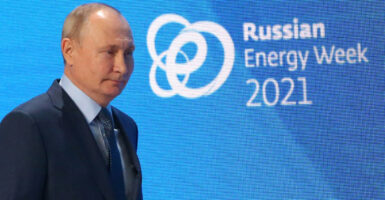 Freedom-loving nations should be ready to use every tool available to push back against the authoritarian greed of Russian President Vladimir Putin in his invasion of Ukraine, but energy sanctions are a double-edged sword. Pictured: Putin enters a hall in Moscow on Oct. 13, 2021, during the Russian Energy Week plenary meeting. (Photo: Mikhail Svetlov/Getty Images)

In the face of Russian President Vladimir Putin’s full-scale invasion of Ukraine, the idea of expanding sanctions on Russian energy is starting to gain bipartisan traction in Congress.

This is a complicated issue. Although freedom-loving nations should be ready to use every tool available to push back against the authoritarian greed of Putin, energy sanctions are a double-edged sword.

It’s worth thinking through the implications in order to come as close as possible to achieving the purpose of sanctions.

Market dynamics and pressure points vary for different energy resources—oil, natural gas, coal, uranium, and enrichment services among them. Here are some thoughts.

On one hand: Russia depends on energy exports as a major stream of state revenue. Energy is also a major lever of Russia’s political manipulation and bullying.

Europe’s response to Russian provocations now and over the last decade has been tepid and divided because Europe depends on energy from Russia for power, heat, and transportation. In 2019, Russia supplied 27% of the European Union’s oil and 41% of its natural gas. (By contrast, Russia accounted for only 8% of the oil imported by the U.S. in 2021 and none of the natural gas.)

It is entirely reasonable to want to respond to Putin’s aggression by cutting off that revenue stream and breaking that lever, as well as to send another powerfully clear political message.

As Sen. Joe Manchin, D-W.Va., stated: “It makes no sense at all for us to rely on energy from a country that is actively engaging in acts of war against a freedom-seeking democracy—Ukraine.”

On the other hand: Disrupting supply will drive up the prices of globally traded energy commodities. That’s a problem for American families and businesses, and it is a matter of good leadership to be honest about those costs.

However, high prices are particularly problematic because Russia benefits from higher energy prices, which keep filling those state coffers. Russia can sell its energy elsewhere on the global market.

For example, after Europe, China is the largest importer of Russian oil and a major customer for Russian natural gas. China reportedly inked a deal recently to buy 100 million tons of Russian coal over the next few years.

To be strategic, energy sanctions must be packaged with policies targeted to increase energy production in the U.S. and abroad, with the ultimate goal of increasing supply. (Global demand is not going down anytime soon.)

The surest way to dilute the Russian energy revenue stream is not only to stop being a customer but to flood the market with affordable, reliable energy. For example, a U.S. ban on imports of Russian crude oil and petroleum products should be packaged with a policy to hold immediate lease sales on federal lands and waters for oil, natural gas, coal, and critical minerals.

To improve the efficient delivery of energy and reduce the impact on coastal states, Congress should pass legislation (or at minimum seek a presidential waiver) to repeal or amend the Jones Act to allow ships built, manned, and flagged by NATO allies, Australia, Japan, and South Korea to help deliver energy between U.S. ports.

Dozens more actions should be taken to clear out regulations that increase the cost of exploration, production, delivery, financing, and consumption of conventional energy. But this would be a good start.

Europe also must take control of its energy security and reform energy and climate policies that have unnecessarily rejected proven technologies such as hydraulic fracturing (or fracking) to access energy resources and taxed or eliminated the use of natural gas, coal, oil, and (in some cases) nuclear energy.

The combination of decreasing domestic production of legitimate and useful energy while heavily subsidizing inherently intermittent resources has exposed Europe to more dramatic increases in energy prices in the past year and greater risk both to energy markets and political independence.

Even if accompanying policy reforms won’t have an immediate impact on supply, they will send an important political message to Putin and to energy markets for investors to finance energy exploration and production confidently and robustly.

The Biden administration already has sanctioned exports of refinery technology with a similar long view in mind.

Private energy corporations Exxon, Shell, and BP have announced withdrawals from Russian energy projects. They should be roundly applauded. They also should find the U.S. a welcome place to do the business of meeting the world’s energy needs.