‘Putin Chose This War,’ Biden Says. ‘His Country Will Bear the Consequences.’ 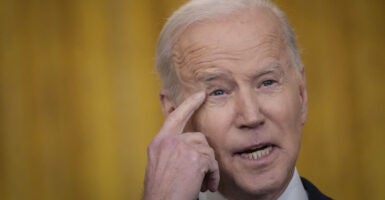 The U.S. will defend “every inch of NATO territory with the full force of American power," President Joe Biden says Thursday in the East Room of the White House, denouncing Russia's "unprovoked and unjustified" military invasion of neighboring Ukraine. (Photo: Drew Angerer/Getty Images)

President Joe Biden said Thursday that Russian President Vladimir Putin “has much larger ambitions than Ukraine,” and promised severe sanctions and a united front with U.S. allies as Russia mounts a full-scale invasion of Ukraine.

“He wants to, in fact, reestablish the former Soviet Union,” Biden said of Putin as Russian forces moved into Ukraine from multiple directions. “That’s what this is about, and I think that his ambitions are completely contrary to the place where the rest of the world has arrived.”

Russia launched its air and land invasion of the former Soviet republic early Thursday (late Wednesday in the U.S.), as Putin ignored international condemnation and warnings of sanctions from the United States and European allies.

Biden announced that along with European allies, more than $1 trillion in Russian assets are targeted by the sanctions and that all Russian assets in the United States will be frozen.

“Putin is the aggressor. Putin chose this war, and now he and his country will bear the consequences,” the president said, speaking in the East Room of the White House.

The U.S., he said, will make sure the Russian president becomes “a pariah on the international stage.”

However, the U.S. and European allies are not booting Russia out of the Society for Worldwide Interbank Financial Telecommunication, or SWIFT, the primary international banking system.

This potential move has been called a financial “nuclear option” that would cut Russia out of global finance. Nor have the U.S. and allies sanctioned Putin’s personal finances.

Biden also announced that the 30 member states of  NATO will confer Friday to map out the military alliance’s next move. He said 7,000 U.S. troops would be deployed to Germany.

“Our forces are not, and will not, be engaged in the conflict with Russia in Ukraine,” Biden said, but added that the U.S. will defend “every inch of NATO territory with the full force of American power.”

Putin, in public remarks, threatened “consequences you have never seen” for any countries that interfere.

Asked by a reporter whether this was potentially a reference to Russia’s large nuclear arsenal, Biden said, “I have no idea what he is threatening. I know what he has done.”

Biden, who had a teleconference with G-7 allies earlier Thursday, said he hopes the economic pain of confronting Russia, such as rises in already skyrocketing gas prices, will be minimal in the United States.

“We have purposefully designed these sanctions to maximize the long-term impact on Russia and to minimize the impact on the United States and our allies,” Biden said.

But the president stipulated that Putin won’t immediately change his mind.

“No one expected the sanctions to prevent anything from happening,” Biden said. “This could take time, and we have to show resolve so he knows what’s coming and so the people of Russia know what he’s brought on them.”

Four days ago, however, speaking in Munich, Vice President Kamala Harris said: “The purpose of sanctions has always been and continues to be deterrence,” and that sanctions “absolutely” would deter Putin even if he had made up his mind to invade.

Russian forces took over a major Ukrainian air base, Fox News and other media outlets reported, and had seized the Chernobyl nuclear plant, site of the world’s worst nuclear disaster in 1986.

Although Putin initially said he was sending “peacekeeping forces” into eastern regions of Ukraine that he claimed want to be independent, Russian forces shelled the capital of Kyiv, The Associated Press reported.

Ukrainian President Volodymyr Zelenskyy said Russian forces were moving into the second-largest city, Kharkiv, just over 12 miles from Ukraine’s eastern border with Russia. Russian forces also were advancing from the north on the city of Chernihiv.

“This is a dangerous moment for all of Europe, for freedom around the world,” Biden said. “Putin has committed an assault on the very principles that uphold the global peace. But now, the entire world sees clearly what Putin and his Kremlin allies are really all about.”