4 Reasons Why Americans Should Care About the Situation in Ukraine 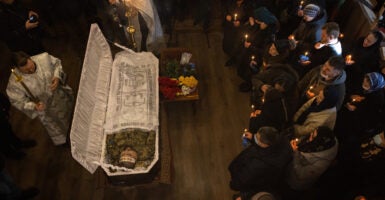 Ukraine has a right to defend its sovereignty against Putin’s aggression. Americans should support this right wholeheartedly. Pictured: Ukrainians attend the funeral of Capt. Anton Olegovich Sidorov, who died from a fatal shrapnel wound amid a wave of shelling by separatist rebels in the east, on Feb. 22, in Kyiv, Ukraine. Russian President Vladimir Putin recognized the independence of these breakaway regions and said he would send Russian "peacekeepers" to the area. (Photo: Chris McGrath/Getty Images)

Ukraine has been front-page news for the past few weeks. What began with President Vladimir Putin moving large numbers of forces to the Ukraine border deteriorated even further this past weekend, when Russia advanced its invasion into Ukraine.

But why should Americans care about what is happening in Ukraine, halfway across the world? Well, they should care for a few important reasons. Here are the top four:

A further Russian invasion of Ukraine could continue to put pressure on energy markets globally and in the U.S.

Oil and natural gas prices are at multiyear highs for Americans, driving up costs for heat, power, and transportation. For example, gasoline and diesel prices in the U.S. are the highest they have been since September 2014. The West Texas Intermediate price per barrel of oil cracked $96 on Feb. 22—the highest it’s been in seven years.

While there are a variety of contributing factors to high energy prices, Russia’s weaponization of energy has injected uncertainty in global markets that directly impacts Americans, keeps energy prices high, and heightens concerns for American allies in Ukraine and Europe about major supply shortages. Russia is the No. 2 producer of natural gas and No. 3 producer of oil in the world.

Americans should care because if a major war breaks out in Ukraine, it could spill over to neighboring countries.

Wars by their nature are messy and rarely respect political borders.  This could have an enormous economic impact on the U.S., including higher inflation, and, since almost all the neighboring countries belong to NATO, a Russian spillover holds the prospect of involving conflict between the U.S., our NATO partners, and Russia.

By virtue of Ukraine’s location in Eastern Europe, war in Ukraine that moved westward on the European continent would be toward Poland, a NATO ally and EU member state.

The United States and European Union account for approximately half of the world’s gross domestic product and nearly a third of international trade flows. So, if war were to overflow into Europe, then the world economy would be severely affected, including sending the U.S. (and other countries) into extremely high inflation and markets into chaos.

In addition, it would mean that the United States would be at war again because it is a NATO ally. Article 5 of the North Atlantic Treaty states that an armed attack on one or more NATO ally is an attack on all NATO allies. This is why the U.S. would have to be involved militarily.

Americans should care because of what is referred to as the three S’s: sovereignty, secure borders, and self-defense. These pertain to Ukraine just as much as to the United States.

In regard to Ukraine, the sovereignty and territorial integrity of the country should be prioritized and protected. In 2014, Russia invaded Ukraine. And since that year, Russia has illegally occupied Ukraine’s Crimean Peninsula, which accounts for approximately 7% of Ukraine’s landmass and more than half of its coastline, and continues to stoke a war in Ukraine’s eastern Donbas region.

And right now, Russia is threatening to violate Ukraine’s sovereignty and territorial integrity even more so. This is typical of Russia; in the past few decades, it has made a point to invade and partially occupy its neighbors. For example, Georgia and Moldova, two other Eastern European nations, were both invaded by Russia and continue to be partially occupied by Russian troops on their territory.

For Americans, this might be hard to picture. But, imagine if Canada or Mexico was an adversarial global power and was threatening to invade the U.S. and send troops to invade part of our national territory. That is practically unthinkable here in the United States, but it’s exactly what Ukraine is experiencing right now.

Secure borders are also important for Ukraine, as they are to the United States. One way to think of this in relation to the U.S. is the security on our southern border. The U.S. should care about Ukraine’s border security, especially because the country is one of our partners.

Self-defense also matters to Ukraine just as much as it matters to Americans. Self-defense is an integral part of national security, and Americans should be supportive of Ukraine’s right to defend itself against Russia. The U.S. should do whatever it can to help Ukraine in its self-defense.

Finally, Americans should care about the situation in Ukraine because Putin has been doing everything he can to undermine our interests for the more than 20 years he has been in power over Russia. Ukraine has expressed a desire to emulate the U.S. and has put in place a working democracy. We should help our friend in its time of need against our adversary. If Putin is essentially given a free pass to Ukraine by the U.S. and the West, who knows what he will do or where he will go next.

What Happens in Ukraine Affect Us All

Don’t believe any false narratives saying the U.S. shouldn’t care about what is happening in Ukraine. The U.S. cannot ignore the situation. When you consider the factors outlined above, the situation hits close to home. What happens with Ukraine affects us all.

Americans should care about Ukraine not just because we could be hit with higher gasoline prices or grocery bills, but because Ukraine is a partner of the United States, and we cannot let it down. The world is taking note.