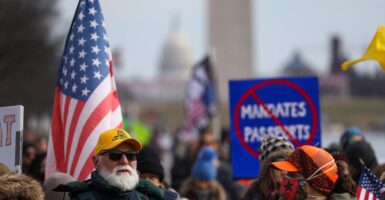 Democrats are losing the culture wars in key areas, a Politico-Morning Consult poll released Wednesday found, due in part to pandemic fatigue and distrust in the federal government’s COVID-19 response.

Although Democratic voters are still divided on the issue, the majority of voters are in favor of lifting mask mandates, the polling data shows.

“Democratic governors have been trying to get ahead of pandemic fatigue by lifting mask mandates around the country. The country is moving further and further in that direction,” according to Politico. “Forty-nine percent of voters want mask mandates removed, while 43% say it is too early for states to rescind their mask mandates.”

The poll results also found that support for a combination of masks and vaccines has significantly dropped in recent months.

“Yes, a plurality of voters (49%) still feel that local governments should be encouraging COVID-19 vaccinations and masks in indoor public spaces, but that’s down 7 points since September,” the poll found. “In the teeth of the pandemic, anti-masking sentiment was a fringe obsession limited to the right. But with the omicron surge subsiding, it’s now mainstream—and growing in popularity.”

Pandemic frustration has seeped into other areas of culture as well, and Republicans have been waging war successfully on critical race theory, open borders, and police funding, according to separate Democratic Congressional Campaign Committee poll results cited by Politico. Even in left-leaning cities, parents are fed up with pandemic politics.

“In San Francisco on Tuesday, there was new evidence of what happens when COVID fatigue bleeds into the culture wars,” the Politico report states. “Residents in the liberal bastion overwhelmingly voted to recall three board of education commissioners who angered parents last year by focusing on renaming schools rather than reopening them.”

The Politico poll comes on the heels of a recent Monmouth University poll of 794 U.S. adults, which also found an increasing frustration among Americans in the federal government’s handling of the pandemic.

Some 70% of those polled agreed that “it’s time we accept that COVID is here to stay, and we just need to get on with our lives.”

The poll, which was conducted by telephone Jan. 20-24, found that although many Americans are still worried about the virus, they are frustrated with the government’s response. The poll also found that a significant portion of the population is concerned about the vaccine.

While nearly half of American adults (45%) report getting a booster shot, a significant number (37%) remain unlikely to ever do so—which includes 17% who remain opposed even to getting the initial vaccination.

Patrick Murray, director of the Monmouth University Polling Institute, said while worries about COVID-19 haven’t gone away, there’s an increasing realization that the virus can’t be controlled in the ways experts initially predicted.

“We still see public support for maintaining some degree of public safety around COVID. However, there appears to be an acknowledgment that federal measures have not been effective, or at least have failed to be widely accepted,” Murray said.

“Just 43% say Biden has done a good job on this, while 53% say he has done a bad job—the first time his rating on this metric has been underwater since he took office,” the poll found. “Public opinion on the president’s handling of COVID was evenly split a month ago (46% good job and 46% bad job) and was consistently positive in polls prior to that.”