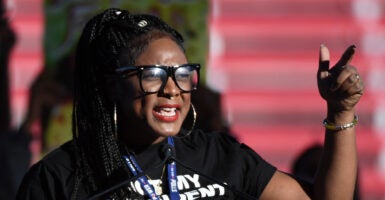 If you’re a woke journalist, how would you frame allegations of financial misconduct against the main Black Lives Matter organization?

You could ignore these financial questions about the Black Lives Matter Global Network Foundation, sure. Or you could frame the allegations the way New York magazine has in a recent article: by absurdly quoting people saying that the organization’s corruption proves its leaders are capitalists.

For good measure, also suggest that Black Lives Matter founders Alicia Garza, Patrisse Cullors, Opal Tometi, and Melina Abdullah haven’t led the mayhem of the past few years, but instead inflated their role. That has been a media fabrication all along. These women don’t represent a large, beautiful movement that fights for social justice.

This, I kid not, is how investigative reporter Sean Campbell is threading this needle in his article for New York magazine. After all, reports of malfeasance cannot be swept under the rug, although both The New York Times and The Washington Post are trying hard to do so.

So apologists for the main Black Lives Matter organization may have to get out the facts on the alleged wrongdoing, but they ignore the founders’ exceedingly well-documented Marxist training and blame their covetousness on capitalism.

Campbell did not even have the courtesy to mention that the story was broken by the Washington Examiner’s enterprising reporter Andrew Kerr. The scoop by Kerr included a missing $60 million, the absence of anyone at the helm of the foundation for almost a year, and the fact that it spent $8 million Canadian dollars to buy the former Toronto headquarters of the Communist Party of Canada.

So much for honesty among thieves and journalists. First, however, let’s give credit where it is due: Campbell did several noble things. He is forthright in reporting that the Black Lives Matter Global Network Foundation has not helped victims of any police action, and that it is quite opaque with its finances. It is the first time I have seen a major publication state these realities.

Campbell quotes Tory Russell, an activist in Ferguson, Missouri, as saying: “The movement that has been catapulted into the limelight has forgotten about Ferguson and the freedom fighters [who] have literally given their lives to the struggle.”

Campbell also quotes others being open about “a deeply troubling lack of financial transparency” at the Black Lives Matter Global Network Foundation, and himself writes: “BLMGNF has never been a model of fiscal clarity.”

Such courage does it take for a writer at a major publication on the left to write all these things that Campbell felt the need to explain that he is a black man raised by a single mother, “and police have pointed guns at me.”

But credit ends about there. Campbell, most egregiously, engages in revisionist history by leading the reader to believe that Garza, Cullors, and Tometi have merely stolen the limelight from the Black Lives Matter movement.

For example, his New York magazine piece quotes a disgruntled former BLM activist, Ashley Yates, saying that at a 2015 conference at Cleveland State University to discuss the future of the movement, “organizers confronted Cullors, saying she and her co-founders needed to do more to correct media reports that their organization was orchestrating the movement.”

Campbell writes: “Yates says she later pressed Cullors, Garza, and Tometi on the matter privately. ‘They said, “It’s not really us; the media’s doing it, and we can’t help what they do.” I’m like, ‘Okay, but it came out of your mouth.’”

In this telling, Cullors, Garza, and Tometi’s key work in organizing socialist groups in Ferguson in 2014, after a police officer there fatally shot Michael Brown, was really accidental.

The three apparently surfaced in Ferguson, “branding their effort as Black Lives Matter,” writes Campbell, quoting Yates as saying: “No one really was clear on what they were there for. No one was really even clear on who they were.”

This 2014 article in a publication called In These Times—the communist magazine founded by Herbert Marcuse, Julian Bond, and Noam Chomsky—gives a pretty good account of Garza’s key role in using Brown’s killing to launch a nationwide and worldwide network that has made us less free today.

Yet even the founding of BLM in 2013 seems to be open to question now.

“As the story goes,” Campbell writes, “Garza was drinking bourbon when news broke that George Zimmerman had been acquitted of murder charges in the killing of Trayvon Martin, and she took to Facebook to express her grief. ‘Black people. I love you. I love us. Our lives matter,’ she wrote. Her friend Cullors replied with a missive of her own, closing with #BLACKLIVESMATTER.”

“They have a really inflated sense of self-importance in terms of the movement,” Howard University law professor Justin Hansford is quoted as saying.

Campbell also quotes another disgruntled activist, Keyanna Celina, as saying: “I think it is important, concerning Black Lives Matter, that they more or less be identified as capitalists.”

On and on like this goes the essay in New York magazine, for nearly 4,200 words. Nowhere does the deep Marxism of Garza, Cullors, and Tometi appear. Nowhere will the reader find their training for years at centers set up by the likes of Eric Mann and Harmony Goldberg, the first a Maoist and Soviet apologist and the latter an expert on Italian Marxist philosopher Antonio Gramsci’s strategy of effecting revolution by preceding it with ideological indoctrination.

And yet it is the Marxism that ties it all together.

For years, people like me have been writing exactly what Campbell lays out: The creators of the Black Lives Matter Global Network Foundation are not interested in social justice or black lives. We know that not only because of what Russell and others have been saying.

BLM leaders are also impervious to the thousands of black lives that have been lost to violence in the same cities where BLM demonstrated or rioted because of something called “the Ferguson Effect.”

Social justice and racial equity are instead just a façade for a much larger project: to destroy capitalism and the American system, including representative democracy.

That’s why Garza tells people that “we all have work to do to keep dismantling the organiz­ing principle of this society,” or Cullors says that she and Garza are “trained Marxists,” or why Tometi praises Venezuela’s “participatory democracy.”

That’s why socialist organizations sent Garza, Cullors, and Tometi to Ferguson, to strategize with other socialists.

From the start, the mainstream media has covered for, not covered, the Black Lives Matter Global Network Foundation. Campbell’s rendition of the BLM scandal is another example of this.

Journalists eventually will have to report the financial misconduct by the BLM foundation. But at least now we know how this could occur: because its leaders are capitalists.