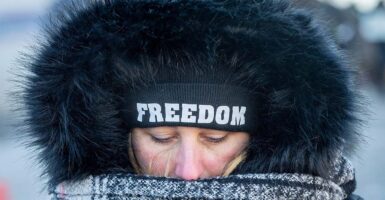 After two years of strict lockdowns and mandates, fed-up Canadians are taking a stand against their government. Pictured: A woman protests COVID-19 mandates in front of Parliament on Jan. 29 in Ottawa, Canada. (Photo: Lars Hagberg/Getty Images)

As Canadian Prime Minister Justin Trudeau invokes emergency powers in an attempt to quell the “Freedom Convoy,” protesters remain in Ottawa, Canada, for the third week in a row.

Protesters have stated they will remain in Ottawa until all COVID-19 mandates are lifted. Images from the protests highlight the escalating tensions between the Canadian government, police, and the truckers. Here are 18 images depicting protesters in Ottawa, Toronto, and Windsor, Canada.