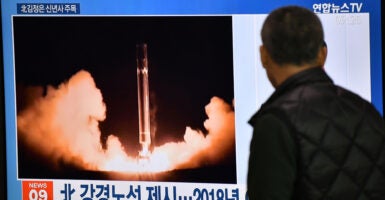 By the end of January, North Korea had conducted seven missile tests already in 2022, including that of an intermediate-range ballistic missile, which could potentially reach Guam. Pictured: Two years ago, at a railway station in Seoul on Jan. 1, 2020, a man watches a television news program showing file footage of an earlier North Korean missile test. (Photo: Jung Yeon-je/AFP/Getty Images)

Jacob Montoya is an intern in the Davis Institute for National Security and Foreign Policy at The Heritage Foundation and a member of Heritage's Young Leaders Program.

Alongside so many other threats to U.S. interests, weapons of mass destruction is another area that will be of deep concern this year.

Indeed, there are good reasons to be nervous about threats from weapons of mass destruction arising not only from rogue states such as Iran, North Korea, and Syria—but also from great powers such as China and Russia, too.

The regime in Iran continues to move closer to building a nuclear weapon, which would threaten its Arab neighbors, American ally Israel, and possibly eventually even the United States.

For years now, Tehran has been violating the 2015 Joint Comprehensive Plan of Action, aka “the Iran nuclear deal,” which the Trump administration disavowed due to the pact’s serious flaws.

Some analysis asserts that Iran may be just a short time away from having the necessary amount of highly enriched uranium to build a bomb—maybe even a few bombs.

Questions do exist about whether Iran can turn that highly enriched uranium  into a workable warhead, but with the largest missile arsenal in the Middle East, it does have a way to get a nuke to a regional target.

Tehran is also working on expanding the range of its ballistic missiles through its “civilian” space program that one day could enable it to launch an ICBM toward the U.S.

With diplomatic talks to restore—or replace—the Iran nuclear deal failing, Iran could be looking at becoming the 10th member of the once-exclusive nuclear weapons club at some point soon.

North Korean leader Kim Jong Un hates to be ignored, especially by his archenemy, the U.S. He’s literally gone “ballistic” as a result of that need for attention already in 2022.

Indeed, by the end of January, North Korea had conducted seven missile tests, including an intermediate-range ballistic missile, which could potentially reach Guam.

More troubling, the North Korean regime “implicitly threatened” to begin nuclear and ICBM testing again, which its hasn’t done since 2017.

With denuclearization talks going nowhere, both are a distinct—and destabilizing—possibility.

Pyongyang is thought to have some 30 to 60 nuclear weapons in its arsenal that could be mated to a variety of ballistic missiles for strikes against targets in the region—or even the United States.

Beijing is expanding and diversifying its nuclear capabilities on an unprecedented scale. The commander of U.S. Strategic Command, Adm. Charles Richard, called it “breathtaking.”

Discovery of the construction of nearly 250 new land-based ICBM silos in the summer of 2021 undermines the idea that China is still adhering to its long-standing “minimum deterrent” nuclear force.

China has also sent its nuclear strike force to sea on submarines and is developing a strategic bomber leg as part of what will soon be a nuclear triad.

Beijing is also developing unique ways to deliver its nukes.

Last year, China stunned many by testing a fractional orbital bombardment system, which circumnavigated the globe before releasing a nuclear-capable hypersonic glide vehicle at a target.

That increase in Beijing’s nuclear numbers and capabilities raises the specter of parity or near-parity with the U.S.—or even superiority.

That’s a chilling thought in an era of great power competition and the level of strategic distrust that exists between Washington and Beijing.

Besides modernizing its nuclear force, Russia is also diversifying it, testing and deploying a number of novel nuclear weapons.

Add to that a concern about Russia’s doctrine for its nonstrategic (i.e., low-yield) nuclear weapons, aka battlefield or tactical nukes.

Moscow’s “escalate to deescalate” doctrine contemplates using a tactical nuke in a conventional conflict with NATO to end resistance to its aggression by crossing the nuclear threshold.

Considering Russia’s belligerence in Europe, those small nukes are a big problem for NATO.

Weapons of mass destruction also include chemical and biological weapons—and their recent use is deeply troubling. Indeed, Israel reportedly struck targets in Syria that might be involved in the production of chemical weapons.

The Damascus regime has already used chemical weapons against civilians in Syria’s civil war—and could use them in a conflict with Israel.

Also, don’t forget Russia’s use of a nerve agent against political opponents Sergei Skripal and Alexei Navalny or North Korea’s use of VX nerve agent to assassinate Kim’s half-brother.

While we’ve not seen a biological weapon used, the COVID-19 pandemic painfully reminds us of the potential power of a purposely unleashed biological pathogen.

No one likes to think about these horrific weapons, especially in the hands of troubling regimes, but unfortunately, due to their destructive power, we’re going to have to in 2022.