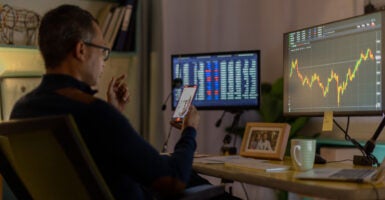 Inflation makes governments rabid. They lash out for scapegoats to blame for policymakers’ failures.

Having failed to convince the American people that greedy meatpackers and grocery stores are causing inflation in everything from used cars to houses to gasoline, the administration and Congress are now going after Americans who use cryptocurrencies with tools that could easily install a China-style surveil-and-control system on all of your financial accounts.

Last week the Biden administration announced an upcoming executive order to coordinate anti-crypto rules across government agencies, including the Securities and Exchange Commission, the Office of the Comptroller of the Currency, and the Commodity Futures Trading Commission.

The announcement stressed national security, which has been the go-to excuse for bureaucrats who don’t like Bitcoin—ironic considering the rate of criminal use is between six and 15 times higher in the traditional banking system than it is in Bitcoin. But, of course, traditional banks have more friends in Washington.

In other words, crypto appeals to the exact people traditionally excluded from the traditional financial system, but, alas, black 20-somethings don’t have senators on speed dial.

Why do people buy crypto? Many see it as a way to protect against a falling dollar—for them, crypto is a digital gold—one that is as anonymous as real gold or real cash, but one that can never be seized.

Today, with federal spending and the Federal Reserve driving annual inflation to 7%, a dollar only buys 87 cents of what it bought five years ago, while a Bitcoin buys 30 times what it did 5 years ago. If the economy continues sliding into a 1970s-style stagflation, millions more will want to protect themselves with a noninflationary money.

Of course, most Americans don’t own crypto in 2022, just as most Americans didn’t own gold in the 1970s. But, as with gold, the mere possibility of exit acts as a policy brake on soaring deficits and runaway inflation lest people flee the dollar. This policy brake is critically important as governments feed at the trillion-dollar trough: To illustrate, without the ability to print unlimited dollars, no government would have imposed the draconian lockdowns that crashed the world in 2020.

After all, without money-printing, a government facing a 50% drop in tax revenue—and the laid-off government workers that implies—will pause and say it can’t be done. Alas, governments did print money and, $6 trillion in magic money later, here we are. Right now, thousands of Canadian truckers would be relaxing at home with their family had governments been unable to inflate.

Even if you don’t own or care about crypto and inflation, the much wider issue is what policymakers are using the scapegoat to push: a full-blown surveillance state.

The recently proposed America COMPETES Act—which might as well be called the “America CONCEDES Act,” given its many handouts to Chinese communists—originally listed a litany of financial crimes, from ransomware to terror, to justify unlimited surveillance and control. These would apply to not just crypto, but every financial transaction you make, without due process and with the authority to close any of your financial accounts with no formal controls whatsoever.

The proposal, which had already been recycled from previous bills, and may well be in President Joe Biden’s upcoming executive order, amounts to riding crypto scaremongering to impose a surveillance panopticon. Americans are already exposed to politically motivated financial persecution from the government, from the IRS’ targeting of conservatives to recent cancellations of bank accounts and credit cards of conservatives.

Using scapegoats to impose collective punishment on all Americans is a standard political trick, and this administration and Congress are using crypto for just that: to build the China-style system of surveil-and-control they crave.

Any government that can’t manage inflation should at least allow Americans to protect themselves, but we must all stand strong against China-style financial totalitarianism, whatever the excuse this week.