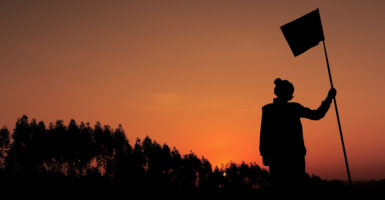 The communist regime in China was once hostile to the game of golf, with revolutionary leader Mao Zedong calling it “a sport for millionaires.” After taking power in 1949, the dictator banned all Communist Party members from joining a golf club.

Golf began to have a resurgence in China in 1984. But as recently as 2015, Chinese President Xi Jinping’s crackdown on vice lumped golf in with drugs, gambling, and prostitution.

China’s war on golf seemed to end when the Professional Golfers’ Association signed a 20-year deal with the sports management company Shankai Sports, beginning in 2018, to manage operation of PGA Tour Series-China.

Financing the deal was a $45 million investment from Yao Capital, a private equity firm founded by former NBA star Yao Ming of the Houston Rockets.

In recent years, China has aggressively used sports to expand its global influence and will host the Winter Olympics, which open Friday.

The conservative ethics watchdog group says it intends to file a complaint with the Internal Revenue Service.

“The sports leagues are given monopoly power; in this case, the PGA has monopoly power over the sport of golf,” Tom Anderson, director of the National Legal and Policy Center’s Government Integrity Project, told The Daily Signal. “Sports are how you build a community and build a culture. But you have a nonprofit handing this over to a country that will weaponize it.”

The arrangement is part of China’s playbook, James Carafano, vice president for national security and foreign policy at The Heritage Foundation, said in an interview.

“The Chinese purposefully look to take any national or international institution and essentially make it an extension of Chinese power and influence,” Carafano told The Daily Signal, which is Heritage’s multimedia news organization.

The PGA Tour did not provide complete operational control of the China series to Shankai Sports, PGA Tour spokesman Laury Livsey said in an email after initial publication of this report.

“The series operated in partnership with Shankai, with PGA Tour employee Greg Carlson serving as the series’ executive director,” Livsey told The Daily Signal in response to several emails and a phone call Monday and Tuesday, adding:

Mr. Carlson lived in China, attended every tournament and oversaw and had final say on all tournament operations. Chief Referee Jamie Wiles, also a PGA Tour employee, was the arbiter over the competition and setup of each golf course where PGA Tour Series-China conducted tournaments. Mr. Wiles resided part time in China. The PGA Tour maintained control, again in conjunction with Shankai, of the series’ business operations from its headquarters in Ponte Vedra Beach, Florida.

The Professional Golfers’ Association praised the 20-year deal when it was reached in December 2017.

“PGA Tour China is truly thrilled to be partnering with Shankai Sports on the PGA Tour Series-China,” Greg Gilligan, vice president and Greater China managing director for PGA Tour, said in a public statement at the time. “Shankai is a world-class organization with great experience [in] connecting the expectations of international sports bodies with an understanding of the Chinese market.”

PGA Tour Inc. is based in Ponte Vedra Beach, Florida. It is categorized as a 501(c)(6) under the U.S. Internal Revenue Code, which is defined as a business league, chamber of commerce, real estate board, or, in this case, a sports league created to improve business conditions.

As a nonprofit, PGA Tour must file a Form 990 with the IRS in order to keep its tax-exempt status. The PGA Tour Inc. doesn’t appear to disclose the deal with Shankai Sports or Yao Capital on its Form 990, which Anderson said the National Legal and Policy Center will ask the IRS to investigate. Anderson contends that the PGA Tour Inc. should disclose this information in the Schedule F portion about activities outside the United States.

Form 990, filed annually, is supposed to disclose financial information, but neither PGA Tour’s form for fiscal year 2020—the most recent—nor the one for fiscal year 2018—the year after the deal—refers to Shankai or Yao.

This was not required because the China tour is a separate entity, Livsey, the PGA spokesman, said.

“The PGA Tour established a separate entity, based in Beijing, China,” Livsey said. “The PGA Tour’s Form 990 only relates to the tour’s activity, and the activity of a subsidiary would not be reported on the PGA Tour’s Form 990. In any event, it is not a requirement that organizations identify or disclose ancillary contracts or deals.”

Part of Form 990 is Schedule F, where a nonprofit should provide information on activities conducted outside the United States at any time during the tax year. The IRS explains:

The IRS states that an organization answering “yes” to lines 14, 15, or 16 on Part IV of Form 990 is required to provide information in Schedule F.

—Line 14a, which asks, “Did the organization maintain an office, employees, or agents outside of the United States?”

—Line 14b, which asks, “Did the organization have aggregate revenues or expenses of more than $10,000 from grantmaking, fundraising, business, investment, and program service activities outside the United States, or aggregate foreign investments valued at $100,000 or more?”

—Line 15, which asks whether the organization reported “more than $5,000 of grants or other assistance to or for any foreign organization?”

PGA Tour’s completed Schedule F contains no reference to either Shankai or Yao. It does refer to spending $805,909 on “East Asia and the Pacific.”

“PGA Tour Inc. ensures that foreign organizations receiving grants are the equivalent of a U.S. exempt organization or an organization whose purpose is in line with the PGA Tour’s exempt purpose prior to distributing grants. Grants are not monitored after insurance because of initial due diligence,” the nonprofit says on its Schedule F, adding:

The PGA Tour Inc.’s principal mission is to promote the sport of professional golf through sanctioning and administering golf tournaments and promoting the common interests of touring golf professionals. This is accomplished by providing competitive earnings opportunities for members of the PGA Tour Inc., PGA Tour Champions, Korn Ferry Tour, PGA Tour Latino America, Mackenzie Tour Canada and PGA Tour Series China; protecting the integrity of the game; and helping grow the reach of the game in the U.S. and around the world.

“Working with PGA Tour China and managing the series as part of the path to the PGA Tour is a huge responsibility and one we’re determined to fulfill,” Shankai Sports Chairwoman Hong Li said in a written statement as part of the  December 2017 announcement. “Shankai Sports has worked with many of the world’s leading sports organizations and we always feel a duty to do our best and help raise the profile of sport in China.”

Shankai’s press release on the PGA Tour deal was viewable in English online as recently as Friday, but on Monday the link did not function. The information from the original release remained available on news sites, however.

The PGA Tour has been transparent about the deal for the China series, Livsey said.

“On Dec. 7, 2017, the PGA Tour and Shankai jointly distributed a press release in both English and Chinese announcing the partnership between the two entities,” Livsey wrote in the email to The Daily Signal. “The announcement was widely distributed to media outlets in the United States.”

Livsey said each subsequent press release has included this information:

Heritage’s Carafano said the Chinese Communist Party has what it calls “civil-military fusion.”

This means that every instrument of Chinese society is intended to perpetuate the goals and interests of the Chinese Communist Party, Carafano said, adding:

The sports institutions are the same way, not even just national ones, also international ones, as we saw the Chinese try to infiltrate [U.S.] universities and try to influence university behavior. They are going to do the same thing with the NCAA, the PGA, the NFL. People famously know about the NBA self-censoring because of their interest in China.

Sports leagues are essentially monopolies, which makes them both powerful and vulnerable, Carafano told The Daily Signal.

“They are vulnerable. In a sense, they have a business monopoly,” he said. “They are, on one hand, invulnerable to external government pressure and, from some respects, market pressure. But on the other hand, they are completely vulnerable to foreign investment and exploitation.”

This report was updated and expanded within five hours of publication to include a response from a PGA Tour spokesman.