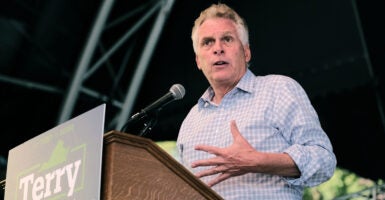 Some observers think then-Virginia Democratic gubernatorial candidate Terry McAuliffe—seen here at a campaign rally on Oct. 24 in Charlottesville, Virginia—lost the race when in a Sept. 28 candidates debate he said he didn’t “think parents should be telling schools what they should teach.” (Photo: Eze Amos/Getty Images)

Jeff Rhodes is vice president for news and information at the Freedom Foundation.

As a rule, leftists are pretty stealthy about expressing their true feelings, preferring to pose as “moderates” until the time comes to actually impose their radical agendas.

That results in a good deal of dishonesty when it comes to their message, but every so often a whiff of candor does leak out—only to be quickly suppressed.

The Michigan Democratic Party made just such a gaffe last week when it posted on Facebook the unattributed sentiments of one of its leaders:

Not sure where this ‘parents-should-control-what-is-taught-in-school-because-they-are-our-kids’ [narrative] is originating, but parents do have the right to send their kids to a hand-selected private school at their own expense if this is what they desire.

Predictably, the post was scrubbed within hours and replaced with a bland disclaimer:

We have deleted a post that ignored the important role parents play—and should play—in public schools. Parents need to have a say in their children’s education, end of story.

And just as predictably, it was the end of the story as far as the media were concerned.

Perhaps remembering how Virginia Democrat Terry McAuliffe last fall scuttled his own gubernatorial campaign by smugly proclaiming that he didn’t “think parents should be telling schools what they should teach,” newspaper editorial boards across Michigan and the rest of the nation evidently convinced themselves the second, sanitized post more accurately reflected the party’s sentiments.

Parents, however, are getting better at sifting through the education establishment’s lies. That’s a good thing, because they’re more brazen than ever.

The insistence, for example, by radical leftist teachers unions that students be force-fed toxic critical race theory nostrums over parents’ objections illustrates how much credence liberals give to dissenting voices far more vividly than phony posts from party hacks.

Just one year ago, educational leaders, media elites, and leftist politicians were assuring parents that critical race theory was a complicated area of study only taught in law schools. But with students banned from the classroom during the COVID-19 pandemic, parents got to observe firsthand the propaganda streaming into their living rooms via remote-learning lessons.

Immediately, the narrative changed from “There is no critical race theory in K-12 classrooms” to “If you don’t like it, you’re a racist.”

School board meetings became more contentious as parents of all demographics showed up by the hundreds and even thousands to express their displeasure at what their children were being taught.

School board members across the country began imposing more and more restrictions on how many people could speak at their meetings and for how long.

Ultimately, they began canceling public meetings altogether so they wouldn’t be confronted by the angry people paying their salaries.

President Joe Biden’s attorney general, Merrick Garland, even issued a memo comparing those parents to “domestic terrorists” for refusing to stand idly by as their tax dollars are used to transform public schools into socialist indoctrination centers.

Garland eventually walked back his words, and the National School Boards Association disavowed the letter, but the damage was done.

Members of Congress and parents groups are calling for Cardona’s resignation, but like their allies in Michigan, Garland and Cardona aren’t on the hot seat for failing to articulate their true feelings. It’s because they most certainly did.

The past year has demonstrated all too clearly for parents and well-meaning teachers alike just how badly our educational system can unravel when controlled by leaders who care more about flexing their power than about the students who suffer significant developmental, social, and educational setbacks as a result.

As we mark National School Choice Week (Jan. 23-29), we applaud the parents fighting for and taking back control of their kids’ education, as well as the teachers who are leaving their radical unions behind and no longer pushing a political agenda they don’t support.